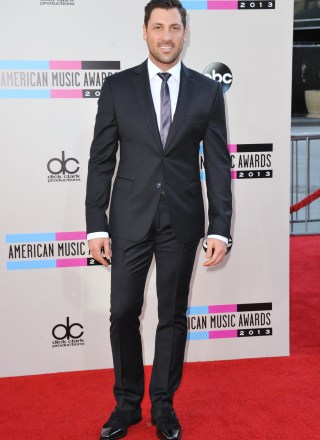 Share Tweet Pin Email
Maksim Chmerkovskiy has his parents to thank for his toe-tapping TV career as they decided he needed a hobby when he was 4 and enrolled him in his first dance class. The Dancing With The Stars pro preferred to play basketball, soccer and baseball as a teen, but never gave up dance completely except for the months he was hospitalized after a horrible skiing accident that led to a metal rod in his upper leg. Being told he would never cut a rug again motivated him to endure months of therapy and was competing again in less than six months. After moving to America 14 years ago, his family opened Rising Stars Dance Academy and he began competing in ballroom contests regularly, appearing on Broadway and working as a choreographer. He then opened a chain of Dance With Me USA studios on the East Coast. He first appeared on DWTS in season 2 and has shown up on The Exes and General Hospital. He was engaged briefly to fellow DWTS pro Karina Smirnoff in 2009 and then the season 18 champ moved on with costar Peta Murgatroyd from 2012 to 2013. Following their split, he dated model Kate Upton before rekindling with Peta in 2015.