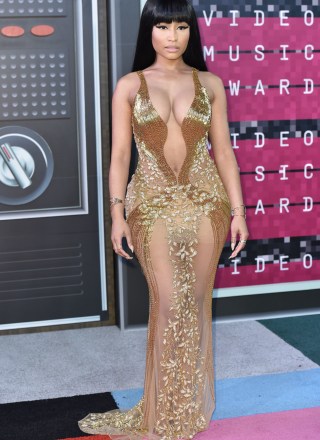 Femcee Nicki Minaj grew up in a troubled home, but managed to graduate from a Manhattan performing arts high school and supported herself as an administrative assistant and Red Lobster waitress while singing background vocals and hip-hop hooks and refining her rap-writing skills. On the success of three mixtapes between 2007-09, she quickly became the first lady of Lil Wayne's label Young Money Entertainment and impressed fans and critics alike with her 2010 debut Pink Friday, which peaked at No. 1, was certified platinum and contained several uber-successful singles like "Super Bass" and "Moment 4 Life." In fact, she's the first female solo artist to have seven singles on the Billboard Hot 100 at the same time. Billboard's 2011 Rising Star award winner's fast flow, use of alter-egos and accents, wild wigs and outlandish costumes are her trademarks and she used them to get to the top of the charts again with Roman Reloaded and "Starships" and to nab endorsements for the likes of Adidas, MAC Cosmetics, Beats Electronics and Pepsi.  The very active Tweeter turned down an offer to judge "The X Factor" opposite tour mate Britney Spears, but accepted one for the 12th season of "American Idol" where her bickering with co-panelist Mariah Carey was legendary. Although working on her third album, she's expressed more interest in acting lately. After voicing a character in "Ice Age: Continental Drift," she nabbed a role alongside Cameron Diaz and Kate Upton in "The Other Woman."