For a celebrity, any holiday can bring out red-carpet-worthy fashion, and New Year's Eve is no exception. Wonderwall.com is looking back at some of top style choices celebs have made on New Year's Eve pasts… starting with this model… Hailey Bieber rang in 2017 in a white-hot minidress with a sweeping silver jacket and neutral booties. Her look was chic and her hair and makeup perfectly completed the cool look.

Bella Hadid ushered in 2017 wearing a shimmery see-through two-piece set that felt perfect for a night of champagne and celebration.

RELATED: Fashion hits and misses of 2021

As she rang in 2015, Taylor Swift performed in a sparkly outfit totally fitting for the holiday. The music star, who even has a song called "New Year's Day," sang in Times Square wearing black pants with a single glittery stripe running down her legs, a black bralette and an ultra-sparkly silver blazer.

In December 2015, Carrie Underwood rang in 2016 in Times Square in a wintery turquoise suit. While the look was a bit more professional than more traditional NYE fashion, the sheen on the suit and the unique color made it a win.

Nicki Minaj celebrated the start of 2017 in Miami in a jumpsuit positively made for the holiday. Knowing that you can never have too much glitz on NYE, Nicki didn't hesitate to add silvery strappy heels and diamond jewelry to her ensemble.

Hailee Steinfeld showed some serious skin when she performed on "Dick Clark's New Year's Rockin' Eve with Ryan Seacrest" in Los Angeles on Dec. 31, 2016. The singer-actress pulled off edgy NYE fashion flawlessly with generous cut-outs on her black minidress along with a pair of fishnet tights.

Back in 2011, Lady Gaga was constantly upping her crazy fashion choices. As she rang in 2012, she leaned heavily into a "ball drop" theme with an elaborate rhinestone-covered circular mask that screamed New Year's Eve in Times Square.

Emily Ratajkowski didn't let 2020 or a pregnant belly keeping her from looking impossibly cool on New Year's Eve. The model-designer's lime green dress was a unique choice but, like just about everything else, looked excellent on her and her growing baby bump.

Dua Lipa was an absolute disco ball stunner when she rang in 2020 in this dazzling minidress.

Mariah Carey sang in 2018 in a classically over-the-top but well-fitting rhinestone-covered sheer dress warmed up with an oversized white fur coat. All we want for the New Year is this look!

Rihanna's gold lamé bikini and matching sarong were perfect for a poolside New Year's Eve party in 2021. We love how she upped the edginess of the look with thigh-high gladiator heels.

Times Square on NYE often necessitates a careful balance between warmth and glitz, and in 2014, Miley Cyrus nailed it. Her gold two-piece set was made even more over the top and fun with the addition of an enormous white fur coat.

Kendall Jenner hosted a New Year's Eve party at the end of 2016 at a West Hollywood nightclub. She skipped the rhinestones and sparkles, instead opteing for a lingerie-inspired lace-trimmed minidress and silky animal-print robe.

Chrissy Teigen was all smiles — despite the chilly New York temperatures on Dec. 31, 2014 – when she celebrated New Year's Eve wearing in a black minidress, over-the-knee boots and a chic fur coat.

Jennifer Hudson showed leather has an important role in NYE fashion when she performed in Los Angeles on Dec. 31, 2013, in this minidress and sheer black tights.

To close out 2012, Kim Kardashian partied in Vegas in a fishnet dress with glittery appliqués. While the look was more conservative in length, the couture element and shimmer made it perfect for New Year's Eve.

Sofia Vergara always knows how to bring the va-va-voom. She closed out 2014 with Joe Manganiello that Dec. 31 in a long red bandage dress with a matching red lip.

Nick Jonas, clad in a sparkly suit, gave wife Priyanka Chopra, who wore a bright pink dress with structured shoulders, a New Year's kiss when they rang in 2020 together at the Fontainebleau Hotel in Miami Beach.

Ellie Goulding said so long to 2019 while wearing an emerald green velvet minidress with subtle silver trim and metallic sandals. 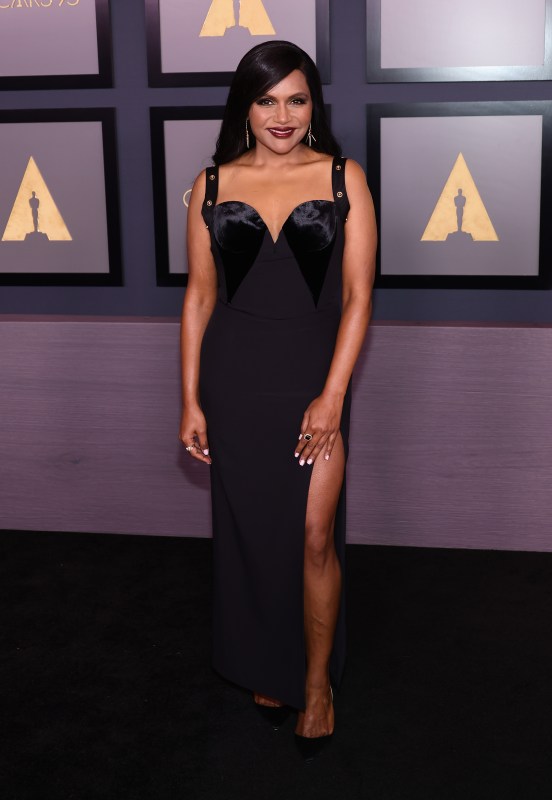