Believe it or not, Harrison Ford's legendary first Indiana Jones action flick, Steven Spielberg's "Raiders of the Lost Ark," hit theaters 40 years ago. In celebration of the movie's big anniversary on June 12, 2021, let's take a look back at Harrison's life and career in photos. Keep reading for more…

RELATED: Leading men of yesteryear when they were young

In 1964, Harrison Ford became a contract player, which nabbed him bit parts in movies (along with $150 a week). His first role was playing an uncredited bellhop in 1966's "Dead Heat on a Merry-Go-Round" (pictured). Things were slow, so he worked as a carpenter on the side to support his family. Things started to pick up for Harrison in the 1970s when he reportedly did some carpentry work for George Lucas, who gave him a supporting role in "American Graffiti" (pictured). In the 1973 flick, the actor played Bob Falfa, good-looking and egotistical drag racer. "American Graffiti" went on to earn more than $200 million at the box office on a $770K budget, making it one of the most profitable films of all time.

Harrison Ford scored his first (and, to date, only) Oscar nomination for his performance in 1985's "Witness." The actor played a detective charged with protecting an Amish boy who witnesses a murder in Philadelphia. Although he lost to William Hurt, the movie took home Academy Awards for best original screenplay and best film editing. And really, we all won when we got to see Harrison in his movie wardrobe.

Harrison Ford delivered a Golden Globe-nominated performance opposite Tommy Lee Jones in 1993's "The Fugitive." He played Dr. Richard Kimble, a man who escapes from custody after being wrongfully convicted of murdering his wife and then seeks to catch the real killer, all while being chased by U.S. Marshals.

Not many people can say that they're right with the Dalai Lama, but Harrison Ford can! In September 1995, the actor testified before the U.S. Senate Foreign Relations Committee in support of the Dalai Lama and an independent Tibet, an act that reportedly got him banned from China. Later, in 2007, Harrison narrated the documentary "Dalai Lama Renaissance." Harrison is seen here with His Holiness Tenzin Gyatso, the Fourteenth Dalai Lama of Tibet, and second wife Melissa Mathison at a Beverly Hills dinner in the Dalai Lama's honor in 1996.

Up, up and away! Harrison Ford took to the friendly skies in the mid-'90s when he earned his pilot's license. In 1998, he played a pilot in "Six Days, Seven Nights" (pictured), shooting some of the flying sequences himself. However, the following year, Harrison flipped and crashed his helicopter near Santa Clarita, California. Fortunately, he didn't sustain any major injuries in the accident.

Harrison Ford and Melissa Mathison divorced in 2001. As part of the divorce settlement, the actor (seen here with the screenwriter in 1998 shortly before they split) had to fork over a reported $118 million to his ex, making it one of the most expensive divorces in Hollywood history. Melissa died of neuroendocrine cancer in 2015.

Harrison Ford doesn't just pick up statuettes at award shows — he picks up ladies too! He met "Ally McBeal" actress Calista Flockhart, who's 22 years his junior, at the Golden Globe Awards in January 2002. They couple (seen here in July 2002) tied the knot in 2010 in New Mexico, where Harrison was filming "Cowboys and Aliens." Together, they raised her son Liam, whom Calista adopted before meeting Harrison.

Harrison Ford was given the prestigious Cecil B. DeMille Award by the Hollywood Foreign Press Association in 2002. The A-list actor is pictured here with his trophy (and presenter Ben Affleck) at the Golden Globe Awards that year.

In 2010, Harrison Ford — seen here at the Tokyo premiere of "Indiana Jones and the Kingdom of the Crystal Skull" in 2008 — told late night host David Letterman how he got his trademark chin scar. "It was a car crash. I was on my way to work [at a department store in the '60s] and [I had] one of those first cars with a seatbelt and I hadn't put it on… and I went around to fumble with it [to secure it] and of course I hit a telephone pole," he said, explaining that even though he went to a hospital for treatment, the laceration ended up scarring anyway.

Harrison Ford is one proud papa! He's pictured here with one of his kids, chef and restaurateur Ben Ford, at the Los Angeles Mission's Christmas Eve for the homeless event in 2012.

Harrison Ford is seen here with another one of his children, Georgia Ford, at the premiere of "Paranoia" in Los Angeles in 2013. The father-daughter duo were joined by Harrison's third wife, Calista Flockhart.

It was a rocky road back to the Rebel Alliance for Harrison Ford. In June 2014, the actor, seen here with co-star Carrie Fisher, broke his leg while shooting "Star Wars: The Force Awakens" when he was crushed by a hydraulic door on the set of the Millennium Falcon while filming in Britain. But you can't keep him down! He made a full recovery and returned to filming by the end of the summer. "The Force Awakens" — which was released in December 2015 — went on to gross more than $2 billion worldwide.

In March 2015, Harrison Ford survived another horrible aircraft accident when his vintage two-seat airplane malfunctioned and crash-landed on a golf course near Los Angeles. He spent nearly a month in the hospital after the accident dislocated his right ankle, shattered his pelvis, broke his back and left him with a serious bump on the head with major lacerations. Seven months later, he was joking about it to late night host Jimmy Kimmel, saying, "This was not a movie." Harrison — seen here several months after the crash at the "Star Wars: The Force Awakens" premiere in December 2015– is even back to flying, a move that his wife, Calista Flockhart, supports. Be careful, buddy!

Harrison Ford sported an unexpected look — long white hair and a beard — at the June 2019 premiere of Universal Pictures' animated film "The Secret Life of Pets 2," in which he voiced Rooster the dog. The shaggy grooming wasn't a personal choice — the actor was shooting the 2020 adventure film "The Call of the Wild," in which he played an experienced frontiersman who befriends a dog named Buck in the Yukon.

Harrison Ford is rocking his fedora once again. The actor — who's clearly still in action-adventure film shape — is seen here at 78 strolling around Newcastle Upon Tyne, England, in June 2021 during a break from filming the fifth installment in the Indiana Jones action franchise, which is due in theaters in July 2022. 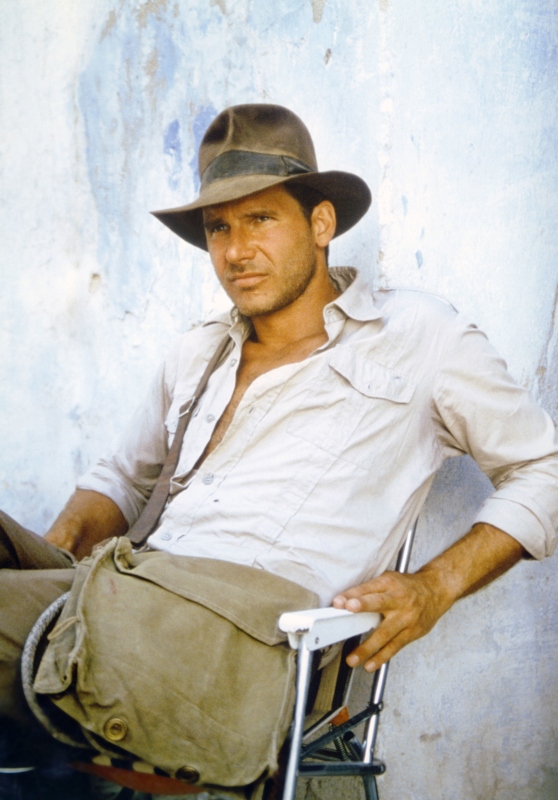 A Sport Illustrated model puts her abs on display, plus more great celebrity photos this week