It's the most wonderful time of the year! The Victoria's Secret Fashion Show is upon us, and 10 newly minted Angels will be gracing the runway. From a former professional basketball player and a teen mom to a member of Taylor Swift's squad and a ballroom dancer, the newest crop of Angels are fabulous and fascinating. Get to know the models who will be joining veteran Angels Alessandra Ambrosio, Adriana Lima, Lily Aldridge and the rest of the catwalk queens when the show premieres on CBS on Dec. 8, 2015. Keep reading to get acquainted with the new kids on the catwalk!

All-American Angel Taylor Hill hails from Colorado. She honed her skills on couture catwalks before earning her wings. Discovered on a dude ranch, Taylor made her Victoria's Secret runway debut at the brand's 2014 fashion show, walking during the VS Pink portion. The 19-year-old brunet beauty has also appeared in shows for more than 38 major designers including Chanel, Versace, Armani and Alexander Wang, and has amassed 1.7 million Instagram followers. Aside from modeling, Taylor is about to venture into acting. She snagged a role in 2016's "The Neon Demon" alongside Keanu Reeves and Elle Fanning.

Meet Sara Sampaio! Her face may look familiar since the 24-year-old Portugese stunner is no stranger to the modeling world. Sara has posed for the pages of Vogue, GQ and Elle and won the title of Sports Illustrated Swimsuit Issue's Rookie of the Year in 2014. But Victoria's Secret proved more elusive to the 5-foot-9-inch brunette, and she was turned down by the brand two years in a row. Refusing to give up, the third time truly was the charm for Sara, who worked hard and landed a spot on the runway at the show in 2013.

When she came in for castings, Victoria's Secret casting agents dubbed Dutch beauty Romee Strijd a "perpetual smiler." Romee's cheery demeanor landed her the gig walking at the 2014 Victoria's Secret Fashion Show and helped her earn her wings as an official Angel the following year. The 20-year-old was discovered while shopping with her mom in Amsterdam and originally turned down the offer. Fortunately for the fashion world, Romee eventually changed her mind and the rest is history!

Elsa Hosk charted a very different path to receive her Victoria's Secret Angel wings. The Swedish stunner is a former professional basketball player! Elsa played in a Swedish professional league for two years before modeling offers stated to roll in for the 5-foot-9-and-a-half-inch bombshell, and she moved to New York City to pursue the drastically different career. After booking campaigns with Guess, Elsa also caught the eye of Victoria's Secret and has walked the brand's fashion show runway every year since 2011. But 2015 is a whole different ballgame for the former pro athlete, because it will be the 27-year-old's first time strutting her stuff as an official Angel!

Jasmine Tookes hails from Huntington Beach, California, where she grew up doing gymnastics and playing softball before she was discovered. The 24-year-old booked her first Victoria's Secret Fashion Show in 2012 after bouncing back from not being cast in 2011. Aside from being one of the 10 new Angels, Jasmine is also the face of the brand's Scandalous fragrance.

Stella Maxwell was traveling the world well before she started modeling. Born in Belgium to Northern Irish parents, the British model grew up in Australia and New Zealand before being discovered while out with friends. The 24-year-old scored the ultimate runway gig when she booked her first Victoria's Secret show in 2014 and was crowned an Angel in 2015. Stella also made headlines in the summer of 2015 for her rumored romance with Miley Cyrus.

You may recognize North Carolina native Martha Hunt as a member of Taylor Swift's friend squad since she starred as "Homeslice" in Taylor's music video for "Bad Blood." But 26-year-old Martha has been a working model since 2007 and has walked in more than 180 fashion shows during her career. Having been a part of the Victoria's Secret gang since 2013, Martha's promotion to official Angel was only natural for the 5-foot-10-inch American beauty.

Jac Jagaciak started her career at an open casting call in her native Poland at age 13 and landed a campaign for Hermes later that year. Now 21, Jac — whose real name is Monika — has booked runway work as well as ad campaigns with fashion's elite designers and made her Victoria's Secret Fashion Show debut in 2013. The least glamorous part of the gig according to Jac? Having to wear nude underwear!

From teen mom to Victoria's Secret Angel! Lais Ribeiro stands the tallest of the newest crop of VS Angels at 6-foot-1 and is also the only mother among the pack. After giving birth at 18, a friend convinced Lais to try her hand at modeling. The Brazilian beauty credits fellow Brazilian models Alessandra Ambrosio and Adriana Lima as her inspirations for moving to New York City in 2009 and giving modeling a shot. The now-25-year-old has been working with Victoria's Secret since 2010 and made her runway debut in 2013 before finally being named an official Angel.

There's a former reality show contestant among the newly minted angels too! Kate Grigorieva came in as the runner-up on "Russia's Next Top Model" in 2012, which drew the attention of modeling agencies. By 2014, Kate was walking for all of the major high-fashion labels including Givenchy, Gucci, Celine and Balmain. At the end of 2014, the former ballroom dancer walked her first Victoria's Secret Fashion Show runway. 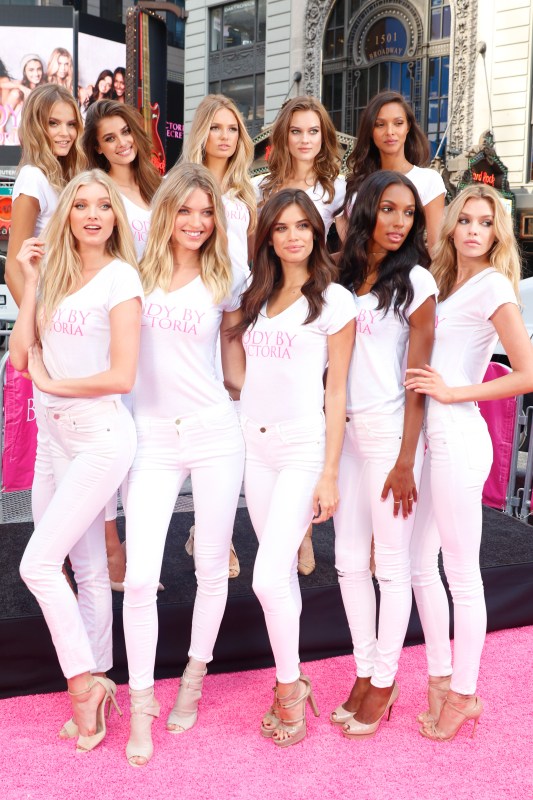 Up Next New Angels