The truth about the working relationship between Charlize Theron and Tom Hardy, who starred together in 2015's "Mad Max: Fury Road," is finally coming out. They "hated" each other. In the 2022 oral history book "Blood, Sweat & Chrome: The Wild and True Story of Mad Max: Fury Road" by Kyle Buchanan, the cast and crew of the film detailed why Charlize did not like Tom. One editor said, in an excerpt reported by Vanity Fair, that it was "clear that those two people hated each other. They didn't want to touch each other, they didn't want to look at each other, they wouldn't face each other if the camera wasn't actively rolling." The book detailed an instance in which Tom showed up to set three hours late, prompting Charlize to go on a rant. "'How disrespectful you are!'" a camera operator recounted her shouting. "She was right. Full rant. She screams it out. … He charged up to her and went, 'What did you say to me?' He was quite aggressive. She really felt threatened, and that was the turning point." Tom's admitted he was at fault, telling the author, as reported by the Independent, "In hindsight, I was in over my head in many ways. The pressure on both of us was overwhelming at times. What she needed was a better, perhaps more experienced partner in me. I'd like to think that now that I'm older and uglier, I could rise to that occasion." Charlize has also owned up to her part too. "It was like two parents in the front of the car. We were either fighting or we were icing each other — I don't know which one is worse — and they had to deal with it in the back. It was horrible! We should not have done that; we should have been better. I can own up to that."

Kanye West is trying to throw another wrench into his divorce. The rapper, via his lawyer, is claiming that the reality TV star can't prove that he wrote harassing social media posts, therefore they shouldn't be used as evidence in their increasingly messy divorce. "Kim claims she read something online allegedly by Kanye and characterizes the posts in her declaration as misinformation … Kim needed to offer the social media posts into evidence, and show that the posts were written by Kanye," court documents, obtained by TMZ on Feb. 26, said. Less than two weeks ago, Ye publicly said he took "accountability" for "harassing" Kim and her boyfriend, Pete Davidson. For what it's worth, Kanye's team never actually says he didn't write the posts, but they say Kim can't prove he did. Ye has long fought against the divorce and has tried to throw up multiple roadblocks along the way, but Kim has made it clear that she wants out. Ye's lawyer is also trying to challenge Kimye's prenuptial agreement. Both of Kanye's fights are uphill battles, as they are fairly routine court procedures. Whether Kanye likes it or not, a judge could declare Kim legally single next week.

So Sam Hunt's pregnant wife is filing for divorce after all. On Nov. 18, Hannah Lee Fowler filed divorce documents, citing adultery as the reason for ending her marriage of nearly five years. In her docs — in which she revealed she's expecting a baby in May — she asked for alimony, primary custody of their soon-to-be-born child and child support. However, just a few hours later, Hannah inexplicably withdrew her divorce filing. But on Feb. 23 it was reported that the divorce was back on. TMZ explained that Hannah only withdrew the paperwork because her attorneys realized they'd filed in the wrong county. She has since refiled the case in the appropriate county in the Nashville area.

Russia's invasion of Ukraine dominated the news as the week came to a close. On Feb. 24, Russia's President Vladimir Putin announced the launch of a "major military operation" in Ukraine. Many in Hollywood — like the rest of the world — watched in horror, and some reacted with disbelief on social media. "Dancing With the Stars" alum Maksim Chmerkovskiy was in Kyiv, Ukraine, as the invasion began and recorded several tearful Instagram videos before retreating to a bomb shelter. A few hours later, it was reported that Sean Penn was also in Kyiv filming a documentary about the invasion. The Weeknd, though, was apparently one of the few not watching the events unfold, which led to a major faux pas. At the precise moment Russian missiles were being launched, the music star tweeted, "LET'S GOOOOOOOO." He was trying to hype up his latest project, which was set to be released on Feb. 24. The "Blinding Lights" singer's feed was bombarded with fan messages telling him to delete the tweet — worse, some fans assumed he was cheering on Russian military forces and siding with the Kremlin. Finally, two hours after that tweet was posted, the singer said he didn't know what was going on in Europe. "Unfortunately I'm just now seeing what's happening with the conflict and will pause on tomorrow's announcement," he tweeted. "I pray for everyone's safety."

To no one's surprise, "The Wendy Williams Show" is no more. The time slot will now go to Sherri Shepherd, who will host a show called "Sherri." Due to ongoing health issues, Wendy has been MIA from her eponymous daytime talk show since July 2021. "It's been a challenging time for Wendy as she deals with her health issues. She is incredibly grateful to [syndication company] Debmar-Mercury, to Sherri and everybody else who has supported the show through this time," Wendy's rep said on Feb. 22. "She, more than anyone, understands the reality of syndicated television — you can't go to the marketplace and sell a show that's the 'Maybe Wendy Show.' She understands why this decision was made from a business point of view, and she has been assured by Debmar-Mercury that should her health get to a point where she can host again and should her desire be that she hosts again that she would be back on TV at that time."

Aaron Rodgers and Shailene Woodley are sparking reunion speculation. Following reports that the duo split and called off their engagement, Aaron took to Instagram on Feb. 21 to share a lengthy list of things he's grateful for. Tops on that list was the "Big Little Lies" actress. "@shailenewoodley, thanks for letting me chase after you the first couple months after we met, and finally letting me catch up to you and be a part of your life," he wrote. "Thanks for always having my back, for the incredible kindness you show me and everyone you meet, and for showing me what unconditional love looks like, I love you and am grateful for you." On Feb. 22, he gushed about her on "The Pat McAfee Show." E! News later reported that on the same day, Aaron and Shailene were spotted together at Erewhon Market in Los Angeles. "They came to the cafe for breakfast and just sat outside at a table together," a source told the outlet.

Jennifer Lawrence is the newest mother in Hollywood. Public records obtained by TMZ on Feb. 23 showed that Oscar winner and husband Cooke Maroney, an art gallery director, recently welcomed their first child. The webloid further reported that the actress had a baby shower at the end of January.

"ER" and "Top Gun" star Anthony Edwards was keeping a big secret! In an interview with Esquire that debuted on Feb. 11 and made headlines this week, the actor revealed that he and "St. Elmo's Fire" actress Mare Winningham quietly eloped last year. Who knew! "We're too old to throw weddings," he said before gushing of Mare, "She's just spectacular. She's an amazing singer and she's a wonderful actress and she's an incredible person." The duo, who co-starred in 1996's "Miracle Mile" and were both previously married to other people, reportedly took their long-term friendship to the next level in 2020 after both moved to New York City.

Back on! Ben Stiller and Christine Taylor separated in 2017 after more than two decades together. But in recent years, there's been speculation the two reconciled. "We were separated and got back together and we're happy about that," Ben confirmed in an interview with Esquire that came out on Feb. 22. The "Dodgeball" actor said the couple reconnected during the coronavirus pandemic as they quarantined together with their children. "Then, over the course of time, it evolved," he said. "It's been really wonderful for all of us. Unexpected, and one of the things that came out of the pandemic." Ben said he and Christine learned to accept their differences. "I think we have a respect for the ways that we're similar and the ways we're different. And I think accepting that, you can really appreciate someone more because you're not trying to get them to change for you," he said. "Once you accept that, you save a lot of energy. 'This is something that works for me; this is something that doesn't work for me.' If you have that trust level with your partner, you know that me saying 'I don't like doing that thing' is not me saying 'I don't like you.'"

Legendary Las Vegas entertainer Donny Davis — a star at Beacher's Madhouse for two decades who's also performed with celebrities including Britney Spears, Miley Cyrus, Mariah Carey, Seth MacFarlane, Joe Jonas and more — died on Feb. 22. TMZ reported that foul play is suspected. A police report obtained by TMZ reveals that Donny, another man and several women spent time at a bar at Las Vegas's Resorts World just hours before his death. The diminutive Donny was quite intoxicated, the report alleged. After a few hours at the bar and at a nearby hotel, Donny and the man went to the star's room at Resorts World for about an hour, at which point the man left and returned with one of the women who, as TMZ writes, "noticed Donny sitting in a chair and his hands looked pale and pink and began turning purple. The woman said Donny's hands were 'freezing' and he was not breathing." Hotel security was called, as was 911. Police suspect foul play, TMZ explained, because of the number of people in the room and police allegations they were being uncooperative.

Sally Kellerman — who was nominated for an Oscar for her performance as Margaret "Hot Lips" Houlihan in the 1970 "M*A*S*H" movie — died on Feb. 24 in Woodland Hills, California, her publicist, Alan Eichler, confirmed to Variety. She was 84. Sally also notably appeared in other Robert Altman films as well as in the big screen adaptation of Neil Simon's comedy "Last of the Red Hot Lovers," in Rodney Dangerfield's "Back to School" and more. 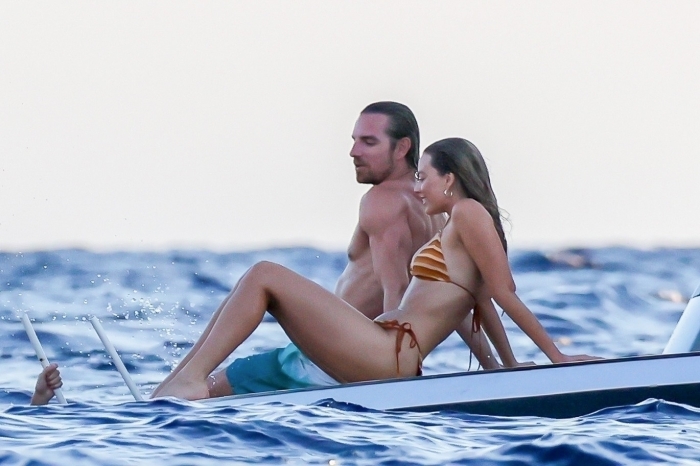