Scarlett Johansson is not pressuring Colin Jost to get married, despite a new tabloid report. Gossip Cop can exclusively correct this claim. We're told it's "not true." 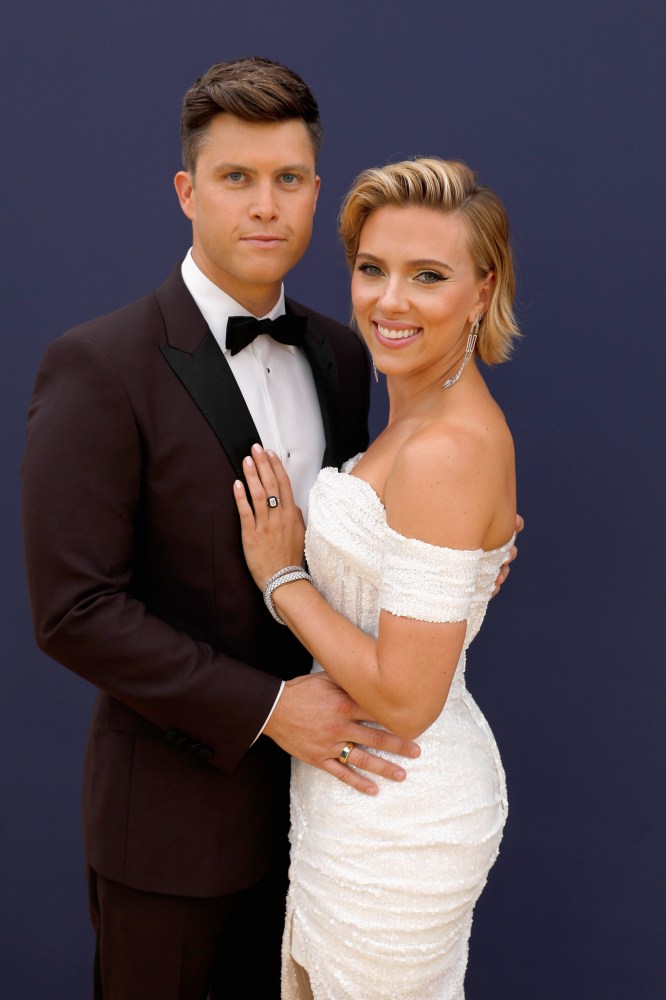 According to the new issue of In Touch, Johansson is strongly pushing the "Saturday Night Live" head writer and "Weekend Update" co-anchor to wed. It seems the story was made up because of how the couple dressed two weeks ago at the 70th annual Emmy Awards, which Jost co-hosted (see above). The tabloid begins its latest manufactured tale, "With her long white gown and his formal tux, lovebirds Scarlett Johansson and Colin Jost looked like a bride and groom as they walked the red carpet."

To then lend credence to its concocted premise, the gossip magazine has a so-called "insider" quoted as saying, "She wants to lock Colin down as soon as possible." But to cover itself when they don't get engaged anytime soon, the same unnamed and seemingly fabricated tipster asserts, "He's in love with Scarlett, but she's not the easiest person to be with." "She's really needy and demanding, and when she's in a relationship, she wants to be completely worshipped," adds the untraceable "source."

The alleged insider continues on about how it's Johansson's supposed "diva ways" that's stopping Jost from proposing. "Her behavior is bound to wear thin. So when it comes to Colin taking the plunge, I wouldn't hold my breath," contends the anonymous snitch.

Of course, if The Avengers star were really "needy," "demanding," and "not the easiest person to be with," the jovial Jost wouldn't be dating Johansson in the first place. As noted above, it appears the tabloid's article was simply made up after the actress was pictured dressed in white at the Emmys. And while she and Jost may wed one day, in the past Johansson has been vocal about the difficulties of marriage and monogamy.

In the March/April 2017 issues of Playboy, for example, the actress said that while she thinks "the idea of marriage is very romantic," she further expressed, "I don't think it's natural to be a monogamous person." Johansson also communicated how marriage is "a lot of work" and that relationships become "different" right after one weds. Based on her own remarks, it seems highly unlikely that Johansson is pressuring Jost to quickly get engaged and tie the knot, especially after her first two marriages to Ryan Reynolds and Roman Dauriac ended in divorce.

Meanwhile, a mutual friend of ours and Jost tells Gossip Cop the magazine's premise is "not true." We've also reached to his and Johansson's reps for comments. Jost and Johansson began dating in May 2017.

Prince William, Kate Middleton Being Crowned Next King And Queen?