Bob Dylan is one of the most influential artists in the history of music. His career has spanned five decades and he's regarded as one of the best songwriters of all time (some argue that he is the best). In 2016, he was awarded the Nobel Prize for Literature — making him the first musician to ever receive that honor. Former President Barack Obama said of the legend, "There is not a bigger giant in the history of American music." It goes without saying that many would want to tie themselves to such a man… and many have. Current artists, both young and old, have covered Dylan over the years. To mark his 76th birthday on May 24, 2017, Wonderwall.com is taking a look at just a few of the modern-day performers who continue to tip their caps to Dylan by covering his songs.

RELATED: Celebs who are still as good as it gets

This is one of the rare cases where the remake of the song is probably more well-known than the original. Bob Dylan released "Make You Feel My Love" on his 1997 album "Time Out of Mind." Dylan's version didn't really move the needle, but other versions did. Garth Brooks recorded it in 1998 for the film "Hope Floats" and it hit No. 1 on the country charts. Dylan was actually nominated for a Grammy for Best Country Song. Then, in 2008, Adele covered the track and put it on her "19" album. It hit No. 26 on the charts but became a cult favorite for her fans.

Like many artists, Miley Cyrus has covered Bob Dylan multiple times. In 2016 while appearing on "The Tonight Show," she chose to eschew singing one of her own songs and instead performed "Baby, I'm in the Mood for You." She also released her version of "You're Gonna Make Me Lonesome When You Go" in 2012, a song about lost love that Dylan recorded in 1975 — 17 years before Miley was even born. Miley has since made it a staple in her live shows.

RELATED: Why we love Miley

Stevie Wonder thought Bob Dylan's "Blowin' in the Wind" was quite good, so he put it on his "Up-Tight" album in 1966. Dylan had originally performed it for his "The Freewheelin' Bob Dylan" album three years prior. Stevie's version became a Top 10 hit on the Billboard chart. In 2004, the song was ranked No. 14 on Rolling Stone magazine's list of the "500 Greatest Songs of All Time." Dolly Parton also recorded it for her 2005 covers album, "Those Were the Days."

In 2009, Beck released a cover of Bob Dylan's "Leopard-Skin Pill-Box Hat" for the charity album "War Child Presents Heroes." He also performed the song during the 81st Academy Awards. Dylan was probably all too happy to hear Beck perform a song he initially recorded in 1966. While promoting his "Modern Times" album in 2006, Dylan told Rolling Stone, "If I've got any kind of attitude about me or about what I do, what I perform, what I sing, on any level, my attitude is, compare it to somebody else! Don't compare it to me. Are you going to compare Neil Young to Neil Young? Compare it to somebody else, compare it to Beck — which I like — or whoever else is on his level."

Kesha's love of Bob Dylan is quite well-known… or at least it should be. At the 2016 Billboard Music Awards, she performed "It Ain't Me Babe" to sterling reviews. Just a few days later, she performed his 1967 song "I Shall Be Released" at a Nashville event appropriately called Dylan Fest. She's been known to sing "Don't Think Twice, It's All Right" in concert too. On Instagram in 2016, she called Dylan "one of my favorite songwriters of all time" and "an artist I have always looked up to."

It doesn't happen often, but every now and again, John Mayer starts strumming the chords to Bob Dylan's 1975 song "Buckets of Rain." This usually happens at private events. The track is actually a fairly obscure one from Dylan's critically acclaimed "Blood On The Tracks" album. The song has also been covered by Coldplay in concert and David Gray.

Bob Dylan wrote the chorus to "Wagon Wheel" in 1973. In 2013, country artist Darius Rucker made it his own. He put the song on his "True Believers" album. The track went No. 1 on the country charts and Darius ended up winning a Grammy for Best Solo Country Performance. This is again a case where the cover version was more popular than the original. Fun fact: Dylan only penned the chorus — the most important part — but the whole song as people know it today was actually first performed by Old Crow Medicine Show after the band's Ketch Secor added lyrics — and scored a co-writing credit with Dylan's blessing — in the early 2000s.

Wanna meet a big Bob Dylan fan? Say hello to Marcus Mumford of Mumford & Sons. In 2014, Marcus joined supergroup The New Basement Tapes, a band that also included Elvis Costello, among others. The supergroup released an entire album of tracks based off of Bob's handwritten lyrics. The album was called "Lost on the River." Dylan wrote the lyrics in 1967 in his basement as he recovered from a motorcycle accident — some of them were never released. The group recorded 40 songs, but put 20 on the album.

Bob Dylan seemed to be smitten with Alicia Keys and actually name-checked her several times in his 2006 song "Thunder on the Mountain." The songstress had no idea until John Mayer told her. "He texted me saying, 'You're never gonna believe this… Bob Dylan wrote a song about you.' It's a mind-blower and an honor. And then another part of me is wondering what he was thinking," Alicia told Mojo magazine. Dylan told Rolling Stone around the same time, "There's nothing about that girl I don't like." Alicia paid him back in 2013 by covering his 1980s hymn "Pressing On" in the 2013 documentary "Muscle Shoals."

In 1965, Cher released her "All I Really Want To Do" album. It contains not one, not two, but three Bob Dylan covers: "All I Really Want To Do," "Don't Think Twice" and "Blowin' in the Wind." She has gone on to cover six other songs of his either in concert or on albums. There's actually a photograph of Cher and Dylan playing together in New York City — no one seems to know when the clash of legends happened, but everyone agrees that it was between 1969 and 1976. Considering how many Dylan songs she knows, this had to have been a thrill for Cher.

A lot of younger folks might think that "Knockin' on Heaven's Door" is a Guns N' Roses song. Wrong. Bob Dylan wrote and performed that song in 1973 for the soundtrack of the film "Pat Garrett and Billy the Kid." G N' R has been playing that song since 1987 and finally recorded it for their "Use Your Illusion" album in 1991. Avril Lavigne has also covered the song. So have Eric Clapton and Wyclef Jean, among others.

A U2 fan site claims the band has covered 14 different Bob Dylan songs in concert, so you can count the Irish rockers as huge fans. When U2 released "Rattle and Hum" in 1989, it featured not only a cover of Dylan's "All Along The Watchtower," but a song called "Love Rescue Me" that Dylan and U2 frontman Bono actually wrote together. Dylan and Bono have known each other for years. In 1984, the legend was in Ireland on tour and invited Bono on stage to sing "Blowin' in the Wind." It didn't go well. As Rolling Stone put it, "The U2 frontman didn't know any of the words to Dylan's protest classic… so he simply made up new ones on the spot."

Rod Stewart is only a couple years younger than Bob Dylan, but he certainly counts the singer-songwriter as an influence. Rod has covered many, many Dylan songs and even put "Tomorrow is a Long Time," which Dylan wrote in 1963, on his "Every Picture Tells A Story" album in 1971. (Some guy named Elvis Presley also covered "Tomorrow is a Long Time.") There was actually a small debate in the late '80s as to whether Rod's "Forever Young" was a rip-off of Dylan's song of the same name. Rod said it was about his kids, but he understood why people would think that because they are awfully similar. To this day, Dylan is listed as a writer on Rod's "Forever Young" track and the Brit has agreed to share the royalties from the song with Dylan.

The Red Hot Chili Peppers were still trying to climb their way to stardom in 1987 when they recorded Bob Dylan's 1965 hit "Subterranean Homesick Blues" and put it on their "The Uplift Mofo Party Plan" album. You'd be hard-pressed to find the Chili Peppers singing it now, but Dylan is still a part of the group's early legacy.

Eddie Vedder might have a man-crush on Bob Dylan. Eddie is constantly covering Dylan when he performs solo. Eddie will often belt out "The Times They Are A-Changin'" or "Girl From The North County" or "I Shall Be Released" or any other song by Dylan that he feels like performing. Rolling Stone reported that Eddie's band, Pearl Jam, played Dylan's "Masters of War" 15 times between 2003 and 2008. In 1992, Eddie and Mike McCready of Pearl Jam were the two youngest acts to perform at Dylan's 30th Anniversary Concert Celebration. Their rendition of "Masters of War" was arguably the highlight of the evening. 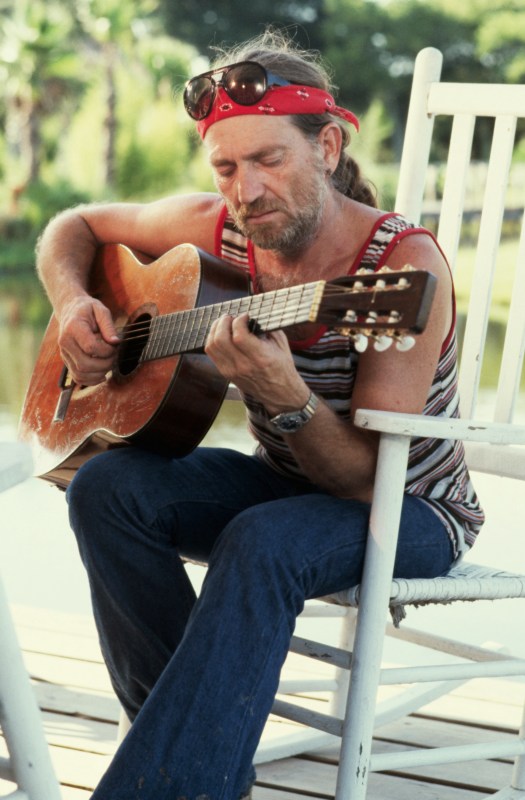