By Corey Podell and Saryn Chorney

Are you ready for Judgment Day? Christian Bale got a little help from his co-stars, friends and a robot foe at the "Terminator Salvation" premiere in Los Angeles on Thursday. When we asked Bale who would win in a showdown, Batman or John Connor, Bale wisely answered, "John Connor has guns!"

Check out these red-carpet photos and more words of wisdom from the postapocalyptic cast and crew.

Bryce Dallas Howard takes on the role of Kate Connor, wife of John Connor, in "Terminator Salvation." It was no surprise that she defended her main man against another upcoming summer blockbuster:

"John Connor is gritty and intense. He has to triumph over a sea of Terminators. They're scarier (than Transformers) because there is sincere intellect … you can't discern whether you're facing a human being or a stealthy machine."

"You heard the content, but not the context. That was a scene when the character was meant to be losing his mind. Everyone on set understood that moment and he apologized profusely."

Anton Yelchin stars in two huge summer movies, "Star Trek" and "Terminator Salvation," but did you know he also does a killer Arnold Schwarzenegger (the original Terminator) impression?

"I booked my first commercial by doing an Arnold impression when I was 8," Yelchin told us. "Of course, the only thing I said was, 'I'll be back!' And they were like, 'Amazing! This is the greatest little kid we've ever seen!"

McG is one of Hollywood's top directors. Besides helming "Terminator Salvation," you may remember two little movies he made called "Charlie's Angels" and "Charlie's Angels: Full Throttle." So we asked him the question everyone had on their minds last night: Who has the more unstoppable body, the Terminator or Demi Moore?

"I'm going to have to go with Demi Moore on that one," confessed McG. "She's unbelievable. The Red Bulls get it done. She's a tough, tough cookie. Hello Demi!"

Sam Worthington (with Natalie Mark) plays a Terminator who is half-man, half-machine in "Terminator Salvation." He doesn't do an Arnold Schwarzenegger impersonation, but ask him about his Bale impression…

"I had way more (meltdowns) than him, they just didn't catch me!"

Rose McGowan is a woman of action, and although she's not in the "Terminator Salvation" movie, she does lend her voice to the video game version. But guess what she really nerds out for?

"'The Price Is Right' on Wii. It's the worst graphics ever, but I love it."

"Well, like once a year I freak out on David. And maybe at the dinner table with the kids," she admits. "I freak out about bad table manners."

Check out an exclusive clip from "Terminator Salvation"

Olympian Shawn Johnson of "Dancing With the Stars" also made an appearance at the "Terminator Salvation" premiere. She too confessed to a Bale-esque meltdown:

"I freaked out yesterday on my partner at rehearsal!"

Moon Bloodgood plays a pilot named Blair Williams in "Terminator Salvation." Her character has a "close relationship" with Marcus Wright, the half-human/half-machine Terminator. Could he have shredded the bottom of her dress with his robotic hands, too?

Eric Mabius turned up at the "Terminator Salvation" premiere, as well. He once played a cop from the future in "Resident Evil" and starred in "The Crow: Salvation," so we wonder if he was feeling some sci-fi film envy — not that the set of "Ugly Betty" isn't just as gritty.

We weren't surprised to see Kelly Osbourne at the "Terminator Salvation" premiere. The reality star/singer/frequent rehab guest will soon be hawking a self-help book aimed at teenage girls. Rule No. 1? Don't do anything she did.

Last but not least, the original Terminator's kids (Katherine, Patrick and Christopher Schwarzenegger) were sent by their parents to the "Terminator Salvation" premiere. Word on the street is that Arnold was too scared of Bale to attend himself. Hasta la vista, Governator.

Is Schwarzenegger back in "Terminator"? 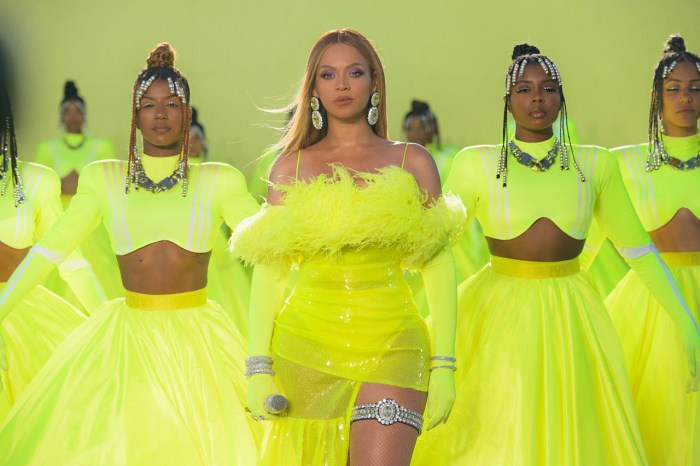