On June 7, 2021, model-actress-designer Emily Ratajkowski turns 30! In honor of the beauty's birthday, Wonderwall.com is revisiting some of her best and worst looks… starting with this absolute stunner. In 2017, Emily showed up at the Christian Dior Spring/Summer 2018 show during Paris Fashion Week in a dress that surprisingly wasn't by that designer. While guests sitting in the front row typically wear a look from the presenting designer's collection, Emily went against the grain — instead, she wore this very romantic white gown from Brock Collection. The midi-length dress, which featured a corset bodice with an asymmetrical closure, a flattering sweetheart neckline and sultry thigh-high slit, was a major bridal moment. She completed the ethereal look with a pair of black heels by Altuzarra.

Keep reading for more of EmRata's fashion hits and misses…

Unfortunately, not every look worn by Emily Ratajkowski has been a hit. Take, for example, this rather… peculiar-looking gown she wore during the Cannes Film Festival screening of "Loveless" in 2017. While the ruffled dress by Norwegian designer Peter Dundas definitely brought all the drama, we didn't exactly love the triangular chest cut-out or the mixture of fabrics.

Leave it to Emily Ratajkowski to look like an absolute vision at a social event. When she attended Marc Jacobs and Charly Defrancesco's wedding reception in New York City in 2019, the model opted for this dazzling yellow dress featuring a plunging neckline (that went down to her waist!) from Marc's eponymous label. She looked glamorous form head to toe — her copper-toned eyeshadow, high bun and strappy sandals perfectly complemented the frock. We also can't get over the makeshift collar around her neck!

Emily Ratajkowski looked beautiful at the 2019 Vanity Fair Oscar Party… but this wasn't one of our favorite looks on her. The statement elements champagne-colored gown by Brock Collection would have been fine on their own but combined, the corset bodice, peplum waist and sheer lace trumpet skirt were just too busy for us.

This one is to die for. Emily Ratajkowski doesn't need to be at a major event to turn heads! The model showed off some stunning street style while out and about in New York City in July 2019 in a cream bralette, camel-colored blazer by The Row, black high-waisted leggings by Khaite, black peep-toe pumps and a coordinated black crocodile-textured handbag. Her rectangular tortoise-shell sunnies and low bun were the perfect finishing touches to this effortlessly cool getup.

Yeah, we could've done without this look. In November 2018, Emily Ratajkowski attended the GQ Australia Men of the Year Awards in a Paco Rabanne ensemble that clashed in every way. The partially buttoned turtleneck top that featured a busy checkered pattern and the multi-print skirt were complete misses in our book.

We've said it before and we'll say it again — Emily Ratajkowski delivers some of her best looks when she's off duty! She looked incredible in these black separates by Nasty Gal while out and about in New York City in October 2020. We also couldn't help but adore her red hair.

Sweet and sultry! We cannot get enough of the minidress Emily Ratajkowski wore to the Versace Fall/Winter 2020 show during Milan Fashion Week. She turned heads in the fiery red jacket-style design with a V-cut neckline from the Versace Pre-Fall Collection.

Hmm… it's a no from us! In May 2018, Emily Ratajkowski attended the Los Angeles premiere of "In Darkness" in this vibrant ensemble by Jacquemus. From the fitted polka dot top to the draped yellow skirt, she looked better suited for a beach bash instead of a red carpet event.

At the 2019 Met Gala, which featured a "Camp: Notes on Fashion" theme, Emily Ratajkowski looked like an absolute dream. She arrived on the steps of New York City's Metropolitan Museum of Art in this sheer custom gown by Peter Dundas. From the open back and full bodice cut-out to the halter neck, Emily's hand-beaded dress was one of the most daring looks that year. Another component of the ensemble we couldn't get enough of? Her sparkling Swarovski crystal- and feather-embellished headpiece that took almost 21 days to craft!

While Emily Ratajkowski might have been breaking out of her comfort zone (which we appreciate), there's not much to love about this getup. The model attended the 2019 CFDA Fashion Awards at New York City's Brooklyn Museum in this look featuring busy red ruffles on top and a burgundy trouser-skirt combo on the bottom, all from the Hellessy Spring 2019 Collection. As for accessories? She completed the peculiar ensemble with an Ascot bag by The Row and gold heels by Tabitha Simmons.

OK, this is a look we can totally get behind! In August 2015, Emily Ratajkowski attended the "We Are Your Friends" premiere afterparty in New York City wearing this metallic khaki green cut-out jumpsuit by Solace London. She looked chic yet entirely laid back in the ensemble, which she completed with neutral sandals.

Aside from its stunning marigold hue, this gown did not impress us. In 2017, Emily Ratajkowski arrived at the InStyle and Warner Bros. Golden Globes afterparty in this silky plunging gown by Reem Acra featuring a precarious thigh-high slit and an unflattering embellished collar. That night, she suffered a wardrobe malfunction thanks to the dramatic slit — though thankfully, she played it off like a total champ!

We adore the simplicity of this look Emily Ratajkowski wore to the InStyle and Warner Bros. Golden Globes afterparty in 2018. Her velvet slip dress by Alex Perry was incredibly elegant — and we appreciate how her bold red eye makeup brought some drama.

In November 2018, Emily Ratajkowski attended TheWrap's Power Women Summit, but she failed to impress in this look from Oscar de la Renta's Spring 2019 Collection. We love the concept of a scarf as a skirt, but in terms of execution? Alas, it fell short.

As for one of her more forgettable looks? In November 2017, Emily Ratajkowski attended the Goldie's Love in for Kids event in this ruched minidress by Alessandra Rich that looked pretty dated. She completed the unimpressive number with something we did like: bright green peep-toe heels by Christian Louboutin.

Now this is what we're talkin' about! In February 2021, Emily Ratajkowski stepped out in New York City's Tribeca neighborhood wearing a chic street style look that adorably showcased her baby bump (she gave birth to her first child, Sylvester, the following month). She wore a black sweatsuit, an oversized blazer and Yeezy desert boots. Fun fact: The Elara hoodie is actually merch from husband Sebastian Bear-McClard's production company, which is behind films like "Uncut Gems" and "Good Time."

Look, they can't all be winners. In 2014, Emily Ratajkowski dropped by New York City's SiriusXM Studios in a look — a gray David Koma long-sleeved dress with midriff cut-outs and a leather skater — that doesn't seem to capture the "it" girl vibe she has today. The frock just seemed drab and ill-fitting in comparison to her other standout ensembles. 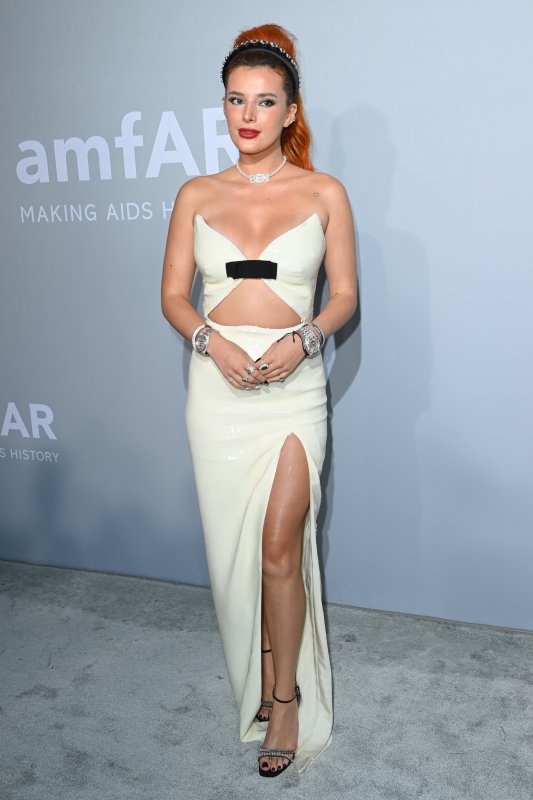 Up Next Cannes hits & misses

These are the stand-up comedy specials you shouldn't miss

Check out the cutest photos of the royal Cambridge kids