Zoe Kravitz has always marched to the beat of her own fashion drum. In honor of the actress's 33rd birthday on Dec. 1, 2021, Wonderwall.com is taking a look back at her wildest fashion moments, starting with her 2019 Vanity Fair Oscar Party look. While other actresses hit the exclusive Hollywood event wearing glamour gowns, Zoe opted for a sexy gold chainmail bikini top paired with a straight black skirt.

Keep reading for more of her creative, statement-making style…

For the 2019 Met Gala, Zoe wore a Saint Laurent creation — an elegant black sequined number with a skin-baring cut-out bodice that made her look like a wicked queen of hearts. She accessorized the edgy-meets-couture gown with dangling statement pearl earrings and layered silver bracelets, creating an overall breathtaking look.

Zoe Kravitz, a Met Gala regular, wore a see-through dress by Yves Saint Laurent for the 2021 benefit that left little to the imagination (and likely provided no comfort or warmth either!). A risky move, but Zoe obviously looked like a million dollars.

Zoe Kravitz supported one of her favorite brands, Saint Laurent, at the luxury fashion house's February 2018 fashion show. Never one to pass on a belly-baring top, Zoe attended wearing a lacy long-sleeved cropped blouse with a deep V-neck and heavy embellishments on the shoulders.

In 2016, Zoe Kravitz attended a Coach event in another see-through ensemble! The actress wore a sheer dress with black undergarments on the bottom and what looked like rocker-chic iron-ons over her chest.

For the "Allegiant" premiere in 2016, Zoe Kravitz wore a beachy black outfit with a netted cover-up-style dress over black short shorts and a tube top. The dress's frayed hem and tasseled neckline provided an edgy touch that went perfectly with her super-elongated ballerina bun.

Zoe Kravitz's 2018 Met Gala look played peekaboo with her body. The dress was super-conservative on one side, covering up everything. On the opposite side, it was tied together in two spots, showing off all of her leg, hip and chest.

The gown dress that Zoe Kravitz wore to the 2018 premiere of her film "Fantastic Beasts: The Crimes of Grindelwald" was mostly shocking for how non-Zoe-like it was! The lover of black and edginess opted for a princess-y pink dress with a tutu-like feature on her hips. She topped it off with emerald earrings, which were playful and fun against the clashing hue. It was an all-around great look, just out of character for her!

Zoe Kravitz had a uniquely Zoe princess moment in Dior Haute Couture at the 2017 Emmys. "This particular dress felt quite magical — fairy-like — so I thought go for it," she told red carpet journalists, as reported by Vogue, of the feathered rainbow-ombre dress.

At the 2013 premiere of "The Hunger Games: Catching Fire," Zoe Kravitz proved she could make anything work on the red carpet when she arrived in a stiff black dress that seemed like fashion's interpretation of a sack of potatoes.

For the "Mad Max: Fury Road" premiere in 2015, Zoe Kravitz mixed all her favorite elements in this work of art by Valentino. Lenny Kravitz and Lisa Bonet's daughter opted for a black-and-gold sheer gown that perfectly married grunge, rock and glam and then, to make it more her, rocked a gold lip.

Zoe Kravitz's 2017 Met Gala look was another sartorial choice that felt out of character, and ergo, a bit wild. Zoe certainly turned heads in this black and millennial pink creation by Oscar de la Renta, which also featured a dramatic train.

Zoe Kravitz went goth for a 2015 Fendi event in a short brown dress with multiple cut-outs all topped with a multi-colored striped fur coat that featured both natural and wildly unnatural colors like bright pink and blue.

Zoe Kravitz rocked a strapless bodycon Valentino cocktail dress at the 2016 Met Gala. To up the couture element of her ensemble, she added a lace mask, wings and funky black heels.

The balloon organza Saint Laurent dress that Zoe Kravitz wore to the Vanity Fair Oscar Party in 2018 gave her some natural social distance thanks to its super-wide skirt. Zoe let the volume and feathered trim be the showstopper by keeping her accessories to a minimum, but still perfectly brightened up the look with bold red lip.

Zoe Kravitz combined her dress and jewelry at the 2017 amfAR New York Gala. Her white-hot gown featured a halter-style diamond necklace and patches of sparkling silver fabric on the bodice. She upped the glitz factor with matching earrings and heeled sandals.

Zoe Kravitz made a splash at the 2015 Vanity Fair Oscars Party in a neutral netted midi-length dress from Balenciaga paired with a matching clutch and gold lace-up wedges.

For the Vogue 95th Anniversary Party in Paris in 2015, Zoe Kravitz went with one of her favorite wild looks: a sheer dress atop oversized undergarments. She bizarrely accessorized the delicate dress with a heavy black leather bag and grandma-style slippered heels.

Back in 2011, Zoe Kravitz's style was still evolving. The feathery, long skirt she wore to the UNICEF Snowflake Ball felt just right for her, but the conservative white blouse with puffed shoulders she wore on top looked wildly out of place on her.

Zoe Kravitz would not recognize her style from 2010. Before she discovered netting, chainmail and sheer dresses, she hit the red carpet at a screening of "Twelve" in this thin, fraying pink-and-purple vintage-inspired dress that lacked shape and fell below her knees. 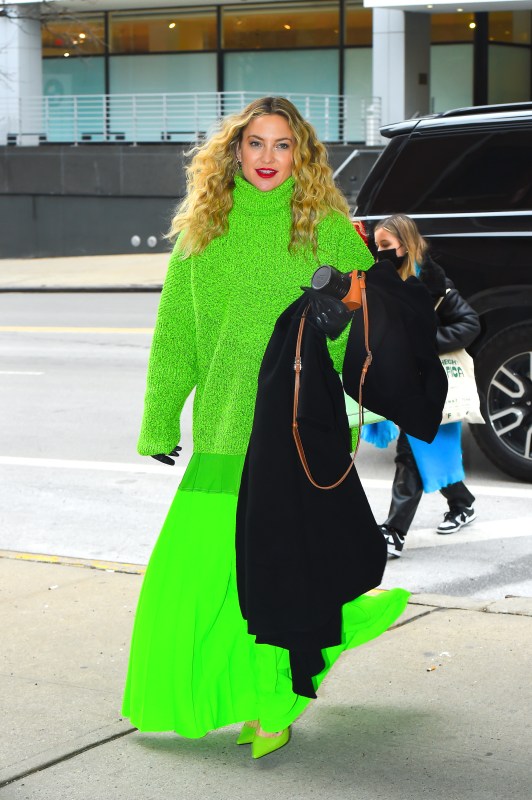 More Wonderwall
Love it or hate it?