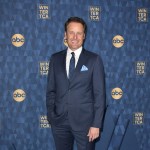 Chris Harrison is returning to the airwaves via podcast more than a year after a racism controversy sparked his exit from the "Bachelor" franchise. And the first item of business for Chris' new show appears to be a frank discussion of his departure from Bachelor Nation. "I have not spoken publicly for two years about this, and I have a lot of thoughts. I think about this every day," Chris says in a teaser clip for "The Most Dramatic Podcast Ever" released Monday (Dec. 19). "Truly every day of my life I think about this and what I want to say and how important it is that I speak to everyone for the first time. So, it's heavy. It's really heavy." The former ABC host seems to be referencing the controversy that ensued after he defended "The Bachelor" alum Rachael Kirkconnell's past racist behavior in an interview with Rachel Lindsay, the first Black star of "The Bachelorette." He later apologized and took a hiatus from the shows before exiting for good after 19 years. "We'll see how it goes," Chris says in the clip. "We may scrap this whole thing to be honest, I don't know … I think it'll be cathartic. I'm looking forward to getting this off my shoulders and repairing this, moving forward, letting everybody hear from me." According to a press release, Chris will executive produce the new podcast with his fiancée Lauren Zima for iHeartPodcasts. The weekly show is slated to cover "all things relationships," with Chris leaning on his Bachelor Nation experience as a reference point for issues around dating, love and beyond. "The Most Dramatic Podcast Ever," premieres Jan. 9.

After a week of promoting his new film "Babylon" alongside co-star Margot Robbie, Brad Pitt rang in his 59th birthday on Sunday (Dec. 18) with his rumored girlfriend, Ines de Ramon. According to People, Brad and Ines, 32, were spotted exiting a car together in Hollywood, marking their latest outing in the wake of reports they've been seeing each other for a few months. Ines also joined Brad last week at the afterparty for his "Babylon" premiere, where both he and Margot defended the onscreen kiss Margot's been criticized for having improvised because, as she put it to E! News, "when else am I gonna get the chance to kiss Brad Pitt?" Speaking to Entertainment Tonight at the premiere, Margot said everyone in the cast "established our boundaries before making this movie, because it's a movie that really pushes boundaries." Brad, meanwhile, brushed off the negative response to his co-star's kiss comments, telling ET he was the one who figured, "When else am I going to get a chance?" when Margot wanted to add the smooch. He added that "there's always room for character interpretation," joking that the kiss is "the tamest thing she does in" the movie. "She's on fire on this," Brad gushed. "It's the best I've ever seen her."

Britney Spears' father, Jamie Spears, is reportedly planning to help his daughter's ex-husband, Kevin Federline, write a book about his "experience of fatherhood amid … turmoil." That's according to the Daily Mail, which published an extensive interview with Jamie on Sunday (Dec. 18), in which Jamie defended the conservatorship he put his daughter under for more than a decade, saying it may have saved her life. Jamie — who Britney has accused of using the conservatorship to exploit, control and abuse her — told the Mail he believes the legal tactic also benefitted the two, now-teenaged sons Britney shares with Kevin. "Where would Britney be right now without that conservatorship? … I don't know if she'd be alive. I don't …," Jamie, 70, told the outlet. "For protecting her, and also protecting [her sons], conservatorship was a great tool." Now 41, Britney was placed under the conservatorship in 2008 after her behavior sparked two involuntary 5150 holds in a psychiatric ward. The conservatorship continued until November 2021. For most of that time, Jamie managed his daughter's finances, career and personal life in exchange for at least $16,000 a month, according to the Mail. He was removed from his role as conservator last year, two months before the mandate was terminated. "My understanding of a conservatorship is to help someone regain their life and return back to society, and to be able to live normally. I want to say that I made a difference," Jamie told the Mail. He also claimed Britney was "broke" when the conservatorship began, and took credit for improving his daughter's financial outlook. Britney's lawyer has repeatedly accused Jamie of mishandling Britney's estate to his own advantage. Jamie's reference to helping Britney's ex, Kevin, with a book about fatherhood comes just three years after Kevin was granted a restraining order against Jamie for allegedly getting into a physical altercation with Britney and Kevin's then 13-year-old son, Sean. No criminal charges were filed. As of Monday, Kevin had not commented on his reported book project.

On Monday (Dec. 19), Amber Heard announced she's settling the defamation case brought against her by her ex-husband, Johnny Depp, after she appealed a verdict that landed decisively in Johnny's favor earlier this year. "It's important for me to say that I never chose this," Amber wrote, in part, on Instagram. "I defended my truth and in doing so my life as I knew it was destroyed." Johnny originally sued Amber over her 2018 op-ed for the Washington Post in which she discussed having been the victim of domestic abuse. She never named Johnny in the piece. On Instagram, Amber said her decision to settle was not "an act of concession." Rather, she feels the courts failed to protect her, alleging that "abundant, direct evidence that corroborated [her] testimony was excluded" and that "popularity and power mattered more than reason and due process." (The jury awarded Johnny $15 million in damages, though that figure was later reduced; in the cross-complaint, Amber was awarded only $2 million, which Johnny is appealing.) Amber continued: "I make this decision having lost faith in the American legal system, where my unprotected testimony served as entertainment and social media fodder," and referenced the verdict of a libel case Johnny brought against British tabloid The Sun, which dubbed him a "wife beater." In that case, where Amber noted she wasn't forced to testify before "the world's media,": a British court found Johnny had, in fact, abused Amber. By contrast, Amber said the U.S. trial subjected her to "a type of humiliation" she "simply cannot re-live," adding that she also can't "risk an impossible bill – one that is not just financial, but also psychological, physical and emotional." Amber concluded: "Women shouldn't have to face abuse or bankruptcy for speaking her truth, but unfortunately it is not uncommon. I will not be threatened, disheartened or dissuaded by what happened from speaking the truth. No one can and no one will take that from me. My voice forever remains the most valuable asset I have."

Christmas came early this year for a group of New Orleans teens, thanks to Lil Wayne. Over the weekend, the rapper hosted a holiday bash for 150 kids aged 12 to 1, in honor of their strong academic performance and involvement in sports programs in 2022. Dubbed "A Weezy Christmas," the party took place at Dave & Buster's in Weezy's hometown of New Orleans, where kids played games, got their photos taken with Santa and went home with brand new athletic gear, courtesy of a partnership with Wilson Sporting Goods, according to People. "This Christmas @mackmaine4president & I wanted to give some future hall of famers the gift of game w/ the help of @Wilson 🤙🏾," Wayne wrote on Instagram on Sunday (Dec. 18), alongside photos from the event. "Making sure they received the necessary resources so they could enjoy all the benefits of being a top tier athlete was very important to us! #HappyHolidays#WeezyChristmas," he added. The rapper reportedly worked with local youth groups including the Youth Empowerment Project and Son of a Saint to identify young guests for the bash.

Gwen Stefani reveals she 'barely' made it through high school

At 53, Gwen Stefani says she finally feels ready to launch her own business, decades after struggling in school and succeeding because of luck. "I've gotten to dabble in so many different things, whether it be songwriting or designing fashion with L.A.M.B. and then Harajuku," the singer and star of "The Voice" says in a new interview with WSJ Magazine pegged to her new makeup line, GXVE Beauty. "This is different because it's starting a business — those were licenses," Gwen explains. "I'm just not a business person. I grew up barely making it through high school. Everything I've done has been so much luck. With this, I feel almost like I'm smart enough to be able to do this now." As she carves out a new career path with the makeup line, Gwen's also mulling the possibility of reunion tour with the band that launched her music stardom. "Anything can happen. I have no idea what's going to happen with No Doubt," Gwen said. "We haven't really talked about doing anything, but it feels like everyone is, right? All the '90s people—Blink-182 did an eight-month tour that sold out in like five minutes."

Twitter has spoken and it wants Elon Musk to step down. On Monday (Dec. 19), the billionaire's latest informal Twitter poll showed more than 57 percent of users think he should vacate his role as CEO of the platform. Twitter has been plagued with ad partner losses since Elon brought the company for $44 billion and began firing mass contingents of employees, scrapping familiar policies and stirring controversy by blocking the accounts of some high-profile journalists after reinstating users who'd been banned for hate speech, among other things. "As the saying goes, be careful what you wish, as you might get it," Elon tweeted at one point on Sunday before the results were in. He also weighed in on some banter about who might replace him. "The question is not finding a CEO, the question is finding a CEO who can keep Twitter alive," he posted on Sunday, later adding, "No one wants the job who can actually keep Twitter alive. There is no successor." As Monday came to a close, multiple outlets pointed to the poll's results in reporting Tesla's new, 52-week low, with many noting that what the billionaire does next is anyone's guess.