The words "celebrity" and "wedding" together usually signal lavish displays of conspicuous consumption, with a star-studded cast of guests and paparazzi hiding in the floral arrangements. But sometimes, for all sorts of reasons, celebs decide to get married on the sly. Here are our top choices for vows of secrecy:

The Bride Wore Bling: Their guests were invited to an afternoon party on June 5, 2004, one week after Marc Anthony's divorce was finalized from his first wife, Dayanara Torres. Fewer than 50 guests attended the private ceremony, but someone tipped off the media, and helicopters reportedly circled over the backyard. While the high-profile couple have largely been successful in keeping private the details of their ceremony and reception, it hasn't always been easy: In 2006, two men were arrested on suspicion of trying to sell a copy of the wedding video, stored on Anthony's stolen laptop.

The Scarlett Wedder: Nice fake-out! A mere month after Johansson publicly stated, "It's a good time, and we're just enjoying our time to be young and engaged," the couple tied the knot. On Sept. 27, 2008, outside Vancouver, Canada, Johansson and Reynolds were wed in a private ceremony attended by some 40 family and friends. They began dating in 2007.

A Wedding in Paris: It was Valentine's Day 2009 in Paris when Salma Hayek married François-Henri Pinault, the father of her daughter, Valentina Paloma, before a dozen guests. The brides bouquet was a mix of red and white roses. The couple followed up with a celebrity-studded second wedding in Venice, Italy, on April 25, 2009. Guests for that shindig included Bono, Ed Norton, Penelope Cruz, Javier Bardem, and Lily Cole.

Careyed Away: What a whirlwind! Carey and Cannon dated for one month and were engaged for another month, and by month three, they had married in a sunset ceremony on Carey's private estate in the Caribbean. The secluded wedding on April 30, 2008, was Carey's second; she was previously hitched to music mogul Tommy Mottola.

They Renéeged: The only thing more of a surprise than their secret wedding was the fact that they were married at all! Few knew that Zellweger and Chesney were even dating, much less the marrying-each-other sort. The couple met working a tsunami relief benefit in January, and on May 9, 2005, they tied the knot on a private beach in the Virgin Islands. The bride wore a Carolina Herrera gown, and the groom had on his trademark Stetson. The knot, sadly, was not tied tightly enough: They had their marriage annulled a mere seven months later.

The In-Law Jesse James: It was on July 15, 2005, when guests attending a party at a private ranch in Santa Barbara discovered they were actually attending the wedding of Bullock and James, who had been dating for a year. The bride and groom arrived in a giant red monster truck, and the theme of the reception was "hoedown." The wedding had a number of personal touches: An aria performed by Bullock's late mother, opera singer Helga Bullock, was played as Bullock walked down the aisle, and the wedding cake was made by chef Gesine Prado, Bullock's sister. Bullock even learned metal work in order to craft James' wedding band herself.

Marriage a la Moder: Roberts and Moder threw a July Fourth party in 2002, with a surprise for guests: a wedding. Invitations to the barbecue simply read "Come Celebrate Independence Day With Us." They probably welcomed the privacy; their relationship was tabloid fodder from the moment they started dating on the set of "The Mexican," where they met. Roberts was previously engaged to Kiefer Sutherland and Dylan McDermott, and was married to Lyle Lovett from 1993 to 1995. Moder had been married from 1997 to 2002, when he and Roberts met.

A Federline Offense: Britney wore a white strapless gown with a long veil and a tiara. Her one-time backup dancer, Kevin, wore a custom-made, traditional tuxedo. What wasn't traditional? After the ceremony, the wedding party changed into special velour sweat suits: Bridesmaids wore pink suits with "Maids" and "Hot Mama" on the back, while the fellas wore white with "Pimps" and "Pimp Daddy" on theirs. Britney's sweat suit read "Mrs. Federline," and Kevin's read "Hers." Also less than traditional: Guests were asked to sign confidentiality agreements, promising not to sneak photos of the wedding. And then there's the date: the ceremony was performed on Sept. 18, 2004, but the license was not filed until Oct. 6, 2004.

Cash Registers: Cash Warren and Jessica Alba wanted a private wedding — really private. So they didn't invite any guests to their ceremony on May 19, 2008. It was a Beverly Hills courthouse affair: The bride wore a simple blue dress, and the groom wore slacks. Alba gave birth to their daughter less than four weeks later.

De-fflecking Attention: The couple held a small and very private wedding June 29, 2005, at the Parrot Cay Resort on the Caribbean islands of Turks and Caicos. Garner's "Alias" co-star Victor Garber officiated on the beach. Garner, four months pregnant, wore a white empire-waist gown. Affleck wore a Hugo Boss suit in cream, and it was simply the three of them — quite a shift from the 400-plus guest extravaganza that was to be Affleck's 2003 wedding to Jennifer Lopez, which ended up being called off.

Shielded From the Press: Shields and Henchy married on April 4, 2001, in a private civil ceremony on California's Catalina Island. Friends and family were invited to a dinner party, but upon arrival, they were hustled onto a boat ride to Catalina, some 25 miles away. Shields appeared in a Vera Wang gown, and vows were exchanged. One month later, the couple married again, in a Catholic ceremony with guests, in the home of Broadway producer Terry Allen Kramer.

Single No Moore: Moore and Adams married in Savannah, Ga., on March 10, 2009, a quiet Tuesday. Moore wore a tea-length dress and sandals; Adams donned a sport coat and sneakers. The couple had a short church ceremony with no guests, after booking the church just the day before. They exchanged simple silver rings. Moore said of Adams, "He's a good egg. I'm in awe of him: his brain, his passion. He's truly one of a kind." 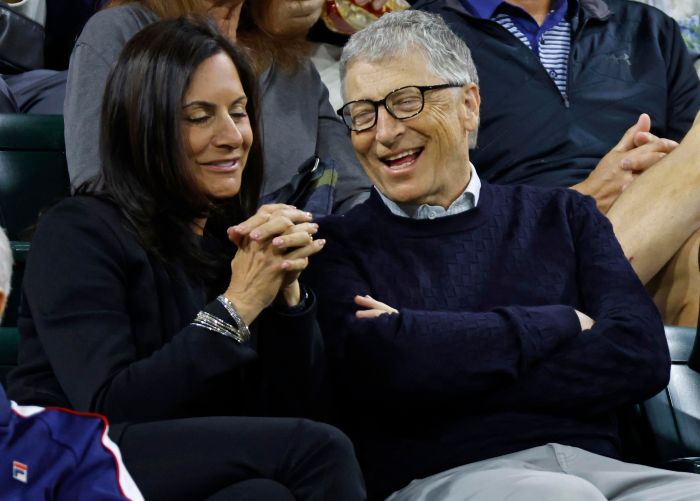