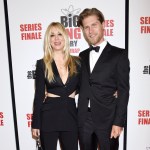 The name is Kaley Cuoco. That's it. Just days after the "Big Bang Theory" actress announced she and Karl Cook had separated, she's changed her Instagram bio to reflect the split. As recent as last week, Kaley's Instagram bio read "Mrs. @mrtancook." Over the weekend, she erased that title. It now reads, "Yes Norman," her production company. Her feed still includes pictures with her ex, so she clearly isn't wiping her Instagram clean of her past love.

The death of prolific actor Michael K. Williams has triggered a criminal investigation. As Michael is believed to have died from a drug overdose, police are now trying to locate the person who allegedly gave the actor drugs. TMZ reported on Sept. 7 that authorities are "conducting an investigation into the origin of the narcotics cops found at the site of the actor's death." The substances, TMZ said, are "believed to be heroin-based." Michael's body was found at his New York home on Sept. 6. After "The Wire" star's death, fans began pouring over his Instagram, and his last post was somewhat cryptic. On Aug. 31, Michael posted a video of Tracy Morgan urging friends and fans "Don't cry for me." Tracy said, "Don't cry for me. Cry for all the others, man." Michael, in his final post, called the comedian a "real OG."

Vicki Gunvalson's son-in-law is ripping the "Real Housewives of Beverly Hills" star for "ruining" the gender reveal of her grandchild. The reality TV star spilled the beans before her daughter Briana Culberson and her husband, Ryan, did. "You ever get really good news and then find out your mother-in-law ruins it? Well, it happened to me today," he said in an Instagram video. "Oh, yeah, we're having a girl." According to reports, Vicki posted a photo of Briana and Ryan shooting pink smoke into the sky. She quickly deleted it, but not before alerting many of her followers. A fuming Ryan also posted an ominous message, which he quickly deleted. "It ain't smart to piss off the one that knows everything — and I know everything," she said.

The writing was on the wall. Nearly a year after they were first linked, Scott Disick and Amelia Gray Hamlin are over, Us Weekly reported on Sept. 7. There are differing claims as to who actually ended things, but most media outlets believe that Amelia, the 20-year-old daughter of Harry Hamlin and Lisa Rinna, ultimately pulled the plug. The split isn't surprising considering many felt that Scott, 38, was still pining for his ex Kourtney Kardashian. On Aug. 31, the Talentless designer privately messaged Kourtney's ex Younes Bendjima about her PDA-centric relationship with Travis Barker. Younes ended up sharing the direct messages with the public, which cast Scott in a bad light and put his romance with Amelia in question. However, a source told Us Weekly the split "wasn't related to the messages Scott sent about Kourtney. This breakup was coming regardless." Interestingly, TMZ says otherwise. "The breakup was coming, but the Younes DM was the final straw," a source told the webloid. Prior to the split confirmation, Amelia stoked the breakup speculation with an Instagram post. "Never settle for less. Not with your jobs, your friends, and especially not with your heart," a post said. "Continue to seek what you are looking for and do not shrink yourself for the sake of other people. You deserve the best."

Brielle Biermann has revealed that she went under the knife recently to correct some mouth issues. The "Don't Be Tardy" star told her Instagram followers that she had "double jaw surgery" to fix jaw joint pain and a significant overbite. She posted several photos to social media in which she's hooked up to multiple tubes in the hospital. "This was NOT for aesthetics but for quality of life," she wrote. "I sucked my thumb til i was 9 ishhh which made the roof of my mouth suuuuuper narrow and my excessive overbite cause my teeth to have no contact whatsoever." Brielle said she's excited to do simple things that she couldn't previously do. "Have you ever thought about what it's like to not be able to bite into pizza? or omg trying to bite into an onion on a burger? impossible for me. i had to use my tongue to help me chew and almost choked every time i ate. that lisp some of y'all complained about? thank the overbite for that as well." Since the surgery, she said she's already able to breath better.

When is a date not really a date? Jay Cutler began raising eyebrows this weekend after reports stated that he took Jana Kramer out to a fancy dinner. People magazine said the former NFL quarterback was actually running a bit of a trick play, and it all had to do with his estranged wife. Jay, it seems, isn't happy with Kristin Cavallari's new romance with country singer Chase Rice. "Jay was trying to make Kristin jealous by going on this public date with Jana," a source told People. "[Jay] has been trying to get Kristin back." Jay was actually determined to make Kristin aware of the date, even giving her a heads up. "She does not care and is not bothered, but she has blocked Jana over it," a source told E! News. "She doesn't have room for this in her life."

After all these years, Monica Lewinsky would welcome an apology from former President Bill Clinton, but even she knows it's not likely. Monica, who serves as executive producer of "Impeachment: American Crime Story," was 22 years old when she had a sexual relationship with the then-President. The scandal was plastered on the front pages of virtually every newspaper and magazine, and it also led to his impeachment. On Sept. 7, the former White House intern spoke to the "Today" show about the hesitation she has about the FX series. "I'm nervous for people to see some of the worst moments of my life and a lot of behavior that I regret. If you remember your 20s not that long ago, it's pretty cringe-worthy," she laughed. The exchange prompted Savannah Guthrie to ask if she wanted an apology from the former POTUS, who was clearly in a position of power when the affair took place. Monica eloquently replied, "I think there was a long period before my life changed in the last six or seven years where I felt a lot in terms of there not being this resolution. I'm very grateful that I don't have that feeling anymore. And I don't need [an apology.] He should wanna apologize, in the same way that I wanna apologize any chance I get to people that I've hurt and my actions have hurt." The ex-President has previously said he felt that his "public" apology was enough.

When it comes to Nicole Scherzinger and Pussycat Dolls founder Robin Antin, the claws are out. Last week Robin filed a lawsuit claiming the "Masked Singer" judge is refusing to take part in a reunion tour unless she gets the lion's share of the group's latest business venture, Pussycat Dolls Worldwide. Robin claims that Nicole agreed to 49 percent of the company in 2019, but is now demanding 75 percent. Nicole also wants "complete creative control" and "final decision-making authority," Robin alleged in legal docs. Nicole's lawyer told People magazine that Robin's claims were "ludicrous and false," and alleged they "are a desperate attempt to divert blame for her own failures by trying to impose obligations on Nicole that simply do not exist." Elsewhere in the lawsuit, Robin states that LiveNation is asking for the $600,000 it invested in the tour be returned. Nicole's lawyer says the singer shouldn't be on the hook for that. "Robin will fail in her efforts to trade on Nicole's hard-earned success to pull herself out of a deep financial hole she has created by her own poor business and professional decisions," the lawyer said. "Prior to Nicole's involvement, trading on Nicole's name without her consent, Robin borrowed (and spent) $600,000 from Live Nation that she won't or can't repay. Nicole has invested her own funds in excess of $150,000 in support of a potential PCD reunion that has now been made impossible by Robin's actions (including the public release of the group members' confidential financial information)."