Steven Tyler is heading back to the small screen! The Aerosmith frontman is the subject of the documentary "Steven Tyler: Out on a Limb," which will be available in VOD and digital HD starting May 15, 2018. In honor of his latest project, Wonderwall.com is taking a look back at the rock star's life in pictures. Keep reading to relive his greatest hits from over the years…

New York native Steven Tyler — who was born Steven Tallarico on March 26, 1948 — landed behind bars for marijuana possession on March 15, 1967. "An undercover nark infiltrated my high school ceramics class, believe it or not. The scumbag sold lids of grass to me and some other kids, then busted us for possession," the rocker told Rolling Stone of how he got expelled from his school in Yonkers.

Before there was Aerosmith, there was Chain Reaction. Steven Tyler posed with his first band in New York City circa 1967. They called it quits after the rocker, who was playing drums at the time, tried to strangle the lead guitarist during a gig in front of a ritzy crowd at a small resort hotel owned by his parents in Sunapee, New Hampshire.

Aerosmith officially formed in 1970. Three years later, the band released their self-titled debut album. Steven Tyler and Joe Perry — who earned the nickname "The Toxic Twins" during the '70s due to their rampant drug use on and off the stage — performed with the group in Newport, Rhode Island, in 1973.

Steven Tyler posed for a portrait in 1976, the same year he appeared solo and sans shirt on the cover of Rolling Stone, sealing his fate as one of the biggest sex symbols of the '70s. Aerosmith released an album every year between 1973 and 1979 except for 1978.

Steven Tyler and model Cyrinda Foxe attended a party for the Broadway musical "Beatlemania" at Jade West Restaurant in New York City on Jan. 18, 1978, the same year they tied the knot and welcomed a daughter, Mia — his second child following the surprise birth of daughter Liv Tyler the previous year. (Steven and Cyrinda called it quits in 1987.)

Steven Tyler showed off his signature sense of style during a performance with Aerosmith in 1986, the same year he went to rehab for the first time after his bandmates staged an intervention.

After some lineup changes, a reunion and rehab, Aerosmith was back with a vengeance in 1990, the year they earned their first Grammy nomination for best hard rock performance for "Love in an Elevator." On Aug. 16, Steven Tyler performed with the band at Stadion Galgenwaard in the Netherlands. (They won their first Grammy the following year.)

Steven Tyler kept close to his second wife, clothing designer Teresa Barrick, during the Third Annual Silver Clef Awards in New York City on Nov. 15, 1990, two years after they tied the knot. The duo had two children: daughter Chelsea in 1989 and son Taj in 1991.

After a memorable 1990 appearance on a Wayne's World sketch starring Mike Myers and Dana Carvey on "Saturday Night Live," Steven Tyler and his Aerosmith bandmates had a cameo in the 1993 comedy "Wayne's World 2."

Steven Tyler stepped out with daughter Liv Tyler, who was 15 at the time, and wife Teresa Barrick at Club USA in New York City on April 28, 1993. (The actress was the product of the rocker's brief fling with model Bebe Buell, who kept her parentage a secret until Liv was around 9 years old.)

Steven Tyler joined daughter Liv Tyler at the premiere of her movie "Armageddon" on June 29, 1998. His band, Aerosmith, recorded the hit power ballad "I Don't Want to Miss a Thing" for the film's soundtrack.

On Feb. 24, 1999, Steven Tyler and his Aerosmith bandmates won their fourth and most recent Grammy — best rock performance by a duo or group with vocal for "Pink" — during the 41st Annual Grammy Awards at the Shrine Auditorium in Los Angeles.

Britney Spears and *NSYNC joined Steven Tyler and his Aerosmith bandmates on stage when they played the Super Bowl halftime show in Tampa, Florida, on Jan. 28, 2001. That same year, the band was inducted into the Rock and Roll Hall of Fame.

Steven Tyler snuggled his son, Taj Tallarico, during the MTV Icon tribute to Aerosmith in Los Angeles on April 14, 2002.

Steven Tyler and wife Teresa Barrick posed with Melania Trump and Donald Trump during the Vanity Fair Oscar Party in Beverly Hills on Feb. 29, 2004. The following year, they called it quits.

Steven Tyler became a grandfather in December 2004 when his eldest daughter, actress Liv Tyler, welcomed her first child, son Milo. The rocker kept a watchful eye on his newborn grandbaby as Liv carried him in New York City on Jan. 29, 2005. Since then, the "Armageddon" actress has added two more little ones to her brood, while another of Steven's three daughters, Mia Tyler, became a mom in May 2017.

Steven Tyler sang "God Bless America" during an MLB playoff game between the St. Louis Cardinals and the New York Mets in St. Louis, Missouri, on Oct. 14, 2006, mere months after he underwent experimental laser throat surgery to treat a popped blood vessel on one of his vocal cords. That same year, the singer admitted that he'd been suffering from hepatitis C for more than a decade.

Steven Tyler and Joe Perry performed as part of Aerosmith at the Verizon Wireless Amphitheatre in Maryland Heights, Missouri, on June 10, 2009. Two months later, the rocker injured his head, neck and shoulder when he took a tumble off the stage during a performance near Sturgis, South Dakota. His injuries were so serious, Steven was actually airlifted to a nearby hospital. Almost all of the band's shows for the remainder of the year were canceled and rumors took off that Steven had parted ways with the group. In December 2009, he returned to rehab for pain management. The following year, he went back to touring with the band that made him a star.

In the summer of 2010, Steven Tyler and Jennifer Lopez signed on to judge the 10th season of "American Idol" with Randy Jackson. The trio posed together at a press conference in Los Angeles on Sept. 22. (He left the show in 2012 after just two seasons.)

On Feb. 26, 2012, two months after he popped the question, Steven Tyler and fiancée Erin Brady attended the Vanity Fair Oscar Party in Los Angeles. They called it quits later that year.

Steven Tyler and his Aerosmith bandmates attended a press junket announcing their new album and tour at the House of Blues in West Hollywood on Sept. 18, 2012. "Music from Another Dimension!," their 15th studio album and first in eight years, debuted on Nov. 6, 2012.

All four of Steven Tyler's kids — daughters Chelsea Tyler, Mia Tyler and Liv Tyler, who was pregnant with her third child at the time, and son Taj Tallarico — joined the rocker at a benefit concert in New York City on May 2, 2016.

Steven Tyler performed with his new backing group, country rockers the Loving Mary Band, on the "Today" show at Rockefeller Plaza in New York City on June 24, 2016, a few weeks before he released his debut solo album, "We're All Somebody from Somewhere."

Steven Tyler and girlfriend Aimee Preston twinned in white dresses during the Celebrity Fight Night Gala in Rome on Sept. 10, 2017. Since they were first linked in early 2016, there have been whispers that the duo are secretly engaged.

Steven Tyler flaunted his physique in an open-front shirt while performing during the New Orleans Jazz & Heritage Festival on May 5, 2018, just a month and a half after his 70th birthday on March 26. 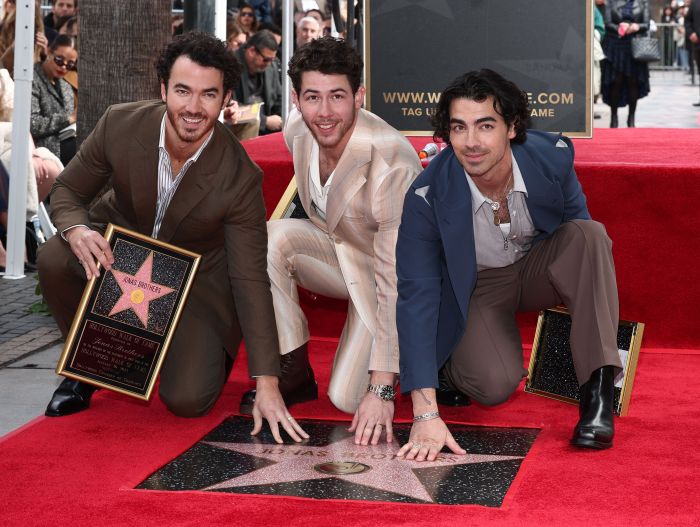 Up Next Star Ceremony Snaps