"Sherlock" will debut it's fourth season finale on Jan. 15, 2017. But before the hotly anticipated show wraps up another run, Wonderwall.com is bringing you some fun facts about the actor behind the titular character — Benedict Cumberbatch. From that time he taught Tibetan monks to his favorite comfort movie to what he's like when he's drunk, here are 10 things you probably don't know — but should — about the British actor.

1. He taught and learned from Tibetan monks

Benedict Cumberbatch spent a year as a teacher in a Tibetan monastery near Darjeeling, India, when he was 19. During the British actor's gap year — a break between high school and college taken by a lot of Brits — he taught English to Tibetan monks. "They were amazingly warm, intelligent, humorous people. Hard to teach English to. I built a blackboard, which no previous teachers seem to have done. With twelve monks in a room, with an age range of about 8 to 40, that's quite important," he told Lion's Roar. "The reward–punishment thing of sweets or no sweets, or game or no game, worked quite well. But they taught me a lot more than I could possibly ever teach them." Like what? "They taught me about the simplicity of human nature, but also the humanity of it, and the ridiculous sense of humor you need to live a full spiritual life," he added.

2. He turns the tables on paparazzi

Benedict Cumberbatch knows how to handle the paparazzi. He once stepped out of his home and held up a sign to them that read, "Go photograph Egypt and show the world something important."

RELATED: "Romeo + Juliet" cast: Where are they now?

3. He dislikes the shape of his head

When talking to The Mirror about the part of his body that he dislikes the most, Benedict Cumberbatch admitted, "the size and shape of my head." He explained, "I've been likened to Sid the sloth from 'Ice Age.'"

4. He went to great lengths for "Star Trek Into Darkness"

Benedict Cumberbatch is a committed actor. For his role as John Harrison/Khan in "Star Trek Into Darkness," he revealed to SFX magazine that he was eating 4,000 calories a day to put on weight. "To go up from a 38 chest to a 42, eating 4,000 calories a day and training two hours a day, as well as the stunt rehearsals and fight choreography, was the most physical demand that's ever been made of me for the screen," he said.

According to Ed Sheeran, Benedict Cumberbatch is "constantly a gentleman" when he's drunk. "He never falters. He's constantly very polite and very nice," Ed told The Independent of his friend after getting drunk with him on espresso martinis.

6. He has an unappealing habit

Believe it or not, Benedict Cumberbatch does have an unappealing habit. "Hoarding. I drag a lot of stuff 'round with me that I don't need," he told The Guardian.

If you're starstruck when you see him, he understands the feeling. During a Reddit Q&A, Benedict Cumberbatch was asked, "Has there been a time when you've been completely starstruck meeting someone famous but had to play it cool because you're famous too?" Benedict responded, "Uhhhhhhhh. Every time I've met someone famous who I've been in the audience of. I have the same butterflies and inability to be cool. I approach them as a fellow member of the human race as the next person in their audience does." He continued, "I've been doing this for 10 odd years, and so to meet people who thrilled me with their work for my entire life in such a concentrated manner as has happened over the last few years has been mind-blowing. One of the many perks of my job, I guess."

8. He has a good answer when you ask him what's sexy

Benedict Cumberbatch was very picky when it came to finding The One. Before he settled down with wife Sophie Hunter, he was once asked what he was looking for in a partner. "A woman who knows that she doesn't have to get all decked out to look good is sexy. A woman who can make you feel smart with her conversation skills is also sexy," he told ELLE Japan. "I believe the sense of humor is important. I also think someone who is good at working with others is sexy." So it's no wonder he ended up marrying theater director and playwright Sophie! They wed on Feb. 14, 2015, and welcomed son Christopher Carlton in June that same year. In October 2016, the happy couple announced that they are expecting another baby.

9. He ain't afraid of no ghost

Who's he gonna call? "Ghostbusters!" During a Reddit Q&A, Benedict Cumberbatch revealed that his favorite comfort movie is the original "Ghostbusters." He also added, "Loads of John Hughes classics. 'Annie Hall.' annnnnd '2001: [A] Space Odyssey!!'"

10. He was immortalized in chocolate — and wax

In 2015, Benedict Cumberbatch was voted "Britain's dishiest TV drama actor" by a UKTV Channel poll of 2,000 British women. As a result, a 6-foot, 88-pound Benedict was made entirely out of Belgian chocolate in order to conduct an experiment. As a promotion for UKTV, they placed the "Chocobatch" at a busy London mall to see how people would react to it. His chocolate statue was unveiled just six months after he was made into a wax figure at Madame Tussauds in London. When his wax figure was being made, he joked, "Finally, I can photobomb myself!" He added, "What a weird and wonderful compliment to be included in the ranks of talent already committed to wax. I've been accused of being wooden in my work, but never waxy!" 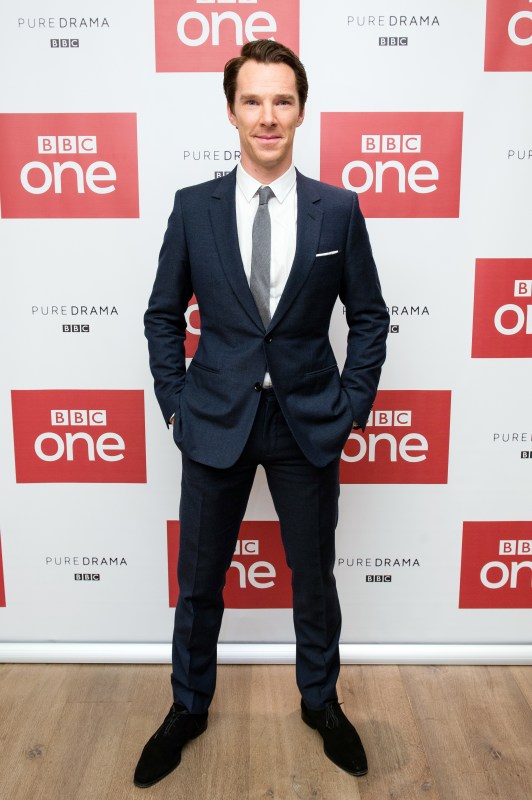 Up Next Cumberbatch facts