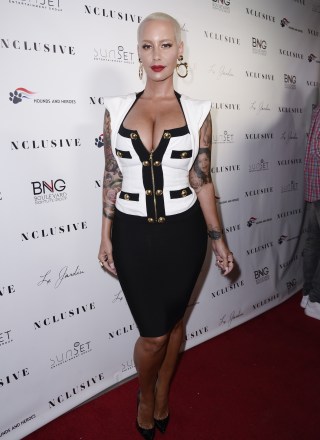 Amber Rose has made her living as a model, reality show regular, spokesperson for Smirnoff's flavors Whipped Cream and Fluffed Marshmallow, professional music video cameo artist, actress (if you use the term loosely) and rapper arm candy. The beautiful Amazonian whose trademarks are her platinum blonde shaved head and stiletto nails has been seen on runways and in ads for numerous brands including Louis Vuitton and Celestino as well as in music videos for Young Jeezy, Ludacris, Nicki Minaj, Fabolous, and Massive Attack. She's dropped knowledge as a guest judge on "Rupaul's Drag Race" and "Master of The Mix" and gone fictional in a handful of low-budget films or direct-to-video projects like "School Dance," "Gang Of Roses 2: Next Generation" and "A Haunting." After a tumultuous relationship with Kanye West from 2008-10, who she claims cheated on her with Kim Kardashian, she started nesting with fellow Pennsylvanian Wiz Khalifa. Her first single "Fame" features the rapper and she returned the favor by appearing in his video for "No Sleep." Their relationship is far more than a professional one though. They had a son, Sebastian, in February 2013 and eloped on the sly the following July. She even has a tattoo of smiling mug on her arm.