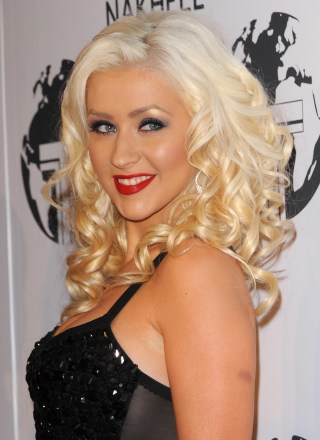 Share Tweet Pin Email
A 10-year-old Christina Aguilera placed only second when she performed "A Sunday Kind Of Love" on Star Search. Thankfully, the pint-sized future pop princess didn't let the loss stop her from pursuing her dream to sing. She warmed up with two years as a Mouseketeer on The New Mickey Mouse Club and on the Japanese pop scene before returning stateside, nailing a chance to sing the theme to Mulan and getting signed to RCA Record in 1998. Her No. 1 self-titled record wooed the world with singles like "Genie In A Bottle" and "What A Girl Wants," secured her a performance at Bill Clinton's White House and a half-time gig at the 2000 Super Bowl, and helped her beat out co-Mouseketeer Britney Spears for Best New Artist at the Grammys. In 2001, she made a bilingual splash — releasing a top-selling Spanish-language album and belting out the sexually suggestive French chorus on the "Lady Marmalade" remake. She continued her provocative streak on Stripped, which contained two more No. 1 hits "Dirrty" and "Beautiful," by posing nude for Rolling Stone and by making out with Madonna at the 2003 MTV VMAs. After getting married to record producer Jordan Bratman in 2005, she exchanged sex kitten style or old Hollywood glam, releasing Back To The Basics, a collection inspired by vintage jazz and blues. She gave birth to son Max in 2008, but separated from Bratman in 2010. After vowing to start fresh in 2011, she botched the National Anthem at the Super Bowl, fell into dating a bad boy, and was arrested for public intoxication. Bringing sexy back opposite Cher in Burlesque, three seasons as a judge on The Voice, and her sympathetic battle with bulge that brought her favorably back into the public eye.