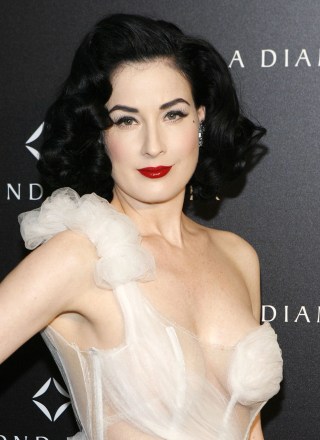 Share Tweet Pin Email
With her raven hair, retro pinup looks and sexy trademark "woman in a giant martini glass" routine, Dita Von Teese is the most famous burlesque artist to hit the world stage since Gypsy Rose Lee. And she is well compensated for it too apparently as she has been quoted claiming she regularly receives $20,000 for 10 minutes work. Her road to shaking her bonbon for a living began with years of ballet classes, working in a lingerie store, allegedly wearing a corset every day for seven years until she cinched her waist down to 16 inches, and college-level study of historic costuming and costume design, which she uses in the creation of her wardrobe and photo shoot design. Although she never followed through on her original aspiration to work on period film wardrobes, she has had a hand (and usually a hip and some cleavage) in various showbiz endeavors including steamy videos with titillating titles like Tickle Party and Bound In Stockings and modeling for Vivienne Westwood and Jean Paul Gaultier. She trained the Charlie's Angels actresses for their Full Throttle dance routine. She's made mainstream appearances on America's Next Top Model, CSI: Crime Scene Investigation (2011's "A Kiss Before Frying" episode), Top Chef Masters and RuPaul's Drag Race. She appeared nude in Playboy in 2002. Her spread was photographed by rocker Marilyn Manson, who she dated, married in 2005 and divorced in 2007. Recent rumors have linked her to newly single Russell Crowe, who has denied they are more than friends on Twitter.