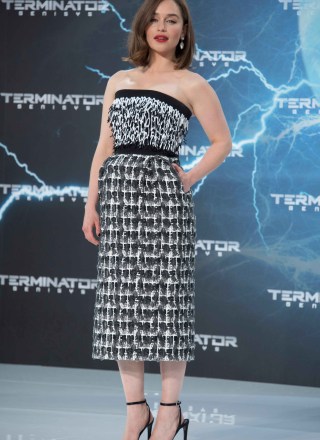 To her friends, she's known as a brunette and Milly. To the rest of the world, this Drama Centre London-schooled beauty is a bleached blond and mother of dragons. Her father was a theater sound engineer and attending a production of "Show Boat" he was working on when she was 3 kickstarted her desire to act. After a guest spot on the U.K. TV series "Doctors" and a TV movie called "Triassic Attack," she skyrocketed to fame in 2011 when she took the role of Daenerys Targaryen on HBO's hit "Game Of Thrones." She expanded her resume in Feb. 2013 by portraying Holly Golightly in a Broadway production of "Breakfast At Tiffany's." She is currently taking on the iconic movie heroine Sarah Connor in the a new Terminator film (2015). While her private life remains mostly a mystery, she was openly linked with "Family Guy" creator Seth MacFarlane from September 2012 to March 2013.