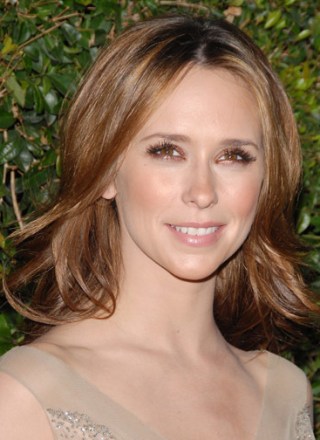 Share Tweet Pin Email
Jennifer Love Hewitt, known by her friends and family by her middle name, transitioned from a peppy child star to doe-eyed teen queen to sexy small-screen staple without ever leaving a gap in her resume. She started taking dance and vocal lessons as a toddler, toured Russia at 9 as part of a dance troupe, and spent a few seasons on "Kids Incorporated." She played Sarah Reeves on the teen hit "Party Of Five," which lead to the opportunity to star in teen-centric films like "Can't Hardly Wait" and "I Know What You Did Last Summer" and a PO5 Reeves-focused spinoff, "Time Of Your Life." After it fizzled, she bounced around doing voice work, TV movies and the occasional mildly successful film like "The Tuxedo" (2002) and two Garfield adaptations (2004, 2006) while concentrating on her music career. When her most popular CD Barenaked peaked at only No. 37 in the U.S  back to TV she went. The "Hot In Cleveland" guest star was "The Ghost Whisperer" from 2005-2010 and her role as a a mom who turns to prostitution to support her family in "The Client List" was expanded from the 2010 TV movie to Lifetime series in 2012. Using her on-screen and real-life romantic experiences (John Mayer, Jaime Kennedy, director John Asher, actor/director Alex Beh, and ex-fiancee Ross McCall), she authored an advice tome in 2010 called The Day I Shot Cupid. She met Brian Hallisay on "List" and, while she was pregnant with their daughter Autumn (b. Nov. 2013), they secretly wed.