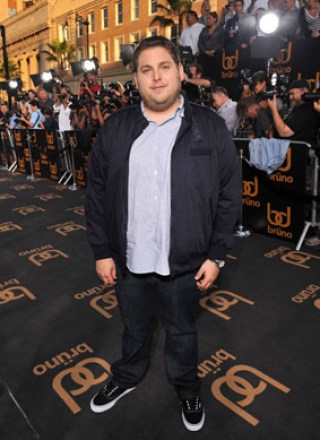 Jonah Hill, the private school-educated son of a tour accountant for Guns N' Roses and a costume designer/stylist, studied drama at New York's New School after high school graduation, intent to write for The Simpsons or Saturday Night Live. Instead he became friendly with Dustin Hoffman's kids while performing his self-penned plays in an East Village Bar which led to the veteran Oscar winner asking him to audition for I Heart Huckabees (2004). He spent the next three years doing bit parts in TV shows (NYPD Blue, Campus Ladies) and movies (Knocked Up, Evan Almighty, Click) before 2007's Superbad made him a household name and a Teen Choice Award nominee. In 2010, he tackled his first dramatic role in Cyrus and stayed serious for Moneyball (2011) and The Wolf Of Wall Street (2013), both of which earned him supporting actor Oscar nods. Hill always returns to his comic roots (This Is The End), often lends his voice to animated projects (How To Train Your Dragon, The Lego Movie, the shortlived, Hill-created FOX cartoon Allen Gregory) and helped reboot cop show 21 Jumpstreet as a big screen franchise as a lead and as a writer. It was that action gig that inspired him to lose 40 pounds in 2011, although he has since regained much of it. Hill, who officiated Adam Levine's 2014 wedding, dated his high school pal Jordan Klein from 2008 to 2011 and is currently linked to actress Isabelle McNally.