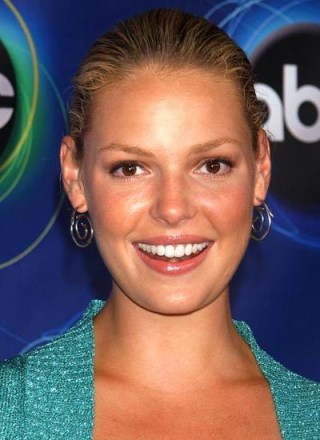 Share Tweet Pin Email
Katherine Heigl's career has been filled with highs and lows. Once quite literally as she starred in the lowest-earning movie in recorded history, the 2006 thriller Zyzzyx Road, which earned $30 at the box office. After working as a Sears and Macy's catalog model as a child and doing some commercial work (Cheerios), she segued into movies as a teen (My Father The Hero, Bride of Chucky) and found cult fame on the high school alien series, Roswell. It still wasn't enough to book roles on Felicity or Alias. However not booking the Jennifer Garner spy show meant she was free to audition for what would become her signature role — Dr. Izzie Stevens on the ABC hit Grey's Anatomy, which she played from 2005 to 2010. Izzie earned Heigl a supporting actress Emmy in 2007, an ad campaign with Nautica and made her bankable enough to lead films like Knomncked Up, 27 Dresses and The Ugly Truth. The same year the dog lover started Grey's, she starred in a video for singer Josh Kelley and two and a half years later, they were walking down the aisle in Park City, Utah. The couple adopted daughter Naleigh from Korea in 2009 and daughter Adalaide Marie Hope domestically in 2012. Concentrating on family was her stated reason for leaving Grey's although many pointed at her unhappiness with where the character's story went (like dating George), sticky contract negotiations and her increasing big-screen opportunities.