Seth Rogen has starred in (and even written!) some of Hollywood's favorite comedies from "Superbad" to "Neighbors" and plenty in between. In honor of the release of his latest flick, "An American Pickle," on HBO Max on Aug. 6, 2020, Wonderwall.com is taking a look at the Canadian actor-writer's funniest films. Keep reading for more…

RELATED: A definitive list of early aughts films you probably forgot about

In the same vein as Tina Fey's "Mean Girls," "Superbad" — a coming-of-age teen comedy that debuted in 2007 — has turned into an absolute classic. The film, which was co-written by Seth Rogen and frequent collaborator and childhood friend Evan Goldberg, follows the lives of Seth and Evan (Jonah Hill and Michael Cera), two high school seniors who want to lose their virginity before heading off to college. A pinnacle part of this plan? Getting the booze for pretty, popular Jules' (Emma Stone) party — a feat that proves to be far more difficult than they imagined. Seth plays Officer Michaels (seen here with Bill Hader), one of the cops who embark on a crazy night of shenanigans with the teens' pal McLovin… we mean Fogell (Christopher Mintz-Plasse)! As far as recognizable and near-iconic teen comedies go, "Superbad" is definitely one of them.

RELATED: "Wedding Crashers" cast: Where are they now?

Another film that never fails to make us laugh? "Neighbors." Released in 2014, the movie stars Seth Rogen and Rose Byrne as new parents whose lives are turned upside down when a fraternity moves in next door. After making the mistake of reporting a noise complaint, Delta Psi Beta President Teddy Sanders (Zac Efron) declares war against the couple. What ensues is a slew of ridiculous and incredibly hilarious antics — including the pivotal glow-in-the-dark party scene. "Neighbors" also proved to be a major box office success, earning $270.7 million on an $18 million budget.

Given the incredible success of the first installment, it's no surprise a sequel was released two years later! In 2016, "Neighbors 2: Sorority Rising" hit theaters and showed the Radners (Seth Rogen and Rose Byrne) teaming up with former fraternity bro foe Teddy Sanders (Zac Efron) to take down the Kappa Nu sorority next door, which is run by Shelby (Chloe Grace Moretz), so they can sell their home. In addition to producing this flick (along with 2014's "Neighbors"), Seth also co-wrote its screenplay. "Neighbors 2: Sorority Rising" earned $108 million on a $35 million budget.

We all recall the source material… right? Based on the 2013 novel by Greg Sestero and Tom Bissell, "The Disaster Artist" is a biographical drama-comedy that charts the peculiar friendship between Tommy Wiseau and Greg Sestero and the subsequent release of what is widely considered one of the worst movies ever created, "The Room." "The Disaster Artist" stars James Franco and David Franco as Tommy and Greg and Seth Rogen as Sandy Schklair, the first assistant director and script supervisor on "The Rom." Critically, the film was also a hit, earning several nominations including best adapted screenplay at the 2017 Academy Awards.

What happens when a supposed-to-be-meaningless fling results in an unexpected pregnancy? Written and directed by Seth Rogen's frequent collaborator Judd Apatow, 2007's "Knocked Up" follows the fallout of a one-night stand between slacker Ben Stone (Seth Rogen) and career woman Alison Scott (Katherine Heigl) after she finds out she's expecting his child. The film was praised among critics for its likable leads and the script's ability to balance comedy and more sentimental moments. "Knocked Up" was also a box office hit that earned $219.9 million against a $30 million budget. Not too shabby!

Co-produced by Seth Rogen, "The Night Before" is a 2015 comedy that revolves around three childhood friends (Seth, Joseph Gordon-Levitt and Anthony Mackie) who try to attend the hottest, most elite holiday party in New York City. Seth plays Isaac Greenberg, a soon-to-be dad whose main goal is to embark on the wildest night possible with his best friends before he has to settle down and prepare for fatherhood. The comedic flick, which includes cameos from Miley Cyrus and James Franco, earned $52.4 million at the box office.

"Like Father," which debuted on Netflix in 2018, follows Rachel Hamilton (Kristen Bell), a woman recently left at the altar who finds herself in an undesirable situation — on her honeymoon cruise with her estranged father Harry (Kelsey Grammer)! Seth Rogen co-stars as Jeff, Rachel's endearing love interest whom she meets on the cruise. The trio do an exceptional job at elevating an otherwise standard romantic comedy.

There's something particularly refreshing about "50/50." Released in 2011, "50/50" stars Joseph Gordon-Levitt as Adam Lerner, a Seattle-based radio journalist who finds out he has schwannoma neurofibrosarcoma, a rare type of cancer that, according to Google, has a survival rate of 50%. With the help of his best friend and co-worker Kyle (Seth Rogen) and new therapist Katherine (Anna Kendrick), Adam tries to navigates the difficult terrain of living life post-diagnosis. Seth and Joseph's on-screen chemistry allows audiences to explore a generally difficult topic through a lens that is heartfelt at times and aptly comedic at others. "50/50" earned two 2012 Golden Globe Award nominations — best actor in a musical or comedy and best musical or comedy movie.

Imagine reconnecting with your former babysitter only to find out she's now a world leader! Such is the reality for Seth Rogen's character in 2019's "Long Shot," which co-stars Charlize Theron. The romantic comedy focuses on Fred Flarsky, an unemployed journalist who, by happenstance, reunites with his former babysitter, Charlotte Field, who's now secretary of state! After hiring Fred as her speechwriter, the two begin to spend more time together, and it doesn't take long for their friendship to blossom into something more. Praised for their on-screen chemistry, Seth and Charlize shined as the film's leads. "Long Shot" earned $52.9 million worldwide.

A film that brings together a handful of Hollywood's most beloved comedic actors in the best way is "This Is the End." The 2013 comedy, which was written, directed and produced by Seth Rogen and Evan Goldberg, stars Seth, Jay Baruchel, Jonah Hill, Danny McBride and Craig Robinson as fictionalized versions of themselves who band together in Los Angeles amidst the apocalypse. With cameos by Rihanna, Emma Watson and even the Backstreet Boys, "This Is the End" packs a wild, energetic and refreshingly self-deprecating punch. Earning both critical and commercial acclaim, the film made $126.5 million worldwide on a $32 million budget.

While he may not be the star of this film series, Seth Rogen still shines in a supporting role! The franchise's first installment, "Kung Fu Panda," which hit theaters in 2008, follows the expeditions of a panda named Po, a total kung fu aficionado. After learning that a diabolical kung fu snow leopard is going to be released from prison, it becomes Po's duty to take him down. Seth co-stars as the bleak Master Mantis, a member of the Furious Five. Given the film's incredible commercial and critical success — it earned a whopping $631.7 million on a $130 million budget — two more installments were created. "Kung Fu Panda 2" and "Kung Fu Panda 3" debuted in 2011 and 2016.

Queue "Paper Planes" by M.I.A.! Back in 2008, Seth Rogen and James Franco joined forces for "Pineapple Express." Co-written by Seth, the buddy comedy follows a process server and his dealer as they go on the run after witnessing a murder committed by a crooked cop. "Pineapple Express," which was praised by former Chicago Tribune critic Michael Phillips for its "sidewinding conversational riffs" and "why-am-I-laughing? wordplay," was a commercial and critical success that earned $102.4 million on a $26 million budget.

Who could forget this film? Written and directed by Judd Apatow (it was his directorial debut), "The 40-Year-Old Virgin" revolves around the life of Andy Stitzer (Steve Carell), a timid employee at an electronics store who, with the help of his friends (Seth Rogen, Paul Rudd and Romany Malco), ventures into the dating world. Although Seth doesn't lead this comedic flick, his co-starring role as confidant Cal is everything. "'The 40-Year-Old Virgin' is surprisingly insightful, as buddy comedies go, and it has a good heart and a lovable hero," wrote critic Roger Ebert. The 2005 comedy was a major financial success too — it grossed $177.4 million against a $26 million budget!

Who knew a story about anthropomorphic supermarket goods could land so well? 2016's "Sausage Party," which Seth co-wrote and starred in, is an adult animated comedy that focuses on Frank (voiced by Seth), a sausage who learns of his dire fate. Along with his companions, who include a deformed sausage (Michael Cera), a bottle of tequila (Bill Hader) and a taco shell (Salma Hayek), Frank attempts to escape the supermarket and an enemy (Nick Kroll) who threatens his survival. Praised for its humorous screenplay, "Sausage Party" earned $140.7 million against a $19 million budget, making it the highest grossing restricted flick of all time.

2011's "The Green Hornet" — which was co-written by Seth Rogen and Evan Goldberg — marked the Canadian actor's first superhero film. The movie follows Britt Reid (Seth), a rich newspaper publisher who joins forces with Kato (Jay Chou), his late father's assistant, to form a crime-fighting duo. While the film didn't receive rave reviews, Seth suiting up as a bad-guy-busting vigilante is reason enough to give it a watch. "The Green Hornet" earned $227.8 million worldwide against a $120 million budget.

2014's "The Interview" — which was written, co-directed and co-produced by Seth Rogen, who also starred — is a political satire flick that follows two journalists (played by Seth and his "Freaks and Geeks" co-star James Franco) who score an interview with the supreme leader of North Korea (Randall Park), only to be told by the CIA that they have to assassinate him. The film is Sony's highest grossing digital release with $40 million generated in digital rentals.

Starring Seth Rogen and Barbra Streisand, 2012's "The Guilt Trip" follows Andy and Joyce Brewster, a mother-son duo who embark on an action-packed, cross-country road trip from New Jersey to Las Vegas. Despite initially being annoyed by his mother's overbearing presence, Andy begins to realize that bringing her on the trip might have been the best decision he could've made. Seth and Barbra received praise for their on-screen chemistry. 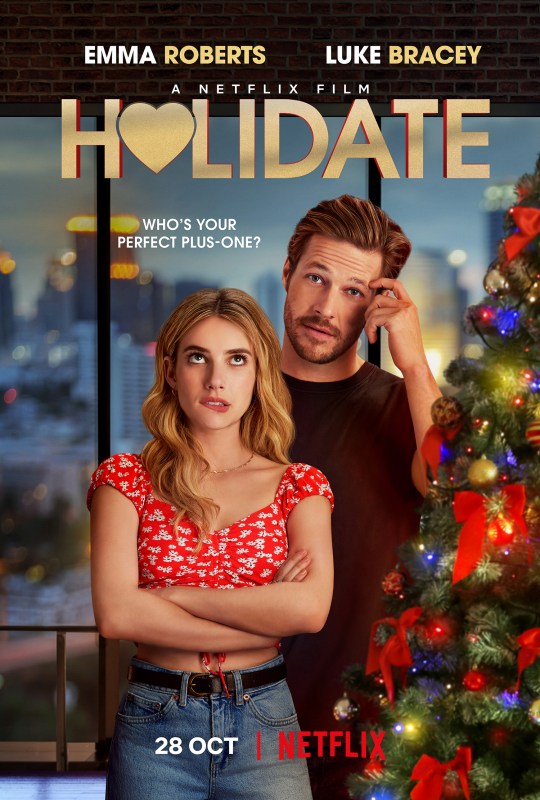 Up Next Rom-com roundup