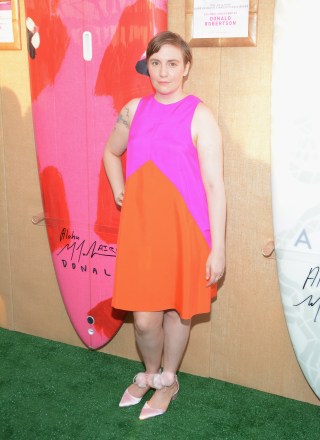 Lena Dunham, the daughter of a painter and photographer, is best known for creating, writing, directing, producing and acting in the Golden Globe-winning HBO series Girls. Time magazine's 2012 Coolest Person of The Year grew up in New York, studied creative writing at Oberlin College, produced the web series Delusion Downtown Divas post-graduation and in 2010 made the short Tiny Furniture, a semi-autobiographical story about a college grad who gets dumped and moves back home. It won the South by Southwest Film Festival's best narrative feature award and piqued Judd Apatow's interest enough to sign on as producer of Girls. Pre-Girls, she had bit parts in the 2011 miniseries Mildred Pierce and the indie horror movie The Innkeepers and occasionally pops up in non-Dunham projects like This Is 40, Adventure Time and Scandal. The Golden Globe winner (and multiple Emmy nominee) just wrapped season 4 of the racy comedy and recently published New York Times bestseller, Not That Kind Of Girl. Her longtime partner is musician Jack Antonoff of Bleachers and Fun.