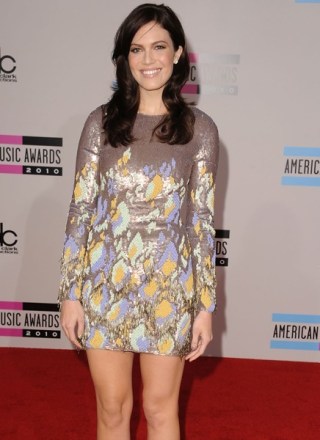 Share Tweet Pin Email
Mandy Moore has one of those storied discovery tales. In 1997, while recording a demo in an Orlando studio, a FedEx employee delivering a package overheard her singing and told his friend in Sony's A&R department. Thanks to the word of mouth, the bubbly blond teen was eventually signed, sent on tour with 'N Sync, became a radio staple and tween queen with her the hit single "Candy," released two platinum albums So Real and I Wanna Be With You, hosted a daily advice and music video show on MTV, signed a spokesperson contract with Neutrogena starred in several films (The Princess Diaries, How To Deal, Saved!), landed on People's 50 Most Beautiful list, won Breakout Female Performance at the MTV Movie Awards for the tearjerker A Walk To Remember and launched a line of graphic tees called Mblem all before she could legally drink. After a long string of star sweethearts including tennis pro Andy Roddick, actors Wilmer Valderrama and Zach Braff, musician Greg Laswell and DJ AM and battling depression in 2007, Moore quietly married Ryan Adams, a singer-songwriter 10 years her senior, in 2009. While she occasionally returns to music, her bread and butter has become acting and in 2010 she became the voice of a Disney princess, Rapunzel, in Tangled.