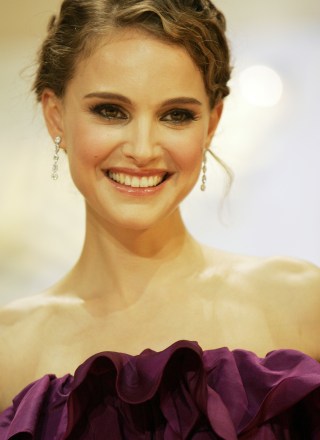 Share Tweet Pin Email
Discovered at age 9 in a pizza parlor by a Revlon scout, Natalie Portman has proven that she has showbiz staying power. She got her start in film as a teen, blowing audiences away with her piercing eyes and mature demeanor in 1994's The Professional and 1996's Beautiful Girls. She cut her Broadway teeth in the title role of a 1997 Diary Of Anne Frank revival and went full blockbuster in 1999 as Queen Amidala in the first Star Wars prequel. The trilingual thespian took a break from 1999 to 2003 to give it the old college try at Harvard. But with her psychology degree in hand, she returned to the industry and racked up both prime parts (Cold Mountain, Golden Globe-winning Closer, Garden State, V for Vendetta, The Darjeeling Limited and The Other Boleyn Girl) and famous flames (Gael Garcia Bernal, Jake Gyllenhaal, musician Devendra Banhart). More proof of the Dior fragrance spokeperson's charmed life? A Best Actress Academy Award wasn't even the biggest score to come out of playing the troubled prima ballerina in Black Swan. It was that set in 2009 where she met choreographer Benjamin Millepied, who she had her first child, son Aleph, with in 2011 and who became her husband at a vegan fete in Big Sur in 2012.