After Ricky Gervais hosted the Golden Globes three years in a row between 2010 and 2012, the British comedian swore he'd never do it again, comparing the experience to "a parachute jump." Said the actor, "You can only really enjoy it in retrospect when you realize you didn't die and it was quite an amazing thing to do." Well, he went back on his word and hosted the 2016 Golden Globe Awards, and he'll be back again for the 2020 Golden Globes on Jan. 5! In past years, the funnyman stirred up a frenzy of controversy while emceeing the show thanks to a slew of celebrity insults and off-color jokes. In honor of Ricky's big return to the Globes, Wonderwall.com rounded up 17 things you probably don't know (but should!) about the star. Keep reading for the scoop…

1. He'll break a Golden Globes record when he hosts the show in 2020

When Ricky Gervais returns to the Golden Globes in 2020, it'll be his fifth time hosting — a record for the annual award show, which went without a host for all but one of its first 66 years. But this time, he's serious about it being the last time: "Once again, they've made me an offer I can't refuse. But this is the very last time I'm doing this, which could make for a fun evening," the funnyman said in a statement, teasing his signature no-consequences sense of humor.

2. He's been with the same woman for nearly four decades

Ricky Gervais started dating girlfriend Jane Fallon in 1982 after they met at University College of London. Jane, the author of five bestselling novels and a former television producer, moved in with Ricky in 1984. The pair is based in Hampstead Village in London where they share a cat named Ollie.

While at University College of London, Ricky Gervais changed his major from biology to philosophy after two weeks. He graduated with an upper second-class honors degree in the subject.

During his final year at University College of London in 1983, Ricky Gervais and friend Bill Macrae formed the music duo Seona Dancing. The group was signed by London Records and released two singles: "Bitter Heart" and "More to Lose." After both songs failed to break the Top 40, the duo split up. But despite not having much success in the United Kingdom, "More to Lose" became a huge hit in the Philippines!

5. His career kicked off in radio

After his music career flopped, Ricky Gervais managed bands — including Britpop darlings Suede — in the late 1980s before becoming the head of speech at London's alternative XFM radio station. It was there that he met writer, director, comedian and future collaborator Stephen Merchant and hired him as an assistant in 1997. The pair hosted a Saturday afternoon radio show together in 1998.

6. His claim to fame only ran for two years

Ricky Gervais and Stephen Merchant collaborated to create, write and direct the British comedy series "The Office." Ricky also starred on the dark comedy as delusional paper salesman David Brent. Although the show, which became a pop culture phenomenon, was arguably Ricky's biggest claim to fame, it only ran for two years between 2001 and 2003. "The Office" has since been remade in Sweden, France, Germany, Quebec, Brazil and, of course, the United States. Both Ricky and Stephen were producers on the U.S. version of the NBC comedy, which starred Steve Carell.

Ricky Gervais has admitted to turning down a number of supporting roles in major blockbuster films over the years — including parts in "Ocean's Twelve," "Mission: Impossible III," "The Da Vinci Code," "Pirates of the Caribbean: Dead Man's Chest," J.J. Abrams' "Star Trek" and the 2011 "Arthur" remake. Instead, he popped up in "For Your Consideration," "Night at the Museum" and "Stardust" before scoring his first starring role in the little-seen yet critically lauded 2008 comedy "Ghost Town." He told Entertainment Weekly the year the film debuted, "I'm not trying to be a film star. I don't care if I never do another film again. I can create my own material and I've got to remember that. As exciting as it is to be a film star, it means nothing to me."

In 2004, Ricky Gervais released his first children's book, "Flanimals." The book, which was illustrated by Rob Steen, depicted silly, somewhat useless animals. After its success, several other sequels — as well as a range of merchandise, including dolls — were released.

Ricky Gervais is a huge animal lover and advocate who supports many animal rights groups and organizations. In 2009, PETA Europe teamed up with Animal Rahat to rescue and retire a 20-year-old bullock from its hardworking life at an Indian sugar mill. The animal, who would've been slaughtered if he hadn't been rescued, was named Ricky in honor of the comedian's birthday. In 2013, PETA named the former star of "The Office" their person of the year, and in 2015, he won the Human Society's Genesis Award.

10. He took a lengthy break from stand-up comedy

Ricky Gervais launched his career in stand-up comedy in the late '90s and enjoyed tremendous success throughout the aughts, hitting the road on a series of four tours. He then took an extended hiatus to focus on other projects before finally returning to stand-up in 2016. "Finally, I'm going to do some stand-up. The first in about six years if you don't count hosting the Golden Globes," he said while performing in London. Since then, he's toured with two shows: "Humanity," which was recorded and released exclusively on Netflix in 2018, and "SuperNature," which will get the same treatment in 2020.

Ricky Gervais considers himself an atheist and humanist. He abandoned Christianity when he was 8 and has written editorials supporting his stance for a secular state as well as on human rights issues. When asked why he chose not to marry his long-term partner, he told reporters, "There's no point in us having an actual ceremony before the eyes of God because there is no God."

During an early 2019 interview with talk show host Ellen DeGeneres, Ricky Gervais explained all the reasons why he's not interested in becoming a father: "There's loads of reasons why I don't have kids," he said. "The world's overpopulated. No one's sitting around going, 'Oh, Rick's not having kids — we're gonna run out!' There's loads. … [Also] they're scroungers — from day one [it's], 'Me, me, me! Feed me! Clothe me!'" He then got serious: "I'd worry sick about a baby," he said. "I've got a cat and I worry about that. I check the door three times before I go out. I put food and water in every room in case the door shuts and it's peckish for 20 minutes. … So, no, a human baby [is] too much responsibility."

13. He's been on a weight-loss journey for several years now

In 2010, Ricky Gervais lost around 20 pounds by going for jogs and cutting down on late-night meals. "It wasn't so much about the weight. It was more that I was a fat, lazy, out-of-shape slob, to be honest," he joked to People magazine, noting that he "didn't eat differently" but "probably just stopped having that second meal at 11:30 at night." In 2017, however, he told talk show host Kelly Ripa that the weight was "steadily going back on again" because his "knees are gone" and he can't run as well anymore. "I [lost the weight] by exercise. I didn't give anything up. I still eat what I want, I drink wine every night and I work out like Rocky the next day," he said. "But now my body won't let me do that anymore. … But I'm still not giving up the food and drink."

Ricky Gervais dished on his fascination with reality television during a 2006 interview with the New York Post: "I've been fascinated with reality game shows, docu-soaps, fame, Andy Warhol's prophetic statement that in the future everyone will have 15 minutes of fame," he said. "'The Office' was born of me watching those reality game shows and docu-soaps — I'm fascinated with fame and what makes people desperate to be recognized." Some of his favorite shows at the time were "Celebrity Big Brother" and "I'm a Celebrity… Get Me Out of Here!"

15. He broke a Guinness World Record with his podcast

In late 2005, Ricky Gervais's comedic radio program "The Ricky Gervais Show" became a podcast. Within months, it had become the No. 1 podcast in the world. In 2007, it broke the Guinness World Record for most downloaded podcast. By early 2011, when Adam Carolla finally broke the record, it had been downloaded more than 300 million times.

Golden Globes host Ricky Gervais is also a Golden Globe winner. In 2004, he took home the prize for best actor in a comedy series for his work on the British version of "The Office." Since then, he's been nominated twice more in the same category: in 2008 for his work on "Extras" and in 2015 for his performance on "Derek." He also scored Emmy nominations for hosting the Golden Globes in 2011, 2012 and 2016, and he's taken home Emmy gold twice: in 2007 for his performance on "Extras" and in 2006 for his work as a producer on the American version of "The Office."

17. He's revived his David Brent character from the British version of "The Office" several times over the years

In 2007, Ricky Gervais performed as David Brent — his alter ego from the British version of "The Office" — at the Concert for Diana, a British benefit concert in Princess Diana's honor. The character popped up on two episodes of season 7 of the American version of "The Office" in 2011. Two years later, the wannabe rock star launched a series of YouTube videos, "Learn Guitar with David Brent." In 2016, he starred in the faux documentary "David Brent: Life on the Road,"which was about touring with his fictional band, Foregone Conclusion. That same year, he released the "David Brent Songbook" and the album "Life on the Road." 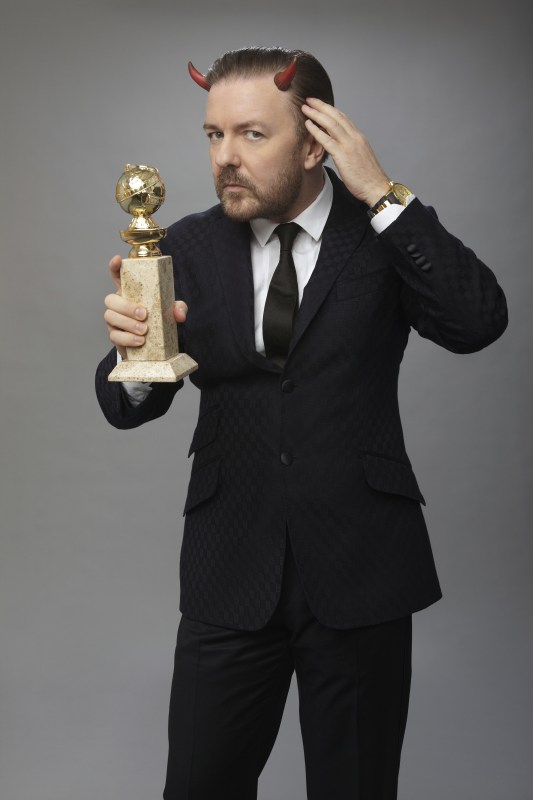 Up Next Globes O.G.