Melissa McCarthy had a banner year! The hilarious actress celebrated plenty of career highs in 2016 — from winning prestigious awards to being named the second highest-paid actress in Hollywood — and Wonderwall.com is rounding up her most impressive moments of the year! Keep reading to see how Melissa dominated the last 12 months…

Melissa McCarthy started off 2016 with a bang — in the form of a major award! The actress attended the 42nd Annual People's Choice Awards in Los Angeles on Jan. 6, 2016, where she took home a statuette for best comedic movie actress. "Every time you buy a ticket, every time you go to see a movie, every time you support it, you allow me to live out a crazy dream. I always feel like I should pinch myself because I can't believe that I can do it," Melissa said in her acceptance speech.

In January 2016, Melissa McCarthy not only took home a People's Choice Award but celebrated her first ever Golden Globe Award nomination. The actress got a nod in the Best Performance by an Actress in a Motion Picture – Comedy or Musical category for her work in "Spy."

Aside from amassing award nominations and trophies, Melissa McCarthy also had a surprise hit on her hands at the box office in January 2016. Despite dismal reviews, Melissa's "The Boss" grossed $77.9 million, well surpassing its $29 million budget. Not only did Melissa star in the flick — she also co-wrote and produced it (while husband Ben Falcone co-wrote, produced and directed the comedy).

Melissa McCarthy landed herself on a very esteemed list in April 2016 when she was named one of the 100 Most Influential People by Time Magazine. Melissa — one of only 40 women on the list — was honored with a piece written by director Paul Feig. "She finds reality and heart inside every character she plays, and she never sacrifices three-dimensionality for a laugh. She embraces her characters' flaws and strengths and plays them as equally important. She finds the humanity in every role she takes on," Paul said of the actress. (And he should know: They've worked on four movies together — "Bridesmaids," "The Heat," "Spy," and "Ghostbusters.")

Melissa McCarthy picked up two MTV Movie Award nominations in April 2016. The star was up for Best Comedic Performance and Best Fight for her work in "Spy." She lost out in both categories to Ryan Reynolds, who won for his work in "Deadpool." But Melissa didn't go home empty-handed: She became the first woman to ever take home the shows' Comedic Genius Award that night.

Melissa McCarthy made an exciting announcement for "Gilmore Girls" fans while on "The Ellen DeGeneres Show" in April 2016. The star revealed she would be returning for the Netflix relaunch of the series, reprising the role of Sookie St. James. Melissa told Ellen, "We could not get those schedules to work [for the reboot]. And there was a whole thing. And then I was gonna be out of the country and blah, blah, blah. And literally about an hour-and-a-half ago, we figured out that I'm going to go back and do it, and I am so excited. And they are gonna be amazing."

In 2016, Melissa McCarthy said goodbye to a major part of the career — her hit sitcom "Mike & Molly." The CBS series ran for six seasons, premiering back in 2010, but news that the show would be canceled made waves at the end of 2015. When the news originally broke, Melissa tweeted, "I was shocked and heartbroken when @CBS canceled #MikeAndMolly. I would have shot this show for 50 more years. I'll miss my 2nd family." The final episode aired in May 2016.

Melissa McCarthy was part of the all-female cast of the "Ghostbusters" remake, which was released in July 2016. The actress starred alongside Leslie Jones, Kristen Wiig and Kate McKinnon in the flick, which grossed $228 million worldwide.

Melissa McCarthy is a renaissance woman! The star trotted out the fall collection of her clothing line, Melissa McCarthy Seven7, in July 2016. The line — which features looks that range from $80 to $160 — is available via the Home Shopping Network, on MelissaMcCarthy.com and in department stores. Of the line Melissa told Chelsea Handler, "I've been every size in the world, but after I was a size 12, it was, like, apparently I'm 'done' dressing. My line is all sizes because I was like, 'Women don't stop' — I don't know why I would stop at a certain size; that seems odd to me."

When fellow star Jennifer Aniston wrote an op-ed for the Huffington Post in July 2016 asking for the media to refrain from scrutinizing women for the way they look, Melissa McCarthy backed up the sentiment. Melissa told "Entertainment Tonight" that she agreed with Jennifer's op-ed "100 thousand billion percent," adding, "Everybody needs to stop tearing down women. It's always about the way we look — saying, 'He's very interesting,' 'He's a good writer,' 'She's looking older than she was last time we saw her,'" Melissa shared. "It's a ridiculous thing. I just hope it gets to the point where it's embarrassing for people to have such a shallow thought."

The summer of 2016 continued to be good to Melissa McCarthy: The superstar was honored with the prestigious Gilda Radner Award for Innovation in Comedy in New York City in July. The award is given out in honor of Gilda — the legendary "Saturday Night Live" original cast member — and is "presented to a female comedian who embodies the fun and comedic genius" of the late actress.

She's the second highest-paid lady in Hollywood! Melissa McCarthy was named No. 2 on Forbes' list of The World's Highest-Paid Actresses in August 2016. The star took home $33 million, bringing in $10 million more than she made the year before. Part of that is related to her newest endeavor, creating her own clothing line. "I started to think if I could do anything to build women up rather than the constant tear-down, I'm going to do it," Melissa told Forbes.

Another surprising venture! Melissa McCarthy delved into another realm of the entertainment industry in 2016 — music! The star lent her voice to Barbra Streisand's duets album, partnering with the music legend to sing "Anything You Can Do" from "Annie Get Your Gun" for Babs' August 2016 release titled "Encore: Movie Partners Sing Broadway."

Melissa McCarthy reprised her role as Sookie St. James in November with a brief appearance on "Gilmore Girls: A Year in the Life." Sadly, we had to wait till the fourth episode to see Melissa McCarthy, but catching her as Sookie in the kitchen of the Dragonfly Inn making cakes — in the role that made her famous no less — was worth the wait! 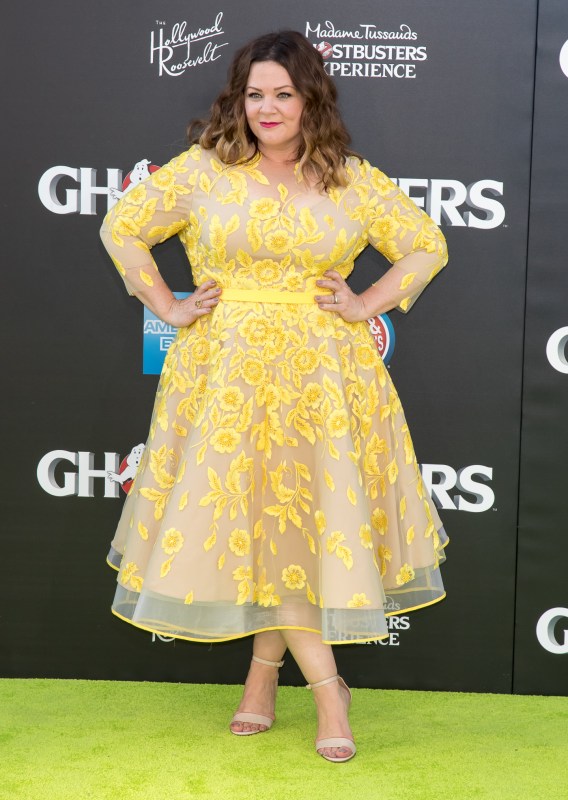 Up Next Melissa's Year!