Break out the champagne — Miley Cyrus has a new album dropping Sept. 29, 2017! The transformative singer is releasing her first studio album in two years, "Younger Now," and it's a big departure from where she was during her "Bangerz" days. In honor of the occasion, we're taking a look back at all the highs and lows from Miley's big career. Keep reading for the highlights…

RELATED: Miley's transformations over the years

It was her Destiny

On Nov. 23, 1992, "Achy Breaky Heart" singer Billy Ray Cyrus and his girlfriend, Leticia "Tish" Finley, welcomed daughter Destiny Hope. (Months earlier, another woman gave birth to Billy Ray's first child, son Christopher Cody.) The following year, while she was pregnant with their second child, Tish and the country crooner made it official. Billy Ray adopted his new wife's two children from a previous relationship, and in 2000, they made it Seventh Heaven when Tish gave birth to their third child together. The family of seven lived together on a 500-acre farm outside Nashville, where little Destiny earned the nickname "Smiley" — which was eventually shortened to just "Miley."

RELATED: Most popular song the year you were born

After nearly a decade away from the spotlight, musician Billy Ray Cyrus returned to the small screen in 2001 with a starring role on TV series "Doc" — and he took his daughter with him. Miley Cyrus appeared in a few episodes of her dad's show from 2001 to 2003 before scoring her big break playing young Ruthie in Tim Burton's "Big Fish."

RELATED: Your favorite '90s stars then and now

In 2005, 13-year-old Miley Cyrus won the lead role on Disney's "Hannah Montana." This time, it was the young actress who gave her famous father a helping hand: Billy Ray Cyrus was cast to play her on-screen alter ego's dad. Thus began the early days of Miley Mania! "Hannah Montana" quickly became the most-watched show for kids ages 6 to 14, and the series' soundtrack debuted at No. 1 on the Billboard 200. In 2007, Miley released her debut album, "Hannah Montana 2: Meet Miley Cyrus," and headed out on the road on her first tour. Her concert tickets were snapped up so quickly that investigations into ticket sales were launched in at least four states.

Miley Cyrus was first linked to Nick Jonas in July 2007. The following month, the Jonas Brothers appeared on an episode of "Hannah Montana" and joined Miley on the road as an opening act on her debut tour. But it wasn't meant to be for Miley and Nick: They called it quits once in late 2007 before reconciling and then were off-and-on until 2009. "Nick and I loved each other," she told Seventeen magazine in 2008. "For two years he was basically my 24/7."

It didn't take long for Miley Cyrus to embrace her wild-child ways — in spite of her G-rated Disney image. In 2008, risqué photos of the 15 year old began to surface on the Internet. In one shot, Miley was pictured pulling down her white tank top to reveal a lacy green bra, and in another, she was shown lying across the lap of her then-boyfriend with her midriff exposed. The child star made headlines for the second time in 2008 when she posed for Vanity Fair — seemingly in the nude! In the racy spread, Miley was pictured with only a sheet covering her bare torso, though she was technically clothed from the waist down. The spread drew criticism from the young star's family-oriented and faith-based fans.

In 2008, Miley Cyrus' sophomore album, "Breakout," debuted at No. 1. Later that year, she officially launched her film career, voicing a character in Disney's animated film "Bolt." The singer-actress even earned a Golden Globe nomination for best original song for its theme tune, "I Thought I Lost You."

Miley Cyrus romanced "Nashville Star" contestant Justin Gaston from September 2008 to June 2009. The young actress addressed their breakup on Twitter, writing, "Tears are words the heart can't express." Less than a week after her split from Justin, Miley briefly reconciled with Nick Jonas. But it was to be their final romantic reunion: Two months later, the 16 year old was spotted getting cozy off-set with her "The Last Song" co-star Liam Hemsworth.

After falling in love with Australian hunk Liam Hemsworth on the Georgia set of "The Last Song," Miley Cyrus deleted her Twitter account — much to the dismay of her more than 2 million followers. "FYI Liam doesn't have a Twitter and he wants ME to delete mine with good reason," she explained before going silent on social media. Miley and Liam went on to spend a year of bliss together before calling it quits in August 2010. The duo reunited and broke up once more before reconciling once again by the end of the year.

Miley Cyrus isn't the only member of her famous family who's struggled with an off-and-on romance: In October 2010, her parents announced plans to divorce after 17 years of marriage. But by March 2011, Billy Ray Cyrus and Tish Cyrus had reconciled — at least until two years later, when Tish filed a second set of divorce papers. Somehow, against all odds, the duo reconciled for a second time in mid-2013 and their divorce was later dismissed.

Miley Cyrus celebrated her 18th birthday by making headlines with yet another round of bad behavior: In December 2010, a video of the Disney star smoking salvia, a hallucinogenic (but legal!) herb, out of a bong hit the Internet. The scandal prompted dad Billy Ray to tell GQ magazine, "I'm scared for [Miley]." He went on to say, "The damn show ['Hannah Montana'] destroyed my family." But the salvia scandal was only the latest in a string of headline-making incidents that had Miley's wholesome fan base raising their eyebrows throughout 2010. As the teen queen traveled the globe promoting her "Can't Be Tamed" album, her performances had become increasingly provocative and her wardrobe noticeably more sexy.

Over the course of 2013, the Disney star completed a dramatic transformation: The shorter Miley Cyrus cut her hair, the more rebellious and edgy her image became. In the lead up to the October 2013 release of her "Bangerz" album, the singer-actress made headlines time and time again for her provocative behavior on social media and in the press, which included donning pasties for public outings, enthusing about marijuana, singing about ecstasy and cocaine, sticking out her tongue instead of smiling in photos, incessant twerking and more.

Miley Cyrus' transformation into an NC-17 wild child culminated in August 2013 when she performed on the MTV Video Music Awards alongside Robin Thicke. The bizarre and hyper-sexual performance, which included plenty of grinding and twerking by a nude-bikini-clad Miley, drew criticism from countless sources. It also sealed the pop star's place as one of the most interesting acts in Hollywood today.

Miley Cyrus' "Bangerz" album thrived in the face of controversy and quickly hit No. 1 on the Billboard charts in 2013. The music video for her second single, "Wrecking Ball," in which she swings around nude on a wrecking ball, broke Vevo's record for the most-viewed video. Miley's love life appeared to be thriving as well: The singer-actress reportedly shared a steamy Halloween makeout session with Good Charlotte rocker Benji Madden and rumors linked her to "Bangerz" producer Mike Will Made It and Rolling Stone photographer Theo Wenner.

Dating a Schwarzenegger and a Victoria's Secret model

By November 2014, Miley Cyrus had moved on with none other than Patrick Schwarzenegger. The two went to a bunch of Hollywood events together and supported Patrick's alma mater at a USC game on Nov. 13, 2014. By the following April, the young couple had called it quits after photos of Patrick taking body shots off a female friend in Mexico were released. A few months later in the summer of 2015, Miley — who self-identifies as gender fluid and pansexual — was romantically linked to Victoria's Secret model Stella Maxwell.

In 2014, Miley Cyrus once again made waves at the MTV Video Music Awards. But it wasn't for reasons you might think. When she won the video of the year Moonman for "Wrecking Ball," Miley had a 20-something homeless man accept her award for her. The man was someone Miley met at My Friend's Place and she wanted to use her platform to educate people on homeless youth.

Nicki Minaj may have been online feuding with Taylor Swift leading up to the 2015 MTV Video Music Awards, but on the night of, she had her eyes set on someone else. In the week leading up to the show, Miley called Nicki "not too kind" and "not very polite." On the night of the show, Nicki clapped back at Miley, saying: "And now… back to this b—- that had a lot to say about me in the press. Miley, what's good?" This came on the heels of Nicki's win for her "Anaconda" music video. A stunned Miley hesitated before insisting that her comments had been manipulated, to which Nicki could be seen mouthing back, "Don't play with me, b—-." Luckily, that seemed to be the end to that weird feud.

By the end of 2015, Liam Hemsworth and Miley Cyrus had reconnected with each other. Within weeks, they were reportedly living in adjacent homes in Malibu and Miley had reportedly given up her party-fueled lifestyle and gotten back into yoga. In 2017, Miley opened up about why they split and what prompted them to get back together. "Changing with someone else not changing like that is too hard," she explained to Billboard. "Suddenly you're like, 'I don't recognize you anymore.' We had to re-fall for each other."

Coaching on "The Voice"

In 2016, Miley Cyrus dazzled audiences when she appeared on "The Voice" as an adviser. She then became a full-time coach on Season 11, skipped Season 12 and decided to pick up her coaching gig again — on Season 13, Miley joins Jennifer Hudson, Blake Shelton and Adam Levine in the rotating chairs. Miley gets kudos for being the youngest judge in the show's history. You go, girl!

By January 2016, it was reported that Miley Cyrus and Liam Hemsworth were engaged again. While she's been rocking her original engagement ring from Liam for nearly two years now, she's said they're in no rush to get married. "I don't envision marriage. I'm 24. I hope I get to live a little bit more. I have too much living to do [before I get married]," she told The Sun on Sunday in September 2017.

On May 11, 2017, Miley Cyrus released "Malibu," the first single off her sixth studio album, "Younger Now." The full album is set to be released on Sept. 29, but we've already had a glimpse into some of its other tracks: The 24-year-old singer released the song "Inspired" in time for the One Love Manchester benefit concert in June 2017. 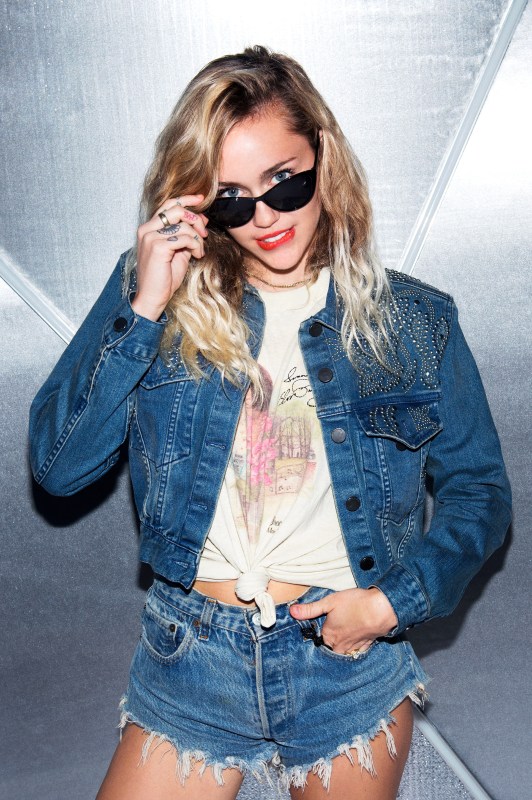 Up Next Just Being Miley