ABC's hit "Nashville" is packed with plenty of delicious drama, from love triangles to a famous mama struggling with postpartum depression. There are a number of pretty faces — Hayden Panettiere and Connie Britton among them — but when it comes to dreamy eye candy, it's all about the show's fine gentlemen like Jonathan Jackson, Will Chase, Charles Esten, Chris Carmack and more. Keep reading to feast your eyes on the hunks of "Nashville" ahead of the series' mid-season premiere on March 16, 2016…

He made a name for himself as a '90s heartthrob when he played Lucky Spencer on "General Hospital." But Jonathan Jackson found a new audience thanks to "Nashville," landing the role of alt-country artist and songwriter-turned-producer Avery Barkley, a stand-up fella who has a baby with and marries Hayden Panettiere's country pop star character, Juliette Barnes.

We fell for Chris Carmack when he played jock Luke Ward on "The O.C." and continue to swoon over him on "Nashville" where he plays Will Lextington, a country star on the rise who refuses to publicly reveal that he's gay.

London-bred bloke Sam Palladio plays the wholesome and hardworking Gunnar Scott, a songwriter who started gaining attention in the music world after he wrote a hit for country star Luke Wheeler, played by Will Chase. Sam is one heck of a singer too: Check out his rendition of "If I Didn't Know Better" with "Nashville" co-star Clare Bowen.

Every show has its big love story and Charles Esten, who plays country crooner Deacon Claybourne on "Nashville," is at the center of the drama's heartwarming storyline. He plays lover to Connie Britton's Rayna Jaymes, with whom he has a painful history: 20 years ago, they played in a band together, fell for each other and had a child he never knew about because his drinking tore them apart. But oh did they reunite! Makes sense that Charles is "The Man" on "Nashville." His stats prove he earned that title after years of toiling in Hollywood on everything from "Whose Line Is It Anyway?" and "Big Love" to "The Office" and "ER."

Handsome gent Will Chase plays Luke Wheeler, a country superstar who was engaged to Connie Britton's Rayna James — until she ditched him on their wedding day. But "Nashville" isn't his first musical rodeo: Will's impressive pipes have landed him countless roles on Broadway, plus he's appeared on everything from "The Good Wife" to "Law and Order: Criminal Intent" and "Smash."

Eric Close plays Teddy Conrad, the ex-husband of Connie Britton's Rayna Jaymes. He's become mayor of Nashville but is constantly tangled in drama — like that time he mistakenly got caught up with prostitutes. Eric has also been seen in "American Sniper" and on USA's "Suits."

Kate Hudson's big brother Oliver Hudson played sleezy record exec Jeff Fordham, a shady businessman with a rep for sleeping with his artists. Oliver, who may not be as well-known as his sis, has had his fair share of other gigs too, including a recurring role on "Dawson's Creek" and a lead role on "Rules of Engagement." He currently stars on "Scream Queens."

Riley Smith's Markus Keen was signed to Rayna Jaymes' record label, Highway 65, on "Nashville." He became a bratty thorn in Rayna's side but looked oh-so-good doing it! Riley has plenty of acting credits to his name thanks to roles on everything from "Freaks and Geeks" and "24" to the reboot of "90210" and "True Blood."

Is it just us, or does Keean Johnson, who plays Colt Wheeler on "Nashville," resemble a young Heath Ledger?! Colt is the son of Will Chase's character, Luke Wheeler. Consider Keean, who's also been seen on "The Fosters," appropriate eye candy for the tween generation of "Nashville" fans. 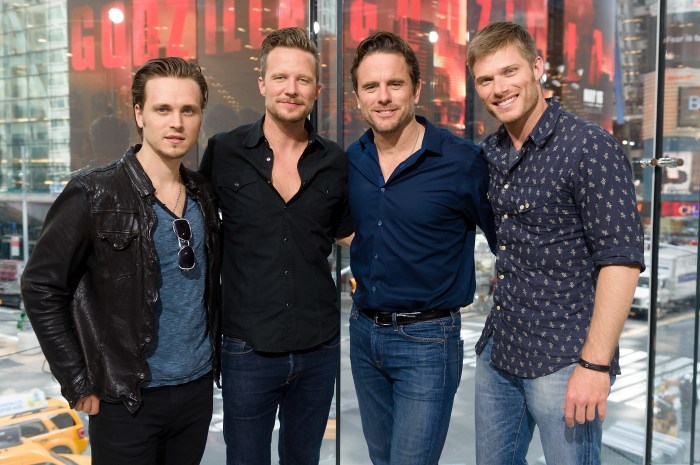 Up Next 'Nashville' hunks