Ricky Martin has been an entertainer for more than three decades. We've seen him grow up, come out as a gay man, have kids on his own, find love, have more kids, star in popular TV shows and make music. Time has certainly been good to this guy. In honor of his newest gig — hosting the 2019 Latin Grammy Awards on Nov. 14 — Wonderwall.com is taking a look back at some of the things you might not know (but should!) about Ricky's crazy life…

At the young age of 12, Ricky Martin was catapulted to fame after landing a spot in the Puerto Rican boy band Menudo. He auditioned three times before getting the gig in 1984. Ricky recorded 11 albums with Menudo and stayed with the group until he was 17, finally leaving to reevaluate his career after a grueling couple of years of touring, recording and traveling.

2. Ricky Martin's role on "General Hospital" made him a household name

Surprise! Ricky Martin can act too! His TV career took off after he landed a year-long stint on the popular daytime soap opera "General Hospital" in 1994 playing sexy singer-bartender Miguel Morez. He later said he was asked to take vocal lessons to soften his Puerto Rican accent, which he refused to do.

Ricky Martin's first big hit in America, "Livin' La Vida Loca," made history when it was released in March 1999. Most notably, it was the first U.S. No. 1 single that wasn't made using traditional recording techniques but instead was produced using the computer program Pro Tools. The hit song's music video was nominated for nine MTV Video Music Awards and Ricky took home five of them. The album it was on, Ricky's self-titled English-language debut, was certified seven-times platinum in America and sold a whopping 15 million copies worldwide — making it one of the bestselling albums of all time. 'Livin' La Vida Loca" was also credited with starting the Latin pop explosion that saw the rise of stars like Shakira, Enrique Iglesias, Paulina Rubio, Marc Anthony and more in mainstream music in America.

4. He became a single dad to twin sons in 2008 via surrogacy

Long before Ricky Martin married artist Jwan Yosef (more on that in a moment), he started a family on his own. He welcomed twin sons — Matteo and Valentino — in 2008 via a gestational surrogate. "Adoption was one option, but it's complicated and can take a long time," he explained to People magazine at the time. "Surrogacy was an intriguing and faster option. I thought, 'I'm going to jump into this with no fear.' I put my name on the list for one baby and then found out I got two!"

Ricky Martin began dating Syria-born Swedish artist Jwan Yosef in 2016 and they quietly tied the knot in 2018. The couple welcomed their first child together via surrogate — Lucía Martin-Yosef — in 2018. Son Renn arrived in October 2019.

Ricky Martin fell for his future hubby's art before he ever saw his handsome face in person. Ricky told TV host Andy Cohen that after seeing Jwan Yosef's art on Instagram, he decided to send the painter a message. "Then we were talking for like six months without me hearing his voice. We talked about art — nothing sexy… He used to live in London, I went to London and I met him," Ricky explained.

7. He had a long relationship with Mexican TV host Rebecca De Alba

Back before he came out as a gay man, Ricky Martin was in a long and incredibly private on-and-off relationship with Mexican TV host Rebecca De Alba. "I had my girlfriend, who was a woman that I dated on and off for nine years," Ricky — who's previously talked about being sexually attracted to women as well as men — told Vulture after he came out as "a fortunate homosexual man" in 2010. "And I had this woman who was amazing. Unfortunately, we don't talk anymore, but she was amazing, and she was powerful and she knew about me. She knew I was gay, but we were together."

8. He has a sweet story about how his older kids found out he was famous

Though Ricky Martin kept his twins with him on the road and they were around the business every day, for a long time, they didn't really know he was a big deal as he kept them backstage. "Their perception of my job was to see me from the side singing," he told People magazine. When they learned he was famous, their reaction was priceless. "One day, when I thought that they were big enough, I said, 'Go to the front of the house [in the audience],' and they see the lights and the whole spectacle," Ricky added. "When the show was over, they came to me and said, 'Papi, you're Ricky Martin.' I said 'I'm not Ricky Martin, I'm your father.' They said, 'No, no, no, you're Ricky Martin,' and so it changed."

9. He had a residency in Las Vegas

Viva las Vegas! In 2017, Ricky Martin started his "All In" residency at the Monte Carlo Resort and Casino in Sin City. Things went so well, he extended it into 2018 and inked a new deal. For each ticket he sold, he donated $1 to the Ricky Martin Foundation, which helped Puerto Rico after the island nation endured massive damage from Hurricanes Irma and Maria in 2017.

When it came to create a space for their growing family, Ricky Martin and husband Jwan Yosef turned to famed interior designer Nate Berkus to help make their house a home. "Ricky and Jwan are both artists, and they have very particular ideas about how they want to live," Nate told Architectural Digest. "Ultimately, I helped give them a solid, neutral foundation that they can cultivate together to make the home truly theirs. The sense of place is all about the future of their family." 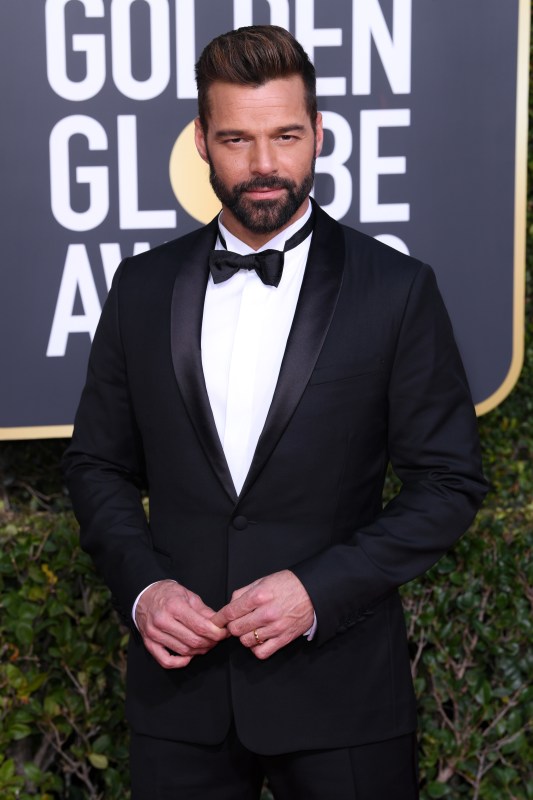 Up Next Livin' la vida loca