Brooke Shields reveals Donald Trump once asked her out

Add Brooke Shields to the list. Emma Thompson, Salma Hayek and Candice Bergen have all previously revealed that now-President Donald Trump asked them out years ago, and on the Oct. 3 episode of "Watch What Happens Live With Andy Cohen," Brooke, too, confirmed The Donald once pursued her (via E! News). Andy showed Brooke an old photo of herself with Donald at what she said was a "charity food event" and asked her if he hit on her. "No," Brooke said, "but he did ask me out later." She went on to say she didn't go out with him. "He called me. I was on location doing a movie, and he called me right after he had gotten a divorce [from Marla Maples]," Brooke told Andy. "He said, 'I really think we should date, because you're America's sweetheart, and I'm America's richest man, and the people would love it.'"

Is Ben Affleck headed back to rehab?

In March, Ben Affleck revealed he'd completed rehab for alcohol addiction. He also went to rehab in 2001. But now, In Touch reports in its new issue out Oct. 4, people close to him are saying he needs to go back. "[Ben's] drinking has gotten worse," a source told the magazine. "He's spiraling out of control." An insider added, "People are urging him to go into inpatient rehab [this time]" and stay longer than he ever has before. After Ben went public with girlfriend Lindsay Shookus this summer, the magazine reported that he shared a bottle of wine with her during a dinner date at Giorgio Baldi restaurant on July 6. He was also, the mag claims, drinking booze at HBO's Emmy afterparty on Sept. 17. "He ordered a water [at the bar]," said a witness, but once he joined Lindsay in a booth, "A waiter brought a short glass filled with whiskey and Coke." Ben knows he needs help again, says the source: "The problem is that he wants to go on his terms. He wants to do it on his time, but like most addicts, that time keeps getting put off."

Tom Cruise is back to work on "Mission: Impossible 6"

Seven weeks after breaking his ankle while filming a rooftop stunt in London for the next installment of the "Mission: Impossible" franchise, Tom Cruise is back at work. On Oct. 2, Tom was photographed on the "M:I 6" set in Brentwood, England (DailyMail.com has exclusive photos), where he was seen piloting a helicopter attached to a camera rig and driving a truck. Initial reports said he would need eight or nine weeks to recover, but apparently Tom has proved them wrong. Despite the production delay, reportedly a first for one of Tom's action-adventure movies, Paramount has confirmed the film will still be released on July 27, 2018.

Kirstie Alley is courting controversy after suggesting in a series of tweets that psychiatric drugs are behind the spate of mass shootings in America. "We have to solve the mystery of why there were no 'shooters' or almost 0 before the 1980's. I know one common denominator other than guns," she tweeted on Oct. 2, one day after a gunman killed 59 and injured more than 500 in a Las Vegas massacre, DailyMail.com reported. The Vegas gunman, who committed suicide as police moved in, was reportedly prescribed diazepam (aka Valium) in June. She continued: "One additional common denominator of 'shooters' is USA's mass usage of psychiatric drugs. A % do have side effects of VIOLENCE & SUICIDE." Kirstie is a devout Scientologist. The religion and its members including Tom Cruise have famously opposed psychiatry, psychology and the use of psychiatric drugs. When another tweeter responded, "Did you really just say that? Sit down. 58 people are dead," Kirstie replied, "Yes I did say it. It happens to be a common denominator in shooters… one that didn't exist before the 80's… not my opinion. Statistic based," adding, "it's an actual [bonafide] black box warning label on these drugs as possible side effects. VIOLENCE & SUICIDE."

Welsh singer Charlotte Church is married! She's confirmed that she and musician boyfriend Jonathan Powell, whom she's been dating since 2010, have quietly wed. "Seriously happy people," she captioned a wedding photo on Twitter on Oct. 4. The Sun reports that Charlotte and Jonathan tied the knot at a registry office in Cardiff on Sept. 14 then followed it up with a "blessing party" in the garden of their home. Charlotte has two children from a previous relationship with rugby star Gavin Henson.

Kim Kardashian West was livid after seeing unflattering bikini photos of herself posted online while she was on a beach vacation last April. A preview from the Oct. 8 episode of "Keeping Up With the Kardashians" released on Oct. 4 (via E! News) shows Kim laying out with friends and sister Kourtney when her assistant alerts her to the paparazzi photos. "Like, I don't get it!" Kim laments as she looks at them on a phone. "Like, I literally don't look like this!" She goes on to insist that she was just trying to mind her own business. "I'm already having this anxiety attack over security, and I'm already just on high alert and now paparazzi's found us," she tells the camera. "I'm doing all the steps to try to be as private and discreet as possible and then you take pictures." Kim also complained about the same photos back in June during an appearance on "The View," alleging they'd been digitally altered to make her look "way worse," explaining, "people were Photoshopping them and sharpening them. I definitely was not in my best shape. I hadn't worked out in about 12 weeks, I'd had two surgeries on my uterus."

Ryan Seacrest and Jensen Ackles used to be roommates

Before Ryan Seacrest was a multi-millionaire mogul, he was a radio DJ hustling to make it big. Back then, he was roommates with "Days of Our Lives" actor Jensen Ackles, they revealed on the Oct. 1 episode of "Live With Kelly and Ryan," where Jensen, who's now better known for his work on "Supernatural," was a guest. "It was a long time ago my friend," Jensen said, cringing as a photo of him and Ryan looking impossibly young at a '90s house party they threw back in the day flashed on the screen (see it here, via E! News). "You can't compete with this guy though," Ryan said. "When you roll up to a party with him, no one wants to talk to you." Jensen challenged, "Are you kidding me? You can compete, because I've got frosted tips! Who wants that? Nobody!" They continued to reminisce: "You were on the radio. You were doing the morning show. I was [doing the soap opera]. [We were] the E list," Jensen added.

Nearly a year after she split from her husband, "Glee" alum Naya Rivera is giving the marriage another go. "She is back together with Ryan Dorsey," a source told E! News on Oct. 3. "They want to make it work for the sake of their son." E! also confirms that last week, Naya — who briefly dated David Spade earlier this year — filed a request to dismiss her original divorce petition, which was filed in November 2016. The couple are parents to son Josey, 2.

ABC's reboot of "American Idol" started filming auditions with its three new judges — Katy Perry, Lionel Richie and Luke Bryan — at Madison Square Garden in New York City on Oct. 3. The next morning, the network released the first official photo of its judging panel (along with host Ryan Seacrest) and the judges made their first appearance as a trio on "Good Morning America." But instead of the usual light-hearted jokes about their judging styles or getting to know one another, the musicians instead talked about their reactions and feelings about the Oct. 1 massacre in Las Vegas where Luke's friend Jason Aldean was performing as the first shots rang out. Katy also urged people to take a "good, hard look" at gun reform. "Prayer without action is powerless," she said.

Though it's unclear who's currently in — and out — of Taylor Swift's squad, Kesha has made it clear she's in the former category. In a new Rolling Stone cover story released on Oct. 4, Kesha praises the embattled "Look What You Made Me Do" singer, who memorably donated $250,000 to Kesha in 2016 to help cover the costs of her epic legal battle with Dr. Luke. Taylor, Kesha told Rolling Stone, "is a f—ing sweetheart. Very, very sweet, very, very genuine, extremely generous, picks up the phone every time I call her. My mom doesn't even always pick up the phone!" Kesha also refused to take the bait when the reporter asked Kesha to weigh in on Taylor's latest controversies. "I'm not really up on my pop culture," she replied. "Should I know something about it? I live in my record player."

Getty Images for The Roundhouse Trust 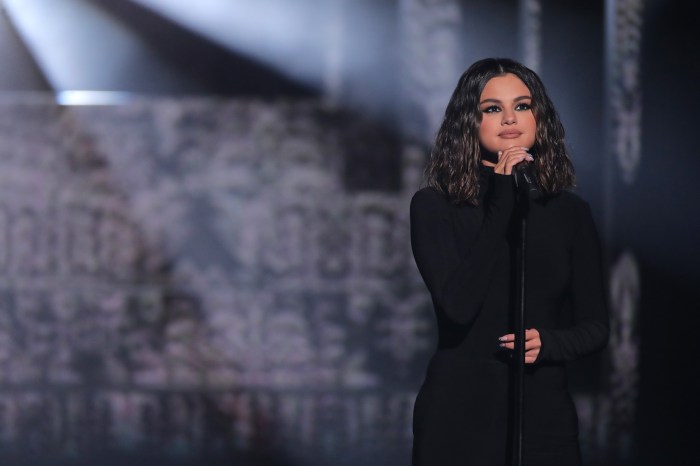 Up Next New Romance?