Selena Gomez's black leather motorcycle-jacket-inspired Coach minidress, which featured a zipper that ran all the way down the front, made us really, really nervous. It was a wardrobe malfunction just waiting to happen. To make matters worse, it wasn't especially flattering on the petite singer-actress, who used the AMAs as an opportunity to debut her new 'do…

Selena Gomez debuted her new 'do — a blonde shoulder-length bob with her dark roots exposed — during the AMAs. We weren't especially wild about her new look, which gave her a washed-out appearance. But her makeup was lovely, and her Scalare diamond earrings by Roberto Coin were EVERYTHING!

On the night of a million black dresses (more on that to come!), Demi Lovato stood out in a strapless Ester Abner number with a train. The glamorous gown, which featured a bustier top and draping at the hips, perfectly accentuated the singer-actress's curves. She wisely channeled Old Hollywood by wearing her extra-long tresses down in loose waves and accessorized with $215K Gismondi 1754 "Diva" collection diamond chandelier earrings.

Kelly Clarkson went glam in an off-the-shoulder black-and-gold Christian Siriano gown with a train. If only her 'do had been worthy of such a dramatic dress! We know the stick-straight thing is in, but an updo really would've looked great here.

The pansies on Pink's Monique Lhuillier gown were gorgeous, so it's a shame they clashed so badly with the salmon hue of the dress. We also took issue with the fact that the singer donned exclusively silver jewelry considering her frock featured gold detailing. (The unique bling on her right hand is pretty rad, though!)

Jenna Dewan Tatum sparkled in a stunning Julien MacDonald halter-style gown with a plunging neckline, a sheer skirt and a thigh-high slit. It's even more breathtaking from the back…

Jenna Dewan Tatum brought sexy back in her Julien MacDonald gown, which featured an open back and a sheer, striped train.

Justin Hartley kept things simple with an all-black ensemble — and was still the best dressed man of the AMAs!

Tracee Ellis Ross stunned in a burgundy long-sleeved sequined Stella McCartney gown with a high neckline and a thigh-high slit. She wisely completed her look with red lipstick and velvety red heels, which coordinated with the lining of her curve-hugging dress. The actress's ensemble looked even better from the side…

Such a pretty pink dress deserves a smile! Lea Michele inexplicably vamped her way down the red carpet in a J. Mendel gown with a pleated skirt and an embellished bustier top with a halter tie at the neck. Perhaps this fun and flirty frock would've been better suited to a less serious star.

Ciara slayed in a long-sleeved Alexandre Vauthier haute couture wrap dress with shoulder pads and a thigh-high slit that perfectly flaunted one incredibly well-toned thigh. We love the way her wetted tresses added to this slick, rock 'n' roll look.

Hailee Steinfeld showed off her versatile sense of style in a chic Mugler suit: a loose-fitting blazer with major shoulder pads over a leather bustier crop-top and slacks. We loved this edgy ensemble on her but were less wild about her messy, slicked-back 'do. An updo really would've allowed those epic shoulder pads to make the statement they so deserved to make!

Nick Cannon wore a white T-shirt and black shorts over black pants with boots, shades, a pink turban and a black leather jacket with the words "freedom," "peace," "love" and "power" emblazoned across it. Let's take a closer look at his equally loud accessories…

It was bad enough that Nick Cannon wore sunglasses at night on the red carpet. Then we got a better look at his shades, which featured rhinestones across a majority of the lenses, ensuring the multi-hyphenate would have limited used of his vision. Good call, man.

Ashlee Simpson paid homage to step-mom Diana Ross (Ashlee is married to the singer's son, actor Evan Ross) with her long-sleeved sequined Christian Siriano gown, which looked like it'd come straight out of the early '70s. It was a little matronly for the 33-year-old singer-actress, but as a piece of tribute-couture, it worked.

Kelly Rowland donned a busy Galia Lahav gown with a thigh-high slit, embroidery along the bodice, criss-cross ties across her décolletage and partially sheer bell sleeves. Unfortunately, it was just WAY too much.

Jessie James Decker flaunted her pregnancy curves in a pink off-the-shoulder midi-length sheath with a thigh-high slit. While she definitely looked pretty in pink, we wish she'd pulled back her hair to show off the neckline of her dress.

Yara Shahidi had a major fashion moment in Prada. The "Grown-ish" star wore a trench coat over a black button-down with a zebra-print collar and gray embroidered shorts. She completed her ensemble with gray knee-high socks and silver platform heels. Whether you loved it or hated it, you had to appreciate that this was a LOOK.

Sabrina Carpenter donned one of our favorite looks of the evening: a multi-color floor-length Missoni coat dress with beige over-the-knee Casadei platform boots.

Erika Jayne wore a black menswear-inspired minidress with hot pink over-the-knee boots for a look that was just SO Erika Jayne.

Garcelle Beauvais also donned a menswear-inspired minidress during the AMAs. Erika Jayne's fit her like a glove, but Garcelle's looked like she'd thrown on a large men's suit jacket and belted it to give her some shape. The actress completed her ensemble with sparkly slouch boots.

Camila Mendes looked lovely in a blush-and-gold halter dress with a plunging neckline. She looked great, but we can't help but feel like the "Riverdale" star missed an opportunity to have a major fashion moment.

Chadwick Boseman looked casually cool in an army-green ensemble, which he wore with clean white kicks for one of the best menswear looks of the evening.

Kat Graham's sense of style can be pretty divisive, and her Ronald van der Kemp look during the AMAs was no different. The singer-actress paired a long-sleeved blouse with a plunging neckline and an extra gathering of fabric on one shoulder with an asymmetrical minidress with a jagged hemline, a lengthy train and black lining. We like both pieces on their own, but such an edgy skirt and pretty, feminine top just don't belong in the same ensemble.

Caleb McLaughlin reminded us why he's one of the best dressed young stars in Hollywood with the paint-spattered 3.1 Phillip Lim suit he wore during the AMAs. The "Stranger Things" star finished his look with matching Converse sneakers.

Bleona Qereti clearly got the memo that the AMAs are all about fun and fearless fashion. The Albanian singer-actress flaunted her figure in a silver top with bell sleeves and an open front, which she wore with matching high-waist briefs. Her top is actually pretty cool and would've looked great with form-fitted black slacks or even matching pants, so it's a shame she resorted to such attention-seeking style tactics. Let's take a closer look…

Upon closer review, it's clear that a WHOLE lot of work went into Bleona Qereti's silver top, which was comprised of sequins and chain link and was held together in the front with a clasp. It's too bad she didn't let the piece stand on its own!

YAAAAS! PatrickStarrr clearly had the best time ever in this lime-green fringe jumpsuit, which he wore with a matching turban. We acknowledge that this look may not be for everyone, but if fashion is all about fun, the makeup artist totally won the AMAs.

Niall Horan disappointed in a plaid three-piece suit, which he mistakenly wore sans tie. It would've been just fine if he'd passed on the vest, but such a formal look requires some form of neckwear.

Like Niall Horan, Patrick Schwarzenegger also sported a stuffy plaid suit. He wore his double-breasted version over a black turtleneck, which gave him a retro vibe that was better suited on a much older star.

Skylar Grey donned a simple black Halston dress with a plunging neckline and a thigh-high slit. It wasn't necessarily our favorite look of the evening, but it's probably the best the typically super-edgy singer has ever looked!

Yikes. Lilly Singh donned an unfortunate fuchsia mess of a one-sleeved pleated dress featuring gathered clumps of fabric on half the bodice and across the opposite hip. Gaps in the fabric were visible around the poorly constructed clumps, which gave the whole ensemble a craft-store-gone-wrong look.

There was something odd about seeing The Chainsmokers all buttoned up. Alex Pall wore a double-breasted plaid suit sans tie, which we didn't especially love, while Andrew Taggart looked less stuffy in a simple black suit — the better of the two ensembles.

Do we really have to say it again? "NO MORE SHEER." Kehlani missed the memo in a sheer Amen confection with strategically placed sequins across the bust and crotch regions. The befuddling frock also featured bizarre silver fringe at irregular intervals.

Madelaine Petsch is one of many women who donned a black dress during the AMAs. Her super-busy Fabiana number featured a feathered bodice, a lacy peplum waist and a partially sheer, asymmetrical skirt.

We're loving the iridescent-couture trend, but we're not sure the Jovani Fashion minidress that Chrishell Stause donned during the AMAs is the way to do it. When it comes to this look, less is definitely more, so the sleeves and high neckline are just a bit much.

Bebe Rexha's sparkly strapless August Getty Atelier dress was nothing to write home about. But it sure did wonders for her enviable figure, making it one of the most impressive looks of the evening.

Julia Michaels also poorly executed a trend we love: the tiered ballgown. The bodice of her Phuong My confection was just a mess of tulle. It also featured a bizarre midriff cutout held closed with a large multi-colored tie. Weird.

Machine Gun Kelly sported an eyesore of a multi-colored suit, which featured bizarre 3D… thingies… on the jacket and oddly cropped pants. Need a closer look?

Maia Mitchell donned a sheer one-sleeved Alberto Audenino jumpsuit comprised of petals of black fabric with a leather corset belt that seemed totally out of place on such a whimsical getup.

Not again! Rachel Platten also wore a sheer black jumpsuit during the AMAs. She looked great in the Thai Nguyen Atelier creation, but we're just SO OVER this trend.

Renee Bargh took a stab at the trench-coat dress trend in an off-the-shoulder army green Monse dress with an asymmetrical hemline. Unfortunately, her look fell flat. 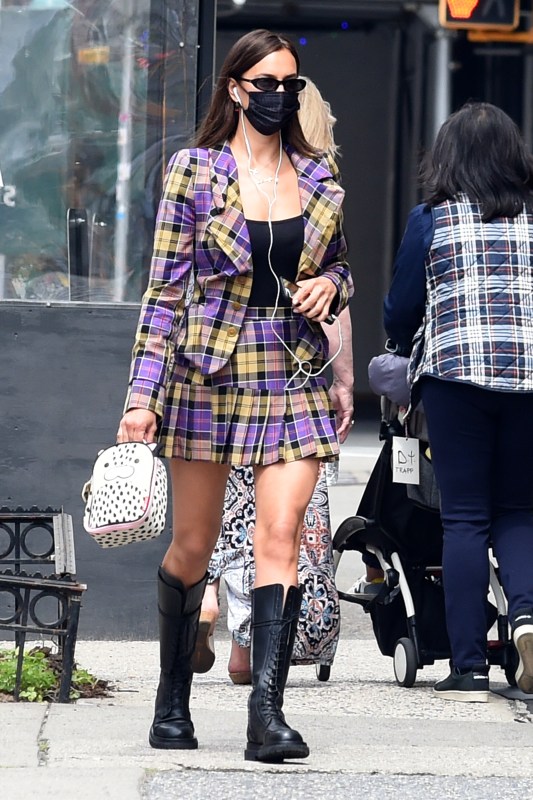 Up Next Good & bad street style