Hollywood's finest lugged their glam red-carpet wear all the way to Spain for the 2018 MTV Europe Music Awards, but not all of their looks made it past fashion security. From the best to the absolute worst and most outlandish, Wonderwall.com rounded up what the stars wore for the big show on Nov. 4, starting with host Hailee Steinfeld. She gifted us with a cool iridescent Armani Prive romper covered in different-size sequins and wrapped with an oversized bow. Keep reading for more style hits and misses from the EMAs!

RELATED: See the stars on the 2018 MTV EMAs red carpet

Some trends were just meant to be left in the '80s! Rompers are totally in these days, but the gaudy floral print, massive asymmetrical shoulder pads and bushel of gathered side fabric on Dua Lipa's 2018 MTV EMAs look were a thing of the past. The "One Kiss" singer's ensemble would have been better suited 30 years ago, though we do appreciate her unique jewelry. See what we mean next…

Dua Lipa played on her asymmetrical shoulder pads with an unbalanced earring design to match. Her single pearl ear jacket was way more on-trend for the current decade.

Red-carpet red seems to be Camila Cabello's favorite color for award shows. We've seen the "Havana" singer in the bright hue on numerous occasions, including this year's Grammys and Billboard Music Awards, which is why we can't help but feel that she played it safe with another fiery dress for the 2018 MTV EMAs — a princess-cut ball gown.

Lindsay Lohan surprised us by looking abnormally normal in a gold pleated Saint Laurent minidress with a ruffled strapless neckline for the 2018 MTV EMAs. We got a glimpse of her usual eclectic side with her choice of earrings though. Get a close-up of her jewelry next…

Lindsay Lohan accessorized with interesting black danglers that looked oddly like elephant tusks. Don't worry PETA, we doubt that they actually are.

Nicki Minaj skipped the red carpet at the 2018 MTV EMAs but made quite the appearance in the winner's room wearing a dramatic masquerade ensemble. The "Taki Taki" rapper wore a sparkling silver corset bodysuit underneath a sheer tulle skirt and accessorized with ornate gold body chains. In true Nicki fashion, she looked like nothing less than the queen of the ball with a dazzling mask in hand.

Evan Ross and Ashlee Simpson Ross didn't quite get the memo that Halloween was last week! The couple's outfits for the 2018 MTV EMAs gave us major Beetlejuice and Lydia vibes. Evan wore a tattered black-and-silver striped ASOS pantsuit glittering with sequins while his wifey chose a bewitching Raisa & Vanessa minidress with shoulder poofs and ruffles down the side. Spooky, to say the least.

The detail work on Halsey's pearl-and-crystal-encrusted dress was exquisite, especially around her plunging neckline. She tied it all together with perfectly paired hoops to match.

Jason Derulo looked fly wearing a structured maroon-and-red coat for the 2018 MTV EMAs. He let the knee-length statement jacket shine with all-black pieces underneath, including his combat boots. Take a closer look at the "Talk Dirty" singer's bling next…

Jason Derulo hardly left a finger unfrosted with a selection of massive diamond and gold rings plus some serious statement bracelets. It's nice to see a dude think out of the box with accessorizing for once.

It's highly probable that Rosalia's 2018 MTV EMAs look was made from a recycled '80s prom queen gown. She wore a pair of shiny pink María Escoté track pants with a coordinating crop top, which were adorned with seriously poofy ruffles at every angle.

There were enough fashion misses to go around when it came to girl group Little Mix at the 2018 MTV EMAs. Starting from left, Leigh-Anne Pinnock's bizarre frock channeled a gladiator of the sun, while Jesy Nelson looked more like business Barbie in a bubble-gum pink pantsuit. Perrie Edwards confused us with random dangling sparklers on her navy trousers and Jade Thirwall's dress made us spin in circles. Her dizzying design included a diamond-print skirt with a sheer polka-dot top featuring feathered sleeves. Sorry, ladies!

Bebe Rexha was a little too decked out in head-to-toe Moschino x H&M for the 2018 MTV EMAs. The "Meant to Be" singer rocked a mini sweater dress made completely from silver sequins and an array of garish chunky gold jewelry. She took it even more over the top with black leather gloves and matching knee-high boots that featured charms spelling out the designer's name. Though Bebe's reflective look was hard to miss, we bet you didn't see this surprising component to her outfit coming, next …

Bebe Rexha had the option of putting up the sequined hood attached to her frock for another element of extravagant flare. Just call her "Little Moschino Riding Hood" from now on.

Sofia Reyes donned a black-and-white minidress with bold red platform heels for the 2018 MTV EMAs. Between the polka dots and excessively spiky tulle bits down the arms, her funky frock reminded us way too much of a frightened pufferfish.

Laura Whitmore put such a cute spin on a classic little black dress for the 2018 MTV EMAs. The model-host jazzed up her velvet minidress, which featured subtle gold lining around her silhouette, with a bold bow around her neck. But our favorite element had to be her headband. Take a better look at the stunning piece next…

Laura Whitmore took it to the next level with a gorgeous headband made from canary yellow stones and sparklers. The statement piece added just enough glitz and glam to her otherwise simple look.

Anne-Marie must really, really like the tan dress she wore for the 2018 MTV EMAs because she wore the exact same one in red just two days prior to the LOS40 Music Awards. To be fair, the skin-tight ruched number looked fabulous on the singer's frame, but the neutral color just drowned her out. 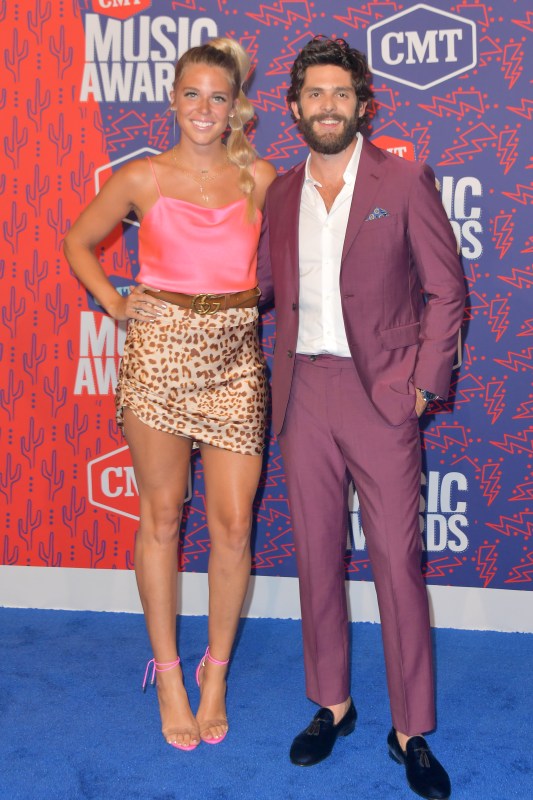