Since they started dating in early 2020, Megan Fox and Machine Gun Kelly have become pros at coordinating outfits without getting too matchy-matchy. "That's something I started with him because he's such a flamboyant dresser. I can't really pull off just the sweatpants and the yoga gear. I have to, like, elevate myself to his level," the "Transformers" alum said of their tendency to dress alike during a July 2021 appearance on "Jimmy Kimmel Live." To mark the release of the rocker's new Hulu documentary, "Machine Gun Kelly's Life in Pink," in June 2022, Wonderwall.com is taking a look back at all the times the pair, who got engaged in January 2022, have coordinated their clothes — on the red carpet and in daily life — starting with these looks… Megan and MGK arrived for the New York City premiere of his "Life in Pink" doc in on-theme pink looks — Megan even swapped her usual dark brown hair for pink-streaked blonde locks to show her support — on June 27, 2022.

During the iHeartRadio Music Awards in Hollywood on May 27, 2021, Megan Fox stunned in a pink Mach & Mach ensemble with silver details: a satiny pink corset top, matching high-waist pants and glittery bow-adorned pumps. Machine Gun Kelly coordinated with the actress by wearing a white-and-silver ensemble: a white jacket, a rhinestone-encrusted white shirt, silver shorts and white boots. He added a pop of color with his white socks, which featured stripes in the same shade of pink as Megan's getup.

Megan Fox and Machine Gun Kelly sported matching blue flannel pieces — a button-down shirt for her and pants for him — during a dinner date at Via Veneto in Santa Monica on April 14, 2021. They also rocked denim — pants for her and a jacket for him — and black boots.

We almost missed it! If you look closely, you'll see that the sheer Mugler dress Megan Fox donned during the MTV Video Music Awards in New York City on Sept. 12, 2021, featured waves of red sequins that perfectly coordinated with Machine Gun Kelly's red beaded Dolce & Gabbana getup. And here we thought there was nothing subtle about these looks!

Machine Gun Kelly and Megan Fox had a matching all-black moment at the launch party for his UN/DN LAQR line in West Hollywood on Dec. 4, 2021. But that's not the only reason why the couple were so in sync that night… They also rocked matching pink nail polish and a chain that connected their pinkie nails. (See it here.)

The lady (and gentleman!) in red. Following the Met Gala in New York City on Sept. 13, 2021, Megan Fox changed into a red one-sleeve micro-mini from the Dundas x Revolve collection before hitting up the afterparty scene. She completed her look with red accessories — strappy sandals and a clutch — plus a bold red lip. Machine Gun Kelly, meanwhile, coordinated with the actress by topping off his otherwise all-black ensemble with an alligator-skin jacket featuring asymmetrical red flower-like details at one shoulder and down both sleeves.

Megan Fox and Machine Gun Kelly coordinated in shades of brown at the UFC 261 event in Jacksonville, Florida, on April 24, 2021. He wore a tan belted jumpsuit while she rocked a long brown coat over a beige bralette and jeans.

Machine Gun Kelly and Megan Fox coordinated in predominantly black ensembles topped off with long black jackets during a dinner date at BOA Steakhouse in Los Angeles on March 5, 2021.

Subtlety was key for Megan Fox (for once!) when she coordinated with beau Machine Gun Kelly by carrying a pink purse during a night out in Los Angeles on Sept. 24, 2020. Her darling Marc Jacobs bag perfectly complemented the pink graffiti design featured in MGK's mostly white getup.

Megan Fox went big for one of her earliest red carpets with Machine Gun Kelly: the Billboard Music Awards in Los Angeles on May 23, 2021. She flaunted her figure in a Mugler halter dress featuring illusion panels along the bodice and a sheer skirt. MGK wisely chose a simple look to keep the attention where it belonged: on Megan! He wore a black suit with a white shirt that he wore unbuttoned to make sure they both showed some skin.

Megan Fox and Machine Gun Kelly have mastered the art of sporting the same color palette to complement each other without dressing too alike. Here's a perfect example! During an outing with his daughter, Casie Colson Baker, in Santa Monica on June 19, 2021, the "Transformers" star paired a beige bralette and trench coat with blue jeans while the rocker also sported blue in the form of acid-wash denim separates.

Megan Fox rocked snakeskin-print Laquan Smith pants and a matching top during an outing with Machine Gun Kelly in New York City on Jan. 30, 2021. She rocked a bold red lip to coordinate with her beau's all-red ensemble.

Megan Fox sported a black top while supporting Machine Gun Kelly, who also rocked black on top, as he performed during the Barstool 500 party in Westfield, Indiana, on May 28, 2021.

His and hers Dr. Martens! Machine Gun Kelly and Megan Fox coordinated footwear during a visit to Six Flags Magic Mountain in Valencia, California, on June 30, 2021. 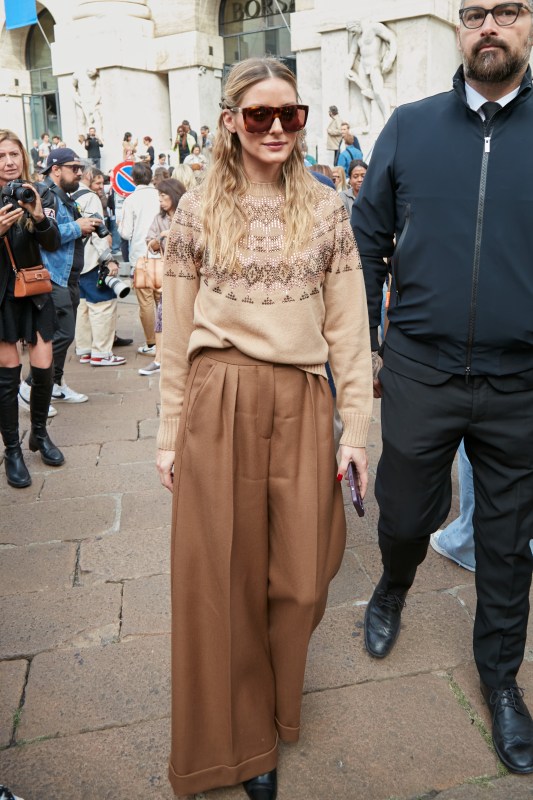 Up Next Fall fashion

As Alicia Silverstone turns 46, find out what the stars of 'Clueless' are up to now!

See which celebrities are marking milestone birthdays in October 2022

Kris Jenner explains how she came up with names for her famous offspring, plus more major revelations from season 2 of 'The Kardashians'

Celebrate 'She's All That' star Rachael Leigh Cook's birthday with a look at our favorite high school rom-coms!