Kacey Musgraves is the best dressed woman in country music! The star has always had a penchant for bold colors and has never shied away from eye-catching looks, so in honor of her 33rd birthday on Aug. 21, 2021, Wonderwall.com is rounding up her stellar sartorial moments. First up, the Giambattista Valli gown that Kacey wore to the 2019 Academy Awards — otherwise known as a work of art. The bubblegum pink confection started with a unique collar feature before giving way to ruffled tulle bordering the sleeves. From there, a fitted bodice featuring a bedazzled bow at the waist fanned out into a fluffy tiered tulle skirt. Gorgeous!

Keep reading for more of Kacey's best style ever…

Even on one of her very first red carpets, Kacey Musgraves dressed to impress. The star donned this sweet white dress with cap sleeves, embroidery and a feathered skirt at the Academy of Country Music Awards in 2013. She finished off the look with neutral platform heels and gold bangles.

We can pinpoint the moment the world took notice of Kacey Musgraves' impeccable style potential: When she hit the red carpet at the 2018 Country Music Association Awards. The talented beauty arrived in head-to-toe custom Versace and quickly ditched her jacket to show off a sheer blouse underneath with a keyhole cutout and Swarovski crystal fringe embellishments that paid homage to traditional Western style.

Kacey Musgraves played with color (and won!) during a November 2019 outing in New York City. She wore an epic neon green Dorothee Schumacher jacket over a flirty floral-print Markarian dress, matching her top layer to the hint of green in her frock. She completed her look with color-coordinated baby blue Jimmy Choo pumps.

Kacey Musgraves' 2019 Grammys gown wasn't only gorgeous — it gave a subtle nod to the cover of "Golden Hour," which won the coveted album of the year prize at the end of the night. Yep, the second we saw her pale blush Valentino Haute Couture gown, we noticed that the neckline of her confection mimicked the fan shape on her album cover with its ethereal fanned-out tulle. Aside from loving that sweet allusion, we also adored the gown's A-line silhouette and how a berry-colored belt tied it together.

Kacey Musgraves gave a nod to Old Hollywood glam at the 2015 CMA Awards as she arrived in this slinky dark teal gown with a daringly low-cut neckline. The sleek halter-style dress fit her like a glove and paired well with her dramatic red lip, curls and the serious bling she sported on her right hand.

Kacey Musgraves donned this lilac Christian Siriano gown way back in 2016 at the CMA Awards, proving that she's continued to stay true to her unique style. The pretty strapless gown with its tiered layers of tulle is reminiscent of quite a few of her more recent red carpet selections!

Leave it to Kacey Musgraves to make an LBD anything but boring. She wore this stellar Calvin Klein selection featuring embellished buttons at the neckline to Variety's Power of Women event in New York City in April 2019. Her shoe choice really elevated this look — the country crooner opted for sheer socks with her peep-toe platform heels.

Kacey Musgraves donned this dreamy rainbow suit by Christian Cowan for the 2019 Academy of Country Music Awards, paying homage to her hit single "Rainbow" in the process. We absolutely adored this lovely getup, the way she opted to go sans undershirt to make a style statement and those delicately pleated sleeves.

Big Bird — but make it fashion! Kacey Musgraves had a major high-fashion moment in a canary yellow sequined and feathered Valentino confection during the 2019 CMA Awards. Fashion critics were divided over this busy look, but whether you loved it or hated it, you can't deny the country cutie made a statement!

Kacey Musgraves adhered perfectly to the 2019 Met Gala's theme of "Camp: Notes on Fashion" by channeling a campy icon: Barbie! The country music star rocked this neon pink Moschino bomber jacket-turned-gown with a thigh-high slit on fashion's biggest night and even traded in her typically dark locks for a Barbie-blonde wig. Her accessories took this look to the next level — matching sunglasses and a blow-dryer purse really brought home her Barbie-themed look. All that was missing was the doll's box!

As we've learned, Kacey Musgraves loves to reference her music in her sartorial selections. She did just that during her Lollapalooza set in August 2019, paying homage to her song "Butterflies" by donning a David Koma LBD featuring jeweled embellishments in the shape of a torso-spanning butterfly. So cute!

Back in 2013, Kacey Musgraves was still making a name for herself in the country world, and her ensemble at the 2013 CMT Music Awards helped her shine. The star sported this sparkly minidress with three-quarter-length sleeves with strappy neutral heels for her first time at the annual country music award show.

A bedazzled rainbow jumpsuit? Only Kacey Musgraves could pull off this look! The singer-songwriter sported this wildly colorful one-piece ensemble while performing in New York City in January 2019.

Kacey Musgraves went with this bronze Versace creation for the Vanity Fair Oscar Party in February 2019. The slinky frock featured a cowl neck and gold hardware detailing along the straps, but it was that bold metallic hue that really stood out.

Kacey Musgraves chose a hippie-chic getup for her performance during the Austin City Limits Music Festival in October 2019. She donned a darling button-down long-sleeved floral-print Staud minidress with matching boots for an adorable ensemble that transported us back decades — but in the best way possible!

You can't go wrong in head-to-toe pale pink Gucci! Kacey Musgraves selected this semi-sheer pastel pink blouse with a black ribbon tied at the collar, high-waisted icy pink trousers and silver pointy-toe heels, which she topped with a blush-toned furry coat, for the Pre-Grammy Gala and Salute to Industry Icons presented by Clive Davis and the Recording Academy in New York City in January 2018.

Kacey Musgraves loves any chance to channel her music with her clothes — like the way she's rocked ROYGBIV hues in homage to her song "Rainbow," or her subtle fan allusion to album cover artwork on the red carpet at the 2019 Grammy Awards. So this vintage Versace frock covered in butterflies was the perfect selection to wear on "Jimmy Kimmel Live" in October 2018 as it was a perfect wink to her song "Butterflies."

Kacey Musgraves really knows how to liven up an LBD! She donned a unique David Koma peplum-waist mini featuring two layers of structured ruffles during the 2019 iHeartRadio Music Awards.

Gorgeous in gold! Kacey Musgraves selected this show-stopping gold gown by J. Mendel for the MusiCares Person of the Year Gala in Los Angeles in February 2019 and made sure to pose accordingly on the red carpet. We loved the bow detail at the bottom of the dress's plunging neckline and the delicate pleating in that bold metallic fabric.

Kacey Musgraves selected this floral-covered minidress by Zhivago for the BMI Country Awards in Nashville in November 2018. From the plunging neckline and sheer sleeves to the the belt detail and the delicate pink-and-yellow floral embroidery, we adored everything about this chic look. Those thin strappy sandals and messy topknot were the perfect picks to complete this red carpet look.

All that glitters isn't always gold… sometimes it's silver! Back in November 2016, Kacey Musgraves was tapped to perform during the CMA Country Christmas show. She hit the stage wearing this over-the-top-fabulous mermaid-style frock dotted with studs and sequins that ended in a feathered skirt.

Neon yellow, tan and brown aren't colors you'd automatically assume pair well together, but look how well Kacey Musgraves rocked this unexpected assortment of hues! Her halter-style crop top and pleated skirt combo was the perfect pick for the Academy of Country Music Awards Cumulus/Westwood One Radio Remotes in Las Vegas in April 2019.

It was winter whites for Kacey Musgraves at the New York City premiere of her holiday special in November 2019. She was a vision in white in David Koma separates: a long-sleeved midriff-baring top with structured shoulders and a matching miniskirt, both featuring crystal fringe at the hem.

Kacey Musgraves stood out at The Hollywood Reporter and Jimmy Choo's Power Stylists Dinner in Beverly Hills in March 2019. She opted for this dramatic long-sleeved, floor-length sheer dress with floral appliqués paired with black heels and a bright red lip.

It was hot pink and plenty of fringe for Kacey Musgraves at the GLAAD Media Awards in New York City in May 2014. She rocked a sleek low ponytail, and when it came to shoes, she opted for neutral strappy heels — which seemed to be her go-to early in her career.

Almost five years later, Kacey Musgraves opted for a fringe-covered minidress in another eye-catching shade while performing at Coachella in April 2019. This time, the country songstress opted for a fiery orange hue with a chunky silver belt.

Kacey Musgraves donned a bold yellow Versace design for her performance at the 2019 iHeartRadio Music Awards. This vibrant one-sleeved gown also featured a thigh-high slit and some of the fashion house's signature safety pins at the waist, which perfectly complemented her gold heels.

Who doesn't love a good ruffle? We adored the massive ruffle detail on this off-the-shoulder pink minidress that Kacey Musgraves wore to her new exhibit, "Kacey Musgraves: All of the Colors," at the Country Music Hall of Fame and Museum in Nashville in July 2019. Making things even sweeter? The way she paired the pastel pink frock with pale yellow pumps.

It was another gold moment for Kacey Musgraves during the 2019 CMA Awards: The country talent sported a curving-hugging Cushnie jumpsuit with a halter neckline in one of her go-to hues while posing backstage during the annual award show.

We love a big bow! And Kacey Musgraves really delivered while performing in Nashville in October 2019. She donned tie-dye Area crushed velvet separates — a midriff-baring sleeveless top and a miniskirt with a massive bow at one hip and rhinestones along the hem. 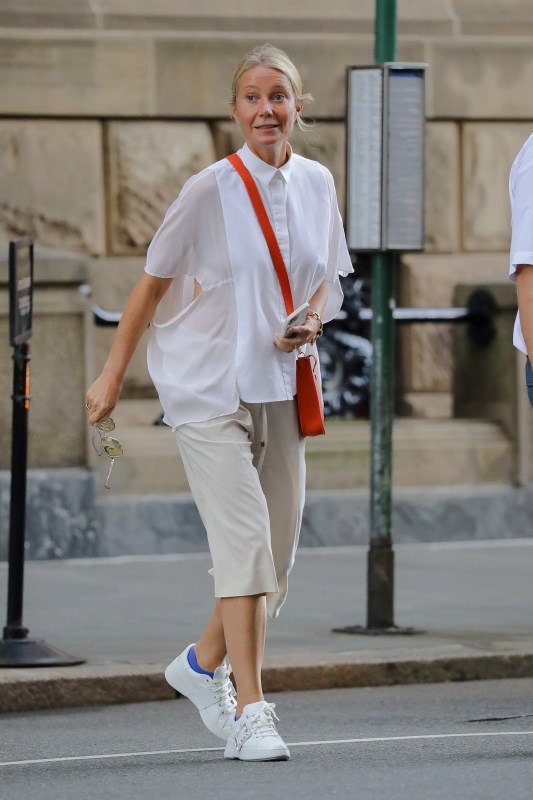