Frumpsuit: Did you know that in between fulfilling her duties as a self-promoting reality show starlet, Kim Kardashian also conducts important research work? Her field of expertise: the study of hotness. This week's experiment: Is a knockout still a knockout when her waist, legs and feet are obliterated by a belted skantsuit (part pants, part skirt, part jumpsuit) from Elvis' later, little-known cross-dressing gladiator phase? Kim's scientific conclusion: She is, but only if she's blessed with traffic-stopping yabbos and at least 63 percent of those yabbos are kept on conspicuous display.

Sheer Badness: Can you guess who's trying to hide beneath that helmet of buttery blond hair? Think: Who would be clueless enough to wear a see-through shirt on a grocery run in Los Angeles and then act put out that the paparazzi would dare take her picture? Here's a hint: She recently said of her detractors, "[Bleep] the haters," before opining, "I am who I am. I can't pretend to be somebody who makes $25,000 a year." Yes, it is indeed Gwyneth Paltrow, who appears to be embracing the "nourish the inner aspect" motto of her delightfully mockable GOOP lifestyle initiative by showing us the inner aspect of her rack. The ostensibly private actress has a habit of baring her foundation garments, which gives us pause about her forthcoming clothing line, because we prefer that our satiny underthings stay, you know, under things. There's also our nagging fear that the collection is just another step towards Paltrow's plot for world domination, which she's apparently planning to achieve one colon cleanse, glute-firming cardio routine and hibiscus-infused Majorcan salt-flavored recipe at a time.

Harem Flare 'Em: Remember how Cher from "Clueless" insisted on taking photos of all her outfits because she felt mirrors were unreliable? Turns out she was onto something. Jennifer Lopez probably checked and rechecked her ensemble from every angle (or at the very least ordered her assistant to do it) before facing photographers at the Tokyo airport. Crisp white motorcycle jacket? Check. On-trend slouchy boots? Got 'em. Reasonably priced shoulder bag from the purse designer she's in town to promote? Casually draped on arm (if never to be seen again). Steel-blue skirt that gathers as it flatters? Oh, crap! J.Lo's reflection inspection failed to reveal the ugly truth: When you combine movement with clingy material that looks like it was accidentally tucked into your waistband, you'll end up in that most unsettling of places — Aladdin's pants.

Ankles Away: Katie Holmes slouches out of a dance studio, looking deep in thought. But what, exactly, is on Mrs. Tom Cruise's mind? Let's listen in, shall we? "Are those photographers laughing at me? I distinctly heard chortling. Darn it, that's the last time I take style advice from Tom. I knew this would happen when he was all, like, 'Go on, wear my sweatpants today. You'll start a trend, like boyfriend jeans, only comfier. It'll be amazing and will prove to the world just how simpatico we are. Trust me.' Man, my calves are really cold."

Chain Link Dense: "Always remove," fashion legend Coco Chanel famously advised. "Never add." Paula Abdul has taken those words to heart at the Kids' Choice Awards, but only after she filtered them through the Paula Abdul Reality Translator, which reshapes the world in her own Bizarro image — up is down, black is white and Simon Cowell is happy-go-lucky. In the oft-befuddled "American Idol" judge's mind, her metal-and-mesh nightmare fits Coco's rule to a T: Necklaces (and whatever bicycle chains are lying around) must be draped across your body by the dozen; suspenders must hang uselessly at your sides; fingerless black fishnet gloves must be worn outside of Madonna's "Lucky Star" video from 1983; and birds that accidentally fly into the side of your head must be made into kicky accessories. Perhaps one day the Paula Abdul Reality Translator will be available on the Home Shopping Network, sold alongside her jewelry line, which, by her version of our Earth's logic, she's doing a bang-up job of promoting by wearing every single piece at all times.

Twin Cheeks: The transition from child star to leading lady is undeniably tough. For every Jodie Foster, there's a multitude of Lindsay Lohans; for every Ron Howard, a glut of Gary Colemans. And so, Amanda Bynes, we put it to you: Do you really think running around town with your perky tuchis hanging out of your piping hot pants will make Hollywood's powers-that-be forget your cutie-pie Nickelodeon past or your starring role in the so-cheesy-it's-almost-enjoyable-especially-with-Colin-Firth-classing-up-the-joint "What a Girl Wants"? Trust us, if a public display of keister cleavage (or, to use the technical term, cheek leak) were the path to a successful career, then frequent flasher Paris Hilton would be snatching big-screen roles from Reese Witherspoon.

Pete the Odds: With his 30th birthday looming and son Bronx Mowgli likely facing years of intense therapy over name-induced anger issues, Pete Wentz has decided it's time to grow up, and what better place to do that than at the Kids' Choice Awards. Prior to his personal growth spurt, the Fall Out Boy bassist might have turned up at the ceremony kitted out in deliberately ridiculous duds. Now, Pete has put away childish things and is taking style cues from the always-dapper George Clooney, gussying up his dressiest jean jacket with a fancy black bow tie and matching pocket square. He ups the formal factor even more with his shoes, sporting the sneaker equivalent of eveningwear — a Nike style not yet on the market. Still not convinced that Wentz is growing as a person, metaphorically speaking? Just look at his peepers: Pete has managed to kick his guyliner addiction, and we're certain that with Ashlee's support, he'll soon be able overcome his twin dependencies on the flat iron and suctioned-on skinny jeans.

She's All Hat: Like an After School Special produced by the Style Network, Kate Walsh teaches us all a valuable lesson about the hidden dangers of accessories. Hats may seem like innocent fun when you're trying them on in the store, but out in the real world, they can quickly turn homicidal, able to kill a well put-together outfit in the blink of an eye (no wonder Kate's blond pal is casting a suspicious sidelong glance at the temperamental topper). Not even the "Private Practice" star's adorable shoes can withstand her ventilated white fedora's sartorial rampage, which is likely fueled by its fury over missing both the early bird special and bingo night with Gladys and the girls.

Sea Legs: It's the most divisive issue facing our nation today, other than the bitter schism between dog people and cat people. Is John Mayer a clever jokester or an irritating chucklehead? Our theory: It's a little from column A and a little from column B. To kick off his annual "Mayercraft Carrier" cruise to Mexico, the crooner-cum-Mankini enthusiast slipped into a pint-sized sailor suit that answers the never-asked question, "What if Gopher and cruise director Julie McCoy had spawned after an illicit liaison on the Love Boat's Lido Deck?" On the one hand, we admire Mayer's commitment to finding the funny for his fans (those upper thigh-skimming short-shorts are comic gold, people). On the other, unless he's belting out, "Love, exciting and new, come aboard, we're expecting you," he just kind of looks like an extra from "Reno 911." But whatever side of the Mayer fence you fall, there's one point that's indisputable: He's got legs for days, a likely byproduct of his fickle romance with the exceptionally toned Jennifer Aniston.

Breast Side Story: The world is Paris Hilton's stage, and when she steps out in a suicidally plunging, twee-to-the-nth-degree hot pink frock with boyfriend Doug Reinhardt on her arm, you just know there's a big production number coming …

Doug: Honey, you always feel pretty, but do you think you might have gone overboard with the pink and the pleats and that weird headband thingie?

Paris: I feel pretty, and witty, and gay!

Doug: Wait, what? You told me those rumors weren't true!

Paris: I feel charming. Oh, so charming. It's alarming how charming I feel!

Doug: Speaking of alarming, are those Troll Doll heads hanging from your shoulders?

Doug: Babe, would you stop staring at your reflection and give me an answer vis-à-vis the fluffy epaulettes?

Paris: I feel like running and dancing for joy. For I'm loved by a pretty wonderful boy!

Doug: Yes, I am wonderful. I bought you a $10,000 puppy. I called you "my Angel Princess" — in public. Heck, I even hinted that I wanted you to bear my children. But come on, you're 28. Enough with the Disco Barbie routine already. And seriously, are those Troll Dolls?

I Know Who Kilt Me: Before we begin, it's necessary to point out that Ed Westwick is feeling the breeze in new places for a good cause: a kilt-centric benefit for New York's Tartan Week (yes, there really is such a thing). But that defense will only take the "Gossip Girl" star so far. When he realized he'd be strutting down the catwalk in this plaid-tastrophe, the actor should have pitched a Blair Waldorf-style hissy fit and made a beeline back to the Upper East Side. Or perhaps he should have put himself in his dandyish alter ego Chuck Bass' very expensive bespoke shoes and sneeringly demanded — in this order — sleeves, socks, some extra-firm styling gel and a razor (because a clean, close shave of his chest and legs could only help this situation). Instead, Westwick became fashion roadkill, although at least he was self-aware enough to take steps to dull the checkered pain. "I'm going to get smashed after doing this," he reportedly told a buddy. Oh, and for those who are wondering what was under Ed's skirt (hey, no judgment), he was styling black boxer briefs. You're welcome.

Doggone It: When you're London's leading "it girl," being fashion-forward is a job requirement. For Pixie Geldof, that means hitting the red carpet in couture so fresh, so chic and so modern that it still smells faintly of Snausages, the favorite treat of the Old English Sheepdog who selflessly sacrificed its fuzzy and possibly flea-bitten coat in the name of trendiness. 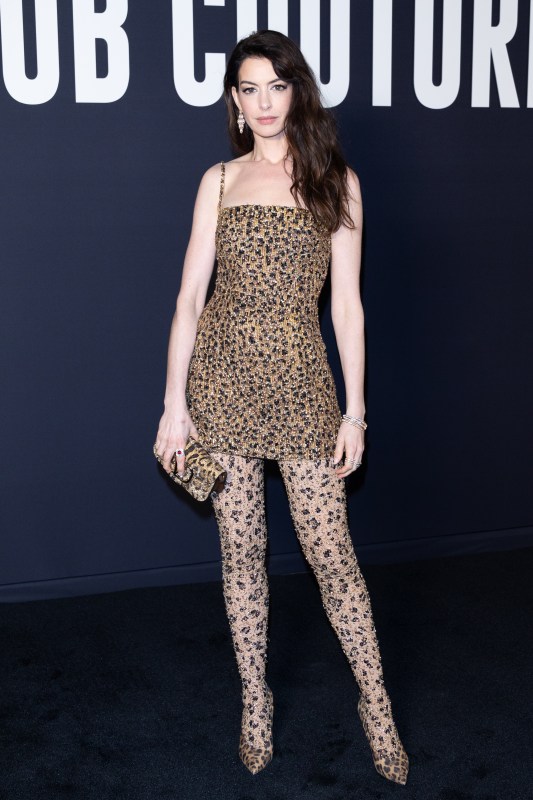 Up Next A+ for Anne