Whether Jessica Chastain hits the red carpet or the street, she manages to turn heads with her classic, colorful style. In honor of her new movie "The Zookeeper's Wife" opening in theaters on March 31, 2017, we're taking a look back at her most stylish moments. Let's start off with Wonderwall's favorite J.C. fashion pick — this beautiful blue creation that Jessica wore to the 2017 Golden Globes. The powder blue Prada gown featured intricate floral detailing down the left side and paired perfectly with her dramatic diamond drop necklace by Piaget — and the decision to slick her hair back and keep the focus on her ensemble was totally correct. Keep reading to see even more of Jessica's best ensembles!

Gold Givenchy! Jessica Chastain sparkled on the 2015 Met Gala red carpet. The star donned this shimmering halter-style gown, which molded to her body perfectly, and rocked her red hair in glam waves.

Never underestimate the glamour of a great black dress. Jessica Chastain channeled Old Hollywood with this strapless black Givenchy A-line gown at an amfAR event in 2014. We loved the way she wore her hair loose and down and added bling with that Tesiro necklace.

RELATED: Fashion hits and misses from the 2017 awards season

For the 17th annual Critics' Choice Movie Awards, Jessica opted for a simple pink halter dress by Balenciaga. She balanced out the volume of the bodice by pulling her hair back into a taut bun.

Looking bold and bright in Armani Prive, Jessica Chastain stunned on the red carpet during the 2016 Cannes Film Festival. The strapless gown, which featured beautiful bustier detailing and a dramatic train, provided the perfect color pop and her Piaget diamond necklace added just the right amount of bling.

We don't often seen Jessica Chastain in a printed dress, so her unique look at the 2016 CFDA Awards was a departure from her usual style. The actress donned this printed high-low black Prabal Gurung strapless gown, which featured a silver feather design and showed off her strappy black heels.

Now that's a movie star! At the 2013 Academy Awards, Jessica Chastain made her fashion mark in this nude, sparkling Armani gown. The red lip and the homage to Old Hollywood with the big waves solidified this look as one of our favorites ever from the celeb.

Jessica Chastain wore this sky blue Calvin Klein halter dress when she accepted the 2013 Golden Globe for best actress in a drama for her performance in "Zero Dark Thirty." The redheaded beauty completed her look with a berry lip and subtle jewels.

A vision in black and gold! During the 84th Annual Academy Awards, Jessica Chastain dazzled on the red carpet in a strapless black Alexander McQueen gown with complex gold embellishments.

Jessica Chastain stuck to one of her favorite designers — Elie Saab — during the 2014 Cannes Film Festival. We loved the vibrant purple hue on the redheaded star and the way the one-shouldered gown draped and featured a wispy train. Adding to the glam? Her hair's voluptuous waves!

Jessica Chastain sparkled in this semi-sheer Marios Schwab dress at the 66th Annual Tony Awards. And if you look real close, you'll notice all the delicate embellishments on the garment. Très chic.

By now you may have noticed that Jessica Chastain has an affinity for Elie Saab. During the 68th Venice Film Festival, she wore a nude lace cap-sleeve gown by the designer to a screening of "Wilde Salomé." She topped off her look with a soft classic chignon and a berry lip.

Jessica Chastain looked fabulous in floral at the 2015 Empire Awards. The actress donned this black-and-white long-sleeved dress by Oscar de la Renta for the occasion and paired the glamorous gown with a simple top knot.

Jessica Chastain opted for an ethereal look at the 2014 Governors Awards. The star donned an ivory layered Nina Ricci gown straight from the designer's runway and paired it perfectly with metallic Nicholas Kirkwood sandals.

Jessica Chastain proved that she isn't afraid of a little pattern sometimes. She donned this black-and-white Dolce & Gabbana dress during a photocall for "Madagascar 3" at the 65th Annual Cannes Film Festival. To offset the tricky-to-wear pattern featuring lace detail, she paired simple black Jimmy Choo sandals with her retro-inspired getup.

This gown is simple in design, and the form-fitting nature of the garment flattered Jessica Chastain's petite frame. She topped off her look with minimal jewelry and a side-part wave during the 2012 Screen Actors Guild Awards.

Flawless! Jessica Chastain glimmered in this black and green Altuzarra gown at the premiere of "The Huntsman: Winter's War" in 2016. The gown featured plenty of sparkle and geometric detailing — an unconventional combination — and we loved the unexpected look on the star.

Just like her red carpet attire, her street style is a hit! Jessica Chastain stepped out in New York City wearing a cherry red coat and black strappy platform heels on Jan. 7, 2013. We just love her effortless side part and long loose waves. Don't you?

Pretty in pink! During a photocall for "Zero Dark Thirty" in 2012, Jessica Chastain softened up her look in a floral-print sheath by Preen. She completed her look with nude pointy Christian Louboutin pumps.

We're in love with the intricate construction of this buttery yellow gown that Jessica Chastain donned for a screening of "The Tree of Life" during the 64th annual Cannes Film Festival. The bodice of Jessica's dress is absolutely divine.

The vivacious redhead wowed in this magenta Oscar de la Renta curve-hugging gown at the world premiere of "The Help" in 2011. Jessica Chastain wrapped up her look with a simple 'do and turquoise drop earrings.

Pairing cherry red pumps with a neon green sleeveless sheath might be an unconventional choice, but it worked for Jessica Chastain when she was snapped at "The Late Show With David Letterman" in 2012. 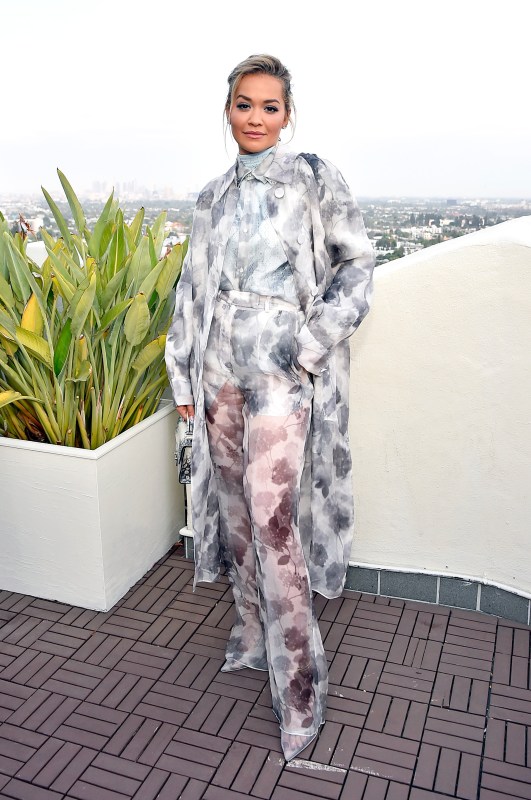