When it comes to award shows, who wears what is sometimes just as important as who wins what. Maybe that's why stars like Chrissy Teigen took multiple stabs at topping the best-dressed list, switching up their ensembles midway through the evening of the 2017 Golden Globe Awards. Wonderwall.com rounded up 10 stars who found time for a quick wardrobe change before hitting the party scene, starting with John Legend's missus, who started the day in a gold Marchesa gown. Keep reading to see what she and other stars changed into…

RELATED: The best and worst looks from the 2017 Golden Globes

Chrissy Teigen changed into a black J. Mendel dress with a ruffled skirt and a plunging neckline for the afterparties.

Kristin Cavallari sparkled in Idan Cohen during the Golden Globes.

She must really love lilac! Naomi Campbell changed into a sparkly gown with silk waist and shoulder details.

Janelle Monae wore a black-and-white Armani Prive dress with a sparkly bodice and a polka-dot high-low skirt during the Golden Globes.

Janelle Monae stuck with black and white, of course! She changed into striped wide-leg pants and a strapless top, which she wore with a black choker.

Tracee Ellis Ross changed into a modest gown that kept her figure under wraps — and matched her Golden Globe!

Louise Roe was a vision in white in Monique Lhuillier during the Golden Globes.

Louise Roe changed into a slinky black halter dress for the afterparties.

Naomie Harris sparkled in a strapless Armani Couture gown with a dangerously low-cut neckline during the Golden Globes.

Naomie Harris changed into another Armani Couture confection: a strapless gown with a sequined black bodice and a full skirt with vertical stripes and a swirl print.

Issa Rae changed into a wide-leg jumpsuit with a plunging neckline.

Lola Kirke changed into a beige halter dress with a thigh-high slit. 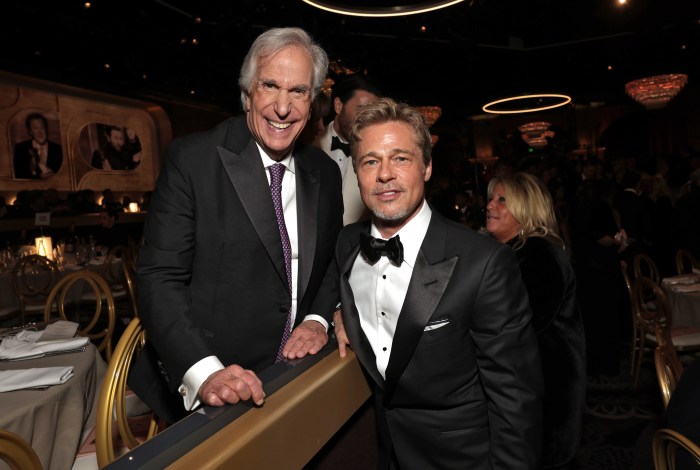