Jeremy Renner was airlifted to a Reno, Nevada, hospital after being run over by a 14,000-pound snow plow on New Year's Day. The Marvel star was using a Snowcat to clear a road near his home where one of his vehicles, which was being driven by a relative, was stuck. After doing so, he got out of the plow to speak to his family member — and the Snowcat began rolling. Jeremy was crushed while attempting to get back into the driver's seat. A 911 emergency log revealed that the Oscar-nominated star was bleeding from his head, having trouble breathing and had been "completely crushed" by the plow. He was in critical condition upon being transported. On Jan. 3, Jeremy posted a selfie from the intensive care unit of the hospital. "Thank you all for your kind words," he captioned a photo revealing his injured face. "I'm too messed up now to type. But I send love to you all." On Jan. 5, he was bathed for the first time since the incident and remained in the ICU.

On Jan. 2, Buffalo Bills safety Damar Hamlin, 24, collapsed on the field in front of millions of viewers seconds after he tackled Cincinnati Bengals wide receiver Tee Higgins, leaving NFL players and fans supporting both teams in shock. The second-year player went into cardiac arrest on the field and medical personnel performed CPR to restore his heartbeat. After the terrifying incident, many celebrities and athletes tweeted their support for Damar. Kerry Washington said Damar was in her "prayers." Ciara tweeted, "Praying for Hamlin. Jesus please let everything be ok." With Damar sedated in a Cincinnati hospital, a bevy of famous folks donated to a GoFundMe page he'd previously used to raise money to purchase toys for children affected by the pandemic. Donations came from Tom Brady, Russell Wilson and other NFL heavyweights. Singer Luke Bryan chipped in $5,000. Pro wrestling Hall of Famer Chris Jericho donated $10,000, but that wasn't necessarily what he intended to do. According to reports, Chris first gave $5,000, but he misspelled his name in the donation list as "Chrus." He then corrected his name and added another $5,000. The fund has now topped $7.5 million. On Jan. 5, doctors revealed that Damar was showing significant signs of improvement and was conscious again.

Celebrities on both sides of the aisle couldn't take their eyes off the mess in Washington, D.C. this week. For several days, Republicans in the House of Representatives fought over who should take on the role of House Speaker, with no one elected despite multiple votes — something that annoyed even many conservative public voices. Meghan McCain called the situation a "circus." Elon Musk backed Kevin McCarthy and his followers blasted him for it. Country music singer and vocal conservative John Rich tweeted, "One of the main probs Conservatives have with the Repub establishment, is they SPEND TONS of money in primaries choosing who they want, instead of who voters want. McCarthy/McConnell/McDaniel all do this, and McCarthy won't agree to stop it. This is part of the hold up right now." Meanwhile, liberal celebrities mocked the chaos on Capitol Hill.

T.J. Holmes' estranged wife, Marilee Fiebig, broke her silence about his alleged affair with "GMA3" co-host Amy Robach. "During the holiday season and in light of the challenging times, Marilee's sole focus has remained on the overall best interest of her 9-year-old daughter [Sabine]," divorce attorney Stephanie Lehman told DailyMail.com on Jan. 4 — the week after T.J. filed to divorce his wife of 13 years. In the statement, the attorney said the divorce should move forward "privately, expeditiously and as amicably as possible." Since T.J. and Amy's romance came to light, they haven't hidden their feelings for each other and have repeatedly been photographed sharing PDA. The public nature of the relationship is not sitting well with Marilee. "We continue to be disappointed by T.J's lack of discretion, respect and sensitivity toward Marilee and the party's daughter," the statement said.

Aaron Taylor-Johnson could soon have the numbers 007 next to his name. As the calendar flipped, Puck journalist Matthew Belloni confirmed that Aaron was a favorite to play the next James Bond after Daniel Craig finished in the role. The British actor — who's starred in everything from "Kick-A**," "Nocturnal Animals" and "Godzilla" to "Avengers: Age of Ultron," "Tenet" and "Bullet Train" — was first mentioned as a Bond possibility in November. "While Taylor-Johnson fits the bill — great actor, British, fits the younger direction [producers] the Broccolis want to go, accomplished but not particularly famous — he's about to be a much bigger star," Puck's newsletter said, putting special emphasis on Aaron's rising fame. "If Sony's 'Spider-Man' spin-off 'Kraven the Hunter' or Universal's Ryan Gosling two-hander 'The Fall Guy' works, Taylor-Johnson might end up, ironically, too famous to take on Bond."

Ashley Olsen is a married woman: The former child star-turned-fashion designer wed her longtime beau, artist Louis Eisner, in a hush-hush ceremony a few days before the New Year. About "50 or so" people attended the wedding at a private home in Los Angeles's luxe Bel Air enclave, Page Six reported on Jan. 4. The fiercely private couple have been dating since 2017. 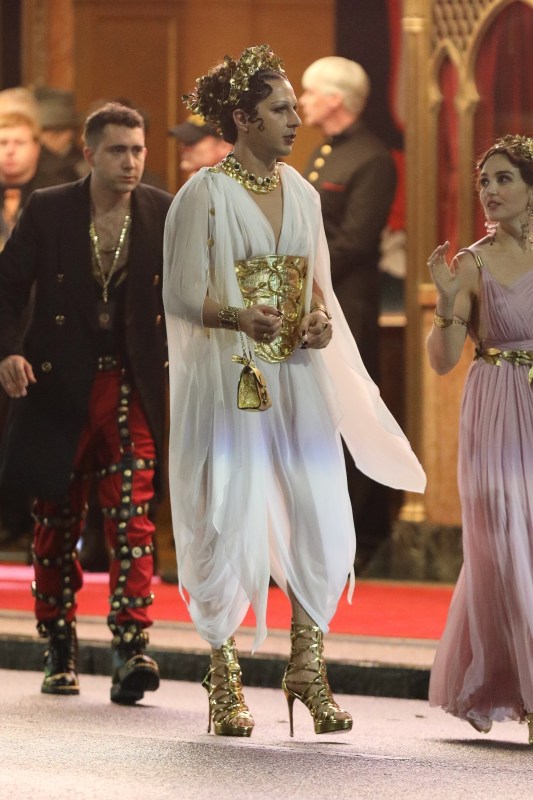