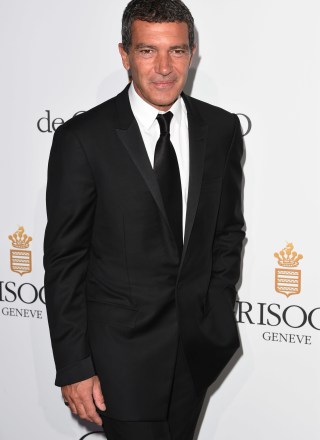 Antonio Banderas studied drama before moving to Madrid to take the stage. The Hispanic hunk quickly hooked up with director Pedro Almodóvar who gave him small part in 1982's "Laberinto de pasiones" and he returned the favor by acting exclusively in the auteur's films until 1986. Still unable to speak English at the time, he fought his way phonetically through his first bona fide U.S. film, 1992's Mambo Kings." The following year he broke through to mainstream audiences by portraying Tom Hanks' lover in "Philadelphia" and continued his hot streak with "Interview With The Vampire," "Evita" (proving he can also sing and dance), "The Mask of Zorro," "Spy Kids," and "Once Upon A Time In Mexico." In 1995, the then-married Banderas met Melanie Griffith on the set of "Two Much." After a whirlwind romance and a quickie divorce from Ana Leza, whom he had wed in 1987, the new couple married in May 1996 and had daughter Stella in September of the same year. His distinctive accented purr was such a hit in the "Shrek" franchise that his Puss In Boots got his own spinoff.  He also voices a bee in Nasonex commercials, owns part of a Spanish winery called Anta Banderas and directed "Crazy In Alabama."