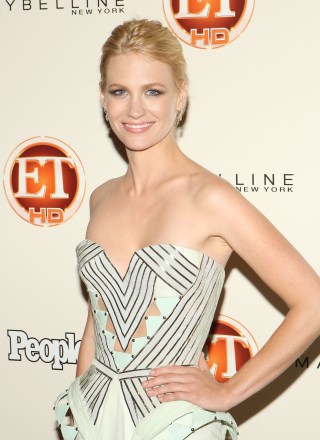 Approached by a scout while she was shopping, the sporty teen races to complete high school early so she can ship out to New York to pursue modeling in 1996. In 1998, she met fellow Abercrombie & Fitch mannequin Ashton Kutcher, with whom she had a three-year relationship. Unchallenged by posing, she explored acting and by 2003 she was the new it girl, appearing in "Anger Management," "American Wedding" and "Love Actually." In 2007, she auditioned unsuccessfully for Peggy on Mad Men, but creator Matt Weiner enlarged the Betty role with her in mind. Betty earned her two Sag awards (as part of the ensemble), two Golden Globe nominations and a lead actress Emmy nod. Her rise was slightly interrupted in June 2010 when she allegedly lost control of her car while being pursued by paparazzi, hit several parked cars, and left the scene to call the police. Jones, who dated Josh Groban from 2003 to 2006 and Jason Sudeikis in 2010, decided to give single motherhood a go. Son Xander was born in September 2011 just after her turn in "X-Men: First Class" hit screens. Most recently, she has been linked to Noah Miller, the director of her upcoming Western "Sweetwater."