A lot can change in a decade, but much of the show-stopping style displayed at Emmy Awards past remains timeless. Ahead of TV's biggest night on Sept. 22, 2019, Wonderwall.com is going 10 years back in time to reveal what celebs wore at the 2009 Emmys, starting with Drew Barrymore. Nominated that year for her performance on the HBO miniseries "Grey Gardens," she dazzled in a strapless dusty rose Monique Lhuillier ballgown with textured tulle atop a full ballerina skirt. Keep reading for more fashion flashbacks from the 2009 Emmy Awards…

Blake Lively might not have been nominated at the 2009 Emmys, but she stole the show in a sexy Versace number. The "Gossip Girl" star looked like a total siren on the red carpet wearing the fiery red gown with a plunging crystal-encrusted neckline and airy wrap-front design that showed off her gams.

RELATED: The best photos from the Emmy Awards over the years

Olivia Wilde went ice-queen glam in a pastel lace Marchesa gown at the 2009 Emmys, where her TV medical drama, "House," was up for best series. Her asymmetrical pale blue number featured a lace applique bodice with sheer nude paneling and a tiered tulle mermaid skirt.

Tulle, tulle and more tulle! Mila Kunis went absolutely crazy for the fine mesh fabric at the 2009 Emmys. The "That '70s Show" star wore a scarlet Monique Lhuillier cocktail dress with a sweetheart neckline and layers upon layers of tulle that created the jagged look of her tiered ankle-length skirt.

January Jones shut down the red carpet at the 2009 Emmys in a fierce and fabulous white Versace number. Her unique gown featured a geometric corset bodice with clean lines and metallic cut-outs as well as a structured hip to offset the ethereal design of her sheer gathered skirt. It's a good thing she dressed to impress because her '60s-set period drama, "Mad Men," won big that year.

Kim Kardashian West gave us all the goddess feels at the 2009 Emmys in a white one-shoulder Ina Soltani gown with a billowing long bell sleeve. The "Keeping Up With the Kardashians" star accessorized with oversized gold hoop earrings and a sparkling Swarovski clutch.

Christina Hendricks knows just how to find the perfect form-fitting attire to show off her gorgeous figure without being overly revealing. Take the curve-hugging L'Wren Scott gown she wore at the 2009 Emmys, for example. The navy-and-black number with ruffled cap sleeves, a low scoop neckline and a lace-embellished train fit her body like a glove.

Ginnifer Goodwin gave the 2009 Emmys red carpet a much-needed pop of color. The star, whose HBO drama "Big Love" was nominated that year, looked bold and bright in a purple Yves Saint Laurent gown with a plunging sweetheart neckline and a layered asymmetrical skirt.

Leighton Meester also took a Greek-goddess approach in terms of style at the 2009 Emmys. The "Gossip Girl" star donned a white toga-inspired Bottega Veneta gown with knotted shoulders and accessorized with gold cuff bracelets for each wrist.

Rose Byrne sparkled all the way down the red carpet in a crystal-embellished Valentino gown at the 2009 Emmys. The shining star, nominated that year for her supporting performance on the FX drama "Damages," looked radiant in the nude tulle number with a full princess skirt.

Jenna Fischer made our jaws drop in a glamorous black satin Reem Acra gown at the 2009 Emmys (a far cry from the drab business attire she wore on her NBC comedy series, "The Office"). The timeless ensemble featured a bejeweled sweetheart neckline and a cinched waist tied with a strip of velvet fabric.

The red Michael Kors gown Debra Messing wore to the 2009 Emmys didn't blend in with the color of the red carpet. The "Will & Grace" star's one-shoulder number rather stood out with dazzling Swarovski crystals embroidered throughout.

What's black and white and chic all over? Chloe Sevigny in a polka-dot Isaac Mizrahi gown at the 2009 Emmys! The "Big Love" star's draped one-shoulder dress featured gathered sheer fabric on one hip accented by a vintage gold brooch.

Pregnancy never looked so good! Heidi Klum dressed up her baby bump in a black strapless Marchesa gown at the 2009 Emmys (she was carrying daughter Lou, with then-husband Seal, at the time). Instead of trying to hide her bump, the nominated "Project Runway" host opted for a sleek fit that hugged her curves and was offset by crystal embroidery on the bodice and train.

Sandra Oh likewise donned a beaded Marchesa number at the 2009 Emmys (she was nominated that year for her supporting performance on the ABC medical drama "Grey's Anatomy"). Her strapless gold silhouette featured intricate beadwork throughout and came together with a woven rope belt loosely tied around her waist.

In 2009, Kyra Sedgwick was nominated for an EMmy for her work as a tough deputy chief on TNT's "The Closer." But she traded in her police gear for a girly bubblegum pink L'Wren Scott gown on the red carpet that year. Her longline number was trimmed with floral fuchsia crystals and featured a gathered ruffled decal on one shoulder.

Mariska Hargitay likewise strayed from her law-enforcement lieutenant look on NBC's "Law & Order: Special Victims Unit" and got all gussied up for the 2009 Emmys (she was nominated for outstanding lead actress that year). She wore a glittering silver Carolina Herrera gown with a bold statement necklace by Fred Leighton.

Alyson Hannigan opted for a classic black gown to present at the 2009 Emmys. The "How I Met Your Mother" star embodied understated elegance in a strapless Vera Wang dress with asymmetrical layers making up the full mermaid skirt.

Kate Walsh looked (literally) statuesque in a draped J. Mendel gown at the 2009 Emmys. The "Private Practice" star's strapless gray dress featured a bandeau-style top with layers of gathered fabric draped down throughout the straight skirt.

It's hard to tell if comedian Sarah Silverman was trying to be funny with her bizarre outfit choice at the 2009 Emmys, but she definitely gave us a laugh! Nominated that year for Comedy Central's "The Sarah Silverman Program," she wore a strapless royal blue gown with an outlandish amount of excess fabric on either hip.

Hayden Panettiere looked red-hot at the 2009 Emmys in a bright one-shoulder J. Mendel gown with subtle asymmetrical ruffles. The "Heroes" actress topped off her fiery look with pops of gold jewelry and a glittering Judith Leiber clutch.

Julia Louis-Dreyfus chose a flattering jewel-tone hue for her 2009 Emmy's ensemble. Nominated that year for her leading role on CBS's "The New Adventures of Old Christine," she wore a strapless dark teal Vera Wang gown with a contrasting black belt and uniquely cross-woven fabric along the bodice.

Jennifer Carpenter chose an uber-glamorous Zuhair Murad gown for the 2009 Emmys. The "Dexter" actress channeled Old Hollywood in a cream one-shoulder number with a decorative floral accent and black crystals dripping down the silhouette.

Jennifer Love Hewitt might have thought she was presenting at prom rather than the 2009 Emmys. The "Ghost Whisperer" star wore a strapless pale yellow gown with an empire waist and crystal accents that we think would've been better suited for a dance in the high school gymnasium.

Marcia Gay Harden slayed the red carpet at the 2009 Emmys in a beaded Badgley Mischka gown. Nominated for her role inthe CBS TV movie "The Courageous Heart of Irena Sendler" that year, she wowed in a pink ombre number cinched at the waist with a thick burgundy belt. 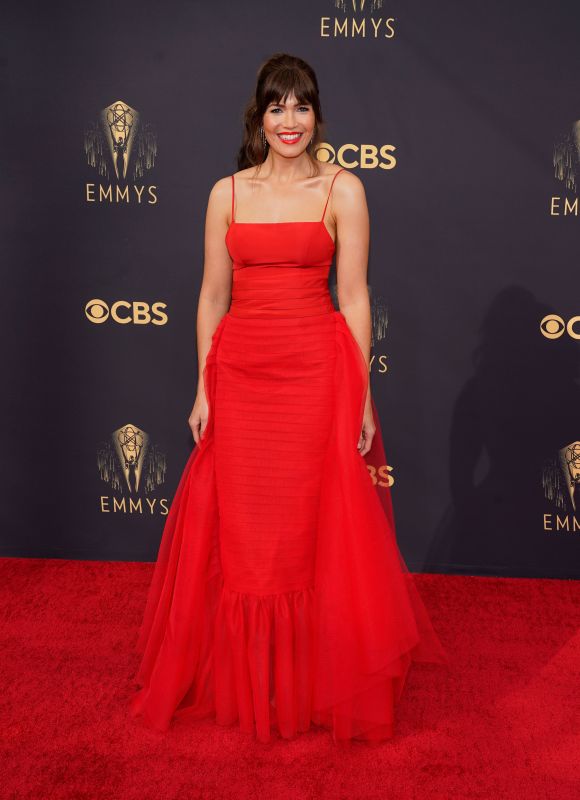 Up Next Emmys red carpet