There's a first time for everything and attending the Emmys is no exception! Some of Hollywood's biggest names were once newbies on the guest list for television's biggest night. Take "Friends" co-stars Jennifer Aniston and Matthew Perry for example. They took their first stroll down Emmys lane when their sitcom was nominated for outstanding comedy series in 1995. Jen went on to win a golden statue for outstanding lead actress in 2002. The same year, Matthew was also nominated for outstanding lead actor, though he didn't win. With the 73rd Annual Emmy Awards set to air on Sept. 19, 2021, Wonderwall.com is taking a look at more stars at their very first Emmys…

Two-time Emmy winner Sarah Jessica Parker — who took home gold for her work on "Sex and the City" — attended her first Emmys ceremony in 1999.

While Jennifer Aniston had already been to the Emmys, her boyfriend hadn't. In 1999, she brought then-love Brad Pitt to his first Emmys ceremony. It wasn't until 2014 that he won an Emmy of his own for executive producing the TV movie "The Normal Heart."

Mariska Hargitay's success on the long-running series "Law & Order: Special Victims Unit" has made her an Emmys pro. But before accruing multiple nominations and a win for her work as Detective Olivia Benson on the drama series, she ditched her cop gear for a bright green gown at her first Emmys in 2004.

Jason Bateman has racked up multiple nominations for outstanding lead actor for his work on the drama series "Ozark" — and he won his first Emmy for directing the hit show — but he was just a plus-one the first time he went to the Emmys. He accompanied sister Justine Bateman to the award show in 1987 when she was nominated for her supporting role on "Family Ties."

Sofia Vergara looked like a real winner in a sparkling Carolina Herrera number when she made her Emmys debut in 2010, the same year her show "Modern Family" won outstanding comedy series.

Tina Fey not only took her first steps on the Emmys red carpet in 2002 but also won her first Emmy that year. That night, she earned the prize for outstanding writing for her work on the sketch-comedy show "Saturday Night Live."

Coming off the heels of a Golden Globe win for her hit show "Felicity," Keri Russell attended the Emmys for the first time in 1999 without even being nominated. She still hasn't won an Emmy, but she earned multiple nominations during her time on the FX drama "The Americans."

Rashida Jones was lucky enough to go to the Emmys with her actress mother, Peggy Lipton, for the first time in 1990. Rashida is now an Emmy-nominated producer: She scored a nod for exceptional merit documentary filmmaking for her work on the 2015 Netflix doc "Hot Girls Wanted."

In 1998, "Dawson's Creek" premiered on the WB. Later that year, one of the show's breakout stars, Katie Holmes, attended her first Emmys telecast.

Back in 1999, Michelle Williams was in attendance at the Primetime Emmy Awards thanks to her breakout role on "Dawson's Creek." Twenty years later in 2019, she scored her very first Emmy nomination, for best lead actress in a limited series or movie, for her work on "Fosse/Verdon" — and won!

Halle Berry dazzled in lavender and lace when she attended the Emmys for the first time as a presenter in 1998. She didn't take home a television trophy of her own until 2000, when she won for outstanding lead actress in the TV film "Introducing Dorothy Dandridge."

Alex Borstein — whose first appearance on the Emmys red carpet happened in 2009 — took home not one but two trophies in 2018: one for best supporting actress in a comedy series for her work on "The Marvelous Mrs. Maisel," and one for best character voice-over performance for her work on "Family Guy." In 2019, she again won for her performance on "The Marvelous Mrs. Maisel."

"Game of Thrones" hunk Kit Harington attended his first Primetime Emmys red carpet in 2011. He wouldn't pick up a nomination until 2016 (for best supporting actor in a drama series) for his work as Jon Snow on the hit HBO show. In 2019, he scored a best lead actor nod for playing the same character.

Emilia Clarke made her first Emmys appearance in 2012 and picked up her first nomination the following year (for best supporting actress in a drama series for her work on "Game of Thrones"). In 2019, she was up for best lead actress for her performance as Daenerys Targaryen on the same show.

Viola Davis has scored five Emmy nods for best lead actress in a drama series for her work on "How To Get Away With Murder" and won the prize in 2015. Her first time at the award show was in 2014 — the year her series premiered on ABC.

Connie Britton — whose resume includes big TV series like "Friday Night Lights," "American Horror Story" and "Nashville" — has been nominated for multiple Emmys. But before she became a household name, Connie went to the Emmys for the first time in 1997 — as then-soap star Nathan Fillion's date.

Allison Janney looked a lot like the golden trophy she won at her first Emmys in 2000. She took home the award for outstanding supporting actress for her work on the drama series "The West Wing" that year and the next, followed by another two wins for outstanding lead actress on the same series. She later won three more for her work on "Mom" and "Masters of Sex."

Back in 2009, Blake Lively was ruling screens as Serena van der Woodsen on "Gossip Girl." That year, she also made her very first Primetime Emmys appearance as a presenter (alongside co-star Leighton Meester).

Sandra Oh's first Emmys experience dates back to 2005 when she was nominated the first of five times for outstanding supporting actress for her work on the ABC medical drama "Grey's Anatomy." In 2018, she moved up the ranks with an outstanding lead actress nomination for her performance on the thrilling BBC series "Killing Eve."

Ahead of the premiere of "Scandal," Kerry Washington made her red-hot Emmys debut in 2011. She must have left quite the impression because she was nominated for outstanding lead actress for her work on the drama two years in a row after that.

Who could blame Jimmy Fallon for looking like a giddy kid in a candy store at his first Emmys back in 2002?! There to support "Saturday Night Live," he could hardly wipe the smile off of his face while posing for pictures on the red carpet with date Tara Subkoff.

When Milo Ventimiglia walked his first Primetime Emmys red carpet, he was best known for his work on "Gilmore Girls." In more recent years, he's become known for scoring best lead actor noms for his work on the drama series "This Is Us."

A nomination for outstanding supporting actress for her work in the television film "RKO 281" was the catalyst for Melanie Griffith's first trip to the Emmys in 2000. And she just so happened to bring along her then-husband, Antonio Banderas, who was also a first-time attendee that year. He was later nominated himself in 2004 for his work in "And Starring Pancho Villa As Himself" and in 2018 for his performance in "Genius: Picasso."

Amy Poehler was on the "Saturday Night Live" circuit when she first attended the Emmys in 2006. But she didn't win an award for the sketch comedy show until 2016, when she took home the prize for outstanding guest actress in a comedy series. She's also scored more than a handful of nominations for her work on the satiric sitcom "Parks and Recreation."

As a nominee for outstanding lead actress on the drama series "The X-Files," Gillian Anderson went to her first Emmys in 1996. She didn't actually win the award until she was nominated again the following year, but at least her hair was on-point.

Christina Applegate went to her first Emmys in 1989 to support her ensemble cast on the sitcom "Married… with Children." She ended up winning a trophy of her own in 2003 for a funny guest-role performance on the sitcom "Friends."

Liev Schreiber also included his mom, Heather Schreiber, in his first Emmys experience back in 2000. So cute! The "Ray Donovan" star has yet to win an Emmy despite being nominated on multiple occasions.

These days, Julia Louis-Dreyfus has an impressive number of Emmy nominations — and wins! — but that wasn't the case when she made her debut at the award show as a new actress on "Seinfeld" in 1992.

Bill Hader's most recent Emmy win came in 2019 for his performance on the dark comedy "Barry." His first time at the show? That was back in 2012 when he was up for best supporting actor in a comedy series for his work on "Saturday Night Live."

The first of six nominations for outstanding supporting actress on the comedy series "Friends" is what brought Lisa Kudrow to the Emmys for the first time in 1995. After winning in 1998, she racked up eight more nominations for her work including as an actress on "The Comeback" and as a producer on the reality show "Who Do You Think You Are?"

Julie Bowen showed up to the Emmys for the first time years before making it big on "Modern Family." In 2007, she came to support her "Boston Legal" co-star James Spader, who was up for outstanding lead actor in a drama series.

Patricia Heaton was a nominee — for best lead actress in a comedy series for her work on "Everybody Loves Raymond" — the first time she ever attended the Emmys, which happened in 1999.

William H. Macy and wife Felicity Huffman made their first appearance at the Emmys in 2003. That year, Bill took home two awards — for writing and acting in the television movie "Door to Door." The couple have been back many times since.

Debra Messing didn't win an Emmy for outstanding lead actress for her work on comedy series "Will & Grace" until 2006, but her first time at the big show dates back to 1999.

Strike a pose! Tyra Banks attended her very first Primetime Emmys back in 2006.

The same year her hit show "Grey's Anatomy" debuted, Ellen Pompeo attended her first ever Emmys ceremony! The star was on hand that year for the 2005 awards, where she presented with onscreen beau Patrick Dempsey.

Over a year after his hit NBC show "The Office" debuted, Steve Carell attended his very first Emmy ceremony! The star arrived with his wife Nancy Carell at the 58th Annual Primetime Emmy Awards in 2006, and later that night the show took home the outstanding comedy series award.

Millie Bobby Brown attended her very first Primetime Emmy ceremony back in 2016, fresh off the success of "Stranger Things." She was just 12 at the time.

Though she's a titan of television now, back in 2006 Mindy Kaling was new to the business and attending her very first Emmys. The star wore this checkered and strapless design at the 2006 ceremony, where the show she starred on and wrote for — "The Office" — won outstanding comedy series.

Year before Patrick Dempsey would sign on to his most famous TV role on "Grey's Anatomy" he was on hand for the 2001 Primetime Emmy Awards. He brought along wife Jillian on the big night, where he was nominated for outstanding guest actor in a drama series after his sting on "Once and Again." 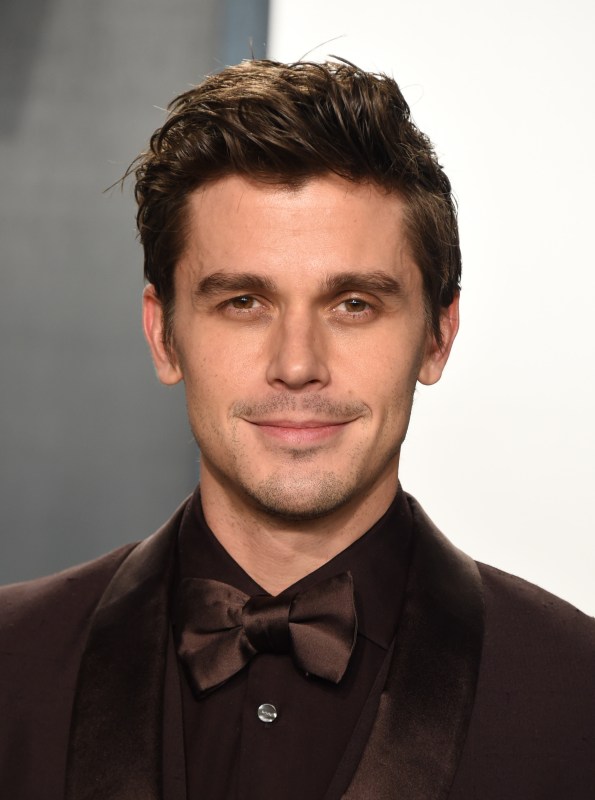