On Sept. 22, 2019, Julia Louis-Dreyfus could make history at the 71st Annual Primetime Emmy Awards. The star already set a new record, becoming the actor with the most wins for a single role for her work on "Veep" after taking home the lead comedy award six times in a row. If she takes home the outstanding lead actress in a comedy series prize again in 2019, she'll set a record for most overall acting wins, beating Cloris Leachman, whom she tied in 2017. Ahead of this potentially legendary night, Wonderwall.com is checking out the other stars who have the most Emmy nominations and/or wins under their belt. Keep reading for more…

RELATED: The most controversial Emmy moments over the years

This picture of Tina Fey says it all — not only has this hilariously smart writer, producer and actress received 44 Emmy nominations, but she's taken home an impressive nine awards. Her first Emmy nod came in 2001 for outstanding writing on "Saturday Night Live" — which she ended up winning in 2002. Since then, Tina has slayed the Emmys over and over again. In 2018, Tina was once again on the list of nominees — twice! Once for her work executive producing and composing lyrics for the hit Netflix original series "Unbreakable Kimmy Schmidt" and the other for her guest appearance on "Saturday Night Live."

Heidi Klum might not have won the most Emmys, but she's received an incredible 22 nominations for her work on the hit Bravo series "Project Runway." In 2013, Heidi took home her first Emmy.

RELATED: The best Emmy photos from over the years

Comedian, actor, writer and "Late Night with Seth Meyers" host Seth Meyers has been nominated for an Emmy 21 times during his career. Seth has only won one statuette (for his part in writing Justin Timberlake's opening monologue for an episode of "Saturday Night Live" in 2011).

Larry David has so many titles — including actor, writer, playwright and co-creator of the hit comedy series "Seinfeld" — that it's impossible to list them all. What we can mention are the incredible 25 Emmy nominations the "Curb Your Enthusiasm" genius has received over the course of his 37-year career for executive producing, acting, hosting, writing and more. In 1993, Larry won two Emmys for his work behind the scenes on "Seinfeld."

Stephen Colbert is one of our favorites and it's no surprise that this notoriously funny actor, writer and host has hit the jackpot when it comes to Emmy Awards and nominations. The host of "The Late Show with Stephen Colbert" has amassed an impressive 35 nominations and has nine wins, with his most recent Emmys coming in 2014 for both writing and executive producing his hit former show, "The Colbert Report." In 2017, Stephen hosted the Primetime Emmy Awards!

Actress Allison Janney doesn't have the highest number of Emmy nominations (she's at 14), but she's taken home an astounding seven awards, making her nomination-to-win ratio one of the best amongst her peers. In 2018, she was up for best lead actress in a comedy for her work on CBS's "Mom." In 2014 and 2015, she also won the Emmy for best supporting actress for her performance on the same show.

Historically, the Primetime Emmys lack diversity. From 1966 to 2016, there were 1,006 best actor/actress nominees of color for a comedy or drama, with only 48 actually winning the statuette. When you do the math, that's less than five percent — a paltry number in comparison to how many vibrant, talented lead actors and actresses of color have worked on the small screen. Although "Grey's Anatomy" and "S.W.A.T." actress, dancer and choreographer Debbie Allen (who's snagged an amazing 18 Emmy nominations during her more than four decades in Hollywood) never won despite multiple nominations for best lead actress, she did manage to take home three Emmys. In 1982, 1983 and 1991, Debbie was awarded the prize for outstanding choreography for her work on the hit series "Fame" and "Motown 30: What's Goin' On!"

When we think of Seth MacFarlane, undoubtedly, his hit shows "Family Guy" and "American Dad" come to mind. But this actor, producer, writer and voiceover artist extraordinaire is a man of many talents. Not only has he earned 20 Emmy nominations over the years, but he's managed to take home three awards — in 2000 and 2016 for his incredible range of voice work on "Family Guy" and in 2002 for his lyric-writing genius on the theme song for the same show.

Of the 25 Emmy nominations Lily Tomlin has received throughout her career, we're most excited about her 2017 and 2018 nods for best lead actress in a comedy for her performance on the Netflix original series "Grace and Frankie." Her newest fans might not know that Lily's been a staple in Hollywood since 1969, transitioning from well-known comedian and movie star throughout the '70s, '80s and '90s to beloved TV star in the early 2000s. Throughout her career, Lily's won six Emmy awards, including one for her 2013 voice-over work narrating the documentary "An Apology to Elephants" and her very first Emmy in 1974 for her comedy special "Lily."

For 14 years, Johnny Carson ruled the late-night TV world on "The Tonight Show," earning him the nickname "The King of Late Night." Over the course of his career, Johnny earned 15 Emmy nominations and four wins, including for outstanding variety show in 1992 and outstanding program achievement in 1977, '78 and '79. In 1987, Johnny joined the select group of performers inducted into the Emmy Hall of Fame.

If you've watched literally anything Alfre Woodard has appeared in, then you know she gives good TV. For close to 40 years, Alfre has dazzled viewers while collecting 17 Emmy nominations along the way. Her four Emmy wins include a 2003 award for best guest actress in a drama for her work on "Private Practice" and an incredible 1997 statuette for best lead actress in a miniseries or special for her performance in the acclaimed HBO film "Miss Evers' Boys."

Did you know that funnylady Cloris Leachman has been making on-screen magic since 1947? What's even more amazing is that Cloris is still slaying in Hollywood, with several projects in the works (including voicing a character on "Elena of Avalor" this year). The 92-year-old actress has racked up an impressive 22 Emmy nominations along the way, taking home eight awards. Her most recent statuette came in 2006 for her guest role on the hit comedy series "Malcolm in the Middle." In 2011, the star was honored by the TV Academy with an induction into the Emmy Hall of Fame.

You might not be surprised to learn that actor, director and comedian Chris Rock has a total of 19 Emmy nominations under his belt, but you'll likely be shocked to learn that his most recent nod in 2016 was for his directorial work on "Amy Schumer: Live at the Apollo." Chris has four statuettes to his name, including a 2009 win for writing on his comedy special "Chris Rock: Kill the Messenger" and a 1999 award (also for writing) for his HBO late-night comedy, "The Chris Rock Show."

Another legend to make our list is 96-year-old writer, actor and producer Carl Reiner, who got his start on the small screen in 1948. Over the course of his awe-inspiring career, this notorious funnyman has been nominated 15 times and won nine awards — making his win-to-nomination ratio higher than even Allison Janney's! In 1999, Carl was inducted into the Emmy Hall of Fame for his incredible history of excellence in TV. And just like Cloris Leachman, Carl is still kicking it in Tinseltown, recently appearing in 2018's "Ocean's 8."

Lucille Ball was (and always will be) a bright light on the large and small screens. Over her 53-year career in Hollywood, she was nominated for 14 Emmys and won five. Her first Emmy was for best comedienne in 1953, followed by best actress on "I Love Lucy" in 1956 and again in '67 and '68 for "The Lucy Show." Lucille was one of the first select group of performers to be inducted into the Emmy Hall of Fame in 1984. In 1989 (the same year she passed away), Lucille was posthumously given the Governors Award by the Board of Governors of the Academy of Television Arts & Sciences for her contributions as both a performer and producer. Two years after she died, the Emmys added Lucille's show, "I Love Lucy," to its Hall of Fame.

You might know Kelsey Grammer from his days on both "Cheers" and "Frasier," but this 17-time Emmy-nominated star has a surprising side gig that earned him his most recent statuette. Of his five Emmy wins, four are for best lead actor in a comedy for his work on "Frasier" — but the other, which he won in 2006, was for his voice work as Sideshow Bob on "The Simpsons" (a character he's voiced since 1990).

If you thought Michael J. Fox's best acting years were in the '80s, then you haven't been paying attention to your TV screen. Michael's enjoyed 18 Emmy nominations over his 44 years in Hollywood and five times, he went home with a statuette. While his first three Emmys were for his work on the hit series "Family Ties," he also won in 2000 for best lead actor on "Spin City" and again in 2009 for his guest-starring performance on "Rescue Me." In 2013, '15 and '16, Michael was nominated for best guest actor for his work on "The Good Wife."

Over the years, Betty White has grown to become America's favorite senior citizen. This funnylady has been a staple in Hollywood since 1945 (holy cow!) and, rightly so, has received 21 Emmy nods and five wins for her incredible body of work. Her awards include the 1986 Emmy for best lead actress in a comedy for her work on "Golden Girls" and the Emmy for best guest actress in a comedy for her work hosting "Saturday Night Live" in 2010. She's also one of the elite few who belong to the Emmy Hall of Fame, thanks to her induction in 1995.

When it comes to Emmy nominations, no one has it on lock like David Letterman. The former late-night talk show host has accrued a jaw-dropping 50 nods since his TV debut in 1976. Of his five actual wins, four were for script writing for "Late Night with David Letterman" and one in 1994 was for an overall outstanding show.

Actor, producer and director Bryan Cranston might be best known for his days on "Breaking Bad," but one peek at his Hollywood resume shows he's got a whole lot more going for him than a single hit series. Although he truly got his start on screen in the 1980s, his first of 14 Emmy nominations didn't come until 2002, when he received a nod for his supporting role on "Malcolm in the Middle." Bryan has gone on to win six Emmys since then, most recently in 2014 when he took home two statuettes — one for producing and one for his work as the lead actor on "Breaking Bad."

In January 2017, the world lost Mary Tyler Moore, one of the greatest actresses to ever grace the small screen. Before she passed, Mary had accumulated an incredible 15 Emmy nominations and seven wins, including her 1986 induction into the Emmy Hall of Fame. Her last Emmy came in 1993 for her supporting role on the Lifetime special "Stolen Babies." 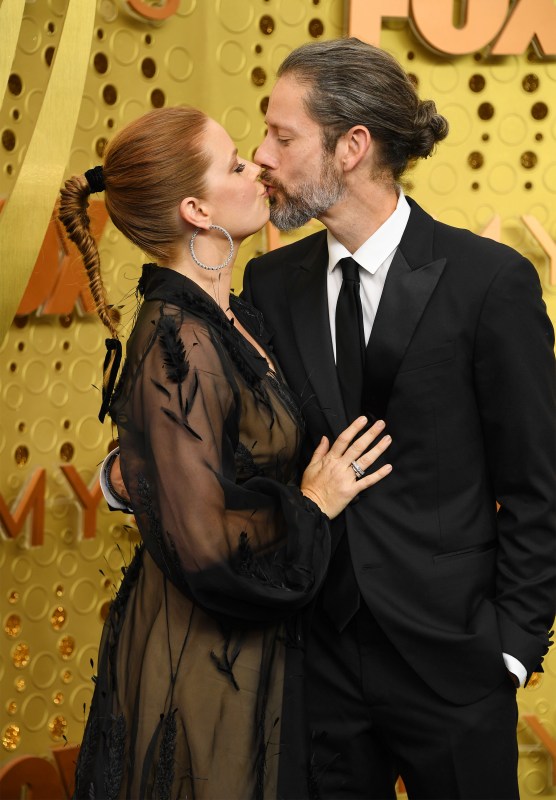 Up Next Dynamic Duos