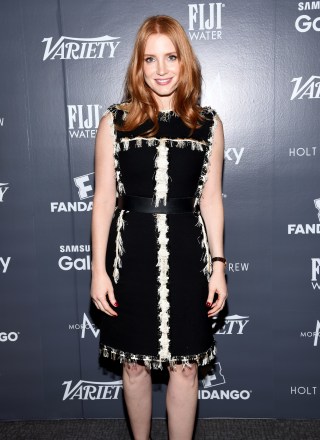 Jessica Chastain is probably the best modern example of how it usually takes years to become an overnight sensation. The fireman and a vegan chef's daughter was inspired to pursue acting after catching a production of "Joseph And The Amazing Technicolor Dreamcoat" with her grandma. She trained at Juilliard thanks to a scholarship funded by Robin Williams and roomed with Michelle Williams when both appeared in a summer stock play. After deciding to use her mom's maiden name to avoid being confused with fellow ginger Bryce Dallas Howard, she spent years toiling on TV in shows like "ER" and "Law & Order," failing to get anything besides weekly victims, patients and the like. In 2006, she got a big break when Al Pacino cast her in a LA stage version of "Salome" and then recommended her to Terrence Malick. He made her Brad Pitt's wife in "Tree Of Life," which was shot in 2008 but it didn't premiere until Cannes 2011, a year which saw her star in six films. One was "The Help," which earned her an Oscar nod and a place on the cover of Vanity Fair's annual Hollywood issue. A Broadway run of "The Heiress" and "Zero Dark Thirty," for which she won a Golden Globe and received another Oscar nomination, secured her place on the A list. Chastain is dating a fashion industry executive Gian Luca Passi de Preposulo,