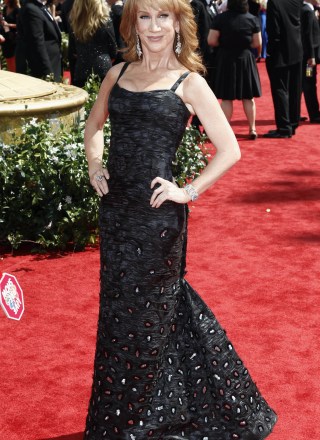 The Emmy-winning comedian was teased as a girl for her ginger locks and freckles, but it is she that got the last laugh as she became a famous funny girl, talk show host, Grammy nominee, reality star and best-selling author. She made a career out of mocking celebrities and the silly things they do as well as poking fun at herself. She moved to LA after some high school theater and a few junior college classes to study acting at the Lee Strasberg Institute and join The Groundlings troupe. Her one-woman show encouraged HBO to give her a comedy special in 1995 and the following year she was cast as the sidekick on Suddenly Susan. She rarely passes up an opportunity (Hollywood Squares, Eminem music video, and Celebrity Mole. Her reality show, My Life On The D-List, debuted in 2005 and aired for six seasons on Bravo. She found herself in hot water when she accepted one her two Emmys for the show by saying, "Suck It Jesus!" Behind the scenes, things haven't always been a barrel of monkeys. She divorced her husband of five years, Matthew Moline, when she discovered he'd been skimming money from her accounts. The staunch GLBT rights activist rebounded with Apple co-founder Steve Wozniak, Bristol Palin baby daddy Levi Johnston, and marketing exec Randy Bick who is 18 years her junior.