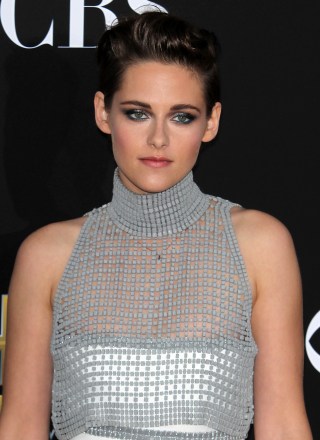 Discovered while starring in a grade school Christmas play, Kristen Stewart quickly became an in-demand child star after doing the prerequisite Disney TV film (1999's The Thirteenth Year). The daughter of a stage manager and a scriptwriter starred opposite respected adults like Jodie Foster (2002's Panic Room), Dennis Quaid (2003's Cold Creek Manor), Diane Lane (2005's Fierce People), and Catherine Keener (2007's Into The Wild) before becoming the leading lady in one of the most lucrative film franchises, The Twilight Saga, of all time from 2008 to 2012. Through those epics, she also became costar Robert Pattinson's leading lady although they didn't go public with the relationship until New Year's 2010. Their coupling hit the rocks when news of her infidelity with her married Snow White and the Huntsman director Rupert Sanders broke in July 2012. The duo reunited by October but called it quits again in May 2013 after he failed to show for a birthday party she planned for him. The current face of Chanel and Balenciaga has spent the last few years attempting to break out of the Bella mold by racking up indies like the 2010 Joan Jett biopic The Runaways, Still Alice and an upcoming Woody Allen project.