Take one good look at Chris Pine and you may think it's clear why we love him so much. But believe it or not, there are some deeper reasons beyond the 35-year-old's stunning good looks. Since his latest flick "The Finest Hours" is set for release on Jan. 29, 2016, let's take a look at the top 10 things we adore about him. Keep reading…

No. 10: He has a healthy appreciation for the biz

We love that Chris Pine isn't a first-generation star. Not only were both of his parents actors, but so was his grandmother on his mom's side, Anne Gwynne — a big-time horror actress back in the 1940s. And his dad Robert Pine was a regular on the classic '70s show "CHiPs" with his mom Gwynne Gilford, who had a guest-starring role on the cult cop series.

On a 2014 episode of "The Ellen DeGeneres Show," the talk show host revealed an adorable image of Chris Pine back in his high school days. We just can't get enough of those bowl-haircut bangs! And it's refreshing to know that someone as fine as Chris is now could have such a nerdy yearbook pic like the rest of us.

Chris Pine didn't skip out on school for acting. In fact, in 2002, he graduated from the University of California, Berkeley, with a bachelor's degree in English. Then he continued honing his craft at the American Conservatory Theater in San Francisco.

We love how Chris Pine transcends movie genres. He's great in everything, from rom-coms to action thrillers. He nailed the token hot-guy role in chick flick "Just My Luck" with Lindsay Lohan in 2006 and owned the part of the buff lead in the 2014 drama "Jack Ryan: Shadow Recruit." Plus he's no stranger to the small screen: He played a drunk patient on "ER" in 2003.

Chris Pine has been playing reckless, brilliant James T. Kirk, Captain of the USS Enterprise, since the first "Star Trek" reboot came out in 2009. He was also in the 2013 sequel, "Star Trek: Into Darkness," and is set to reprise the role again in 2016's "Star Trek Beyond." Who doesn't love a hot man who loves Sci-Fi?!

No. 5: He's a fan of female superheroes

Chris Pine loves a good female superhero. Chris made it clear how supportive he was of co-star Gal Gadot when she took on the lead in the 2017 film "Wonder Woman" (he plays her handsome love interest), telling Total Film, "It'll be a [expletive] blast. I couldn't be happier to be supporting Gal in what's going to be the first female-driven superhero film." Girl power!

We can't hate on Chris Pine pine for having a strong game. Heck, we give him kudos for the bevy of women he's romanced in real life. He was last linked to "Vanderpump Rules" star Vail Bloom in May 2015. But before that, he reportedly dated Zoe Kravitz, Olivia Munn, "The Hills" star Audrina Patridge, model Dominique Piek and Icelandic beauty queen Íris Björk Jóhannesdóttir, who won Miss Reykjavík 2010. Whoa!

We adore how much Chris Pine cares about grooming, especially when it comes to keeping up his beard. "I really like the ritual of shaving," he told Allure. "I like getting the perfect brush and finding the right sandalwood soap. The act of shaving, though, is not fun. I like beards and the ease of them." Any guy who pays such close attention to detail on their upkeep gets an A-plus in our book. Sandalwood soap, Chris? Yes.

No. 2: He does casual really, really well

We can't get enough of Chris Pine in casual clothes. We know it sounds a little silly, but a simple white tee is everything when it's on Chris. Sure, he cleans up well and can wear the hell out of a suit on the red carpet, but few men look this great in a regular old shirt, sweater and jeans.

We absolutely, positively swoon over Chris Pine's piercing blue eyes. There's really not much more we can say. Just take a minute to gaze into those crystal pools… 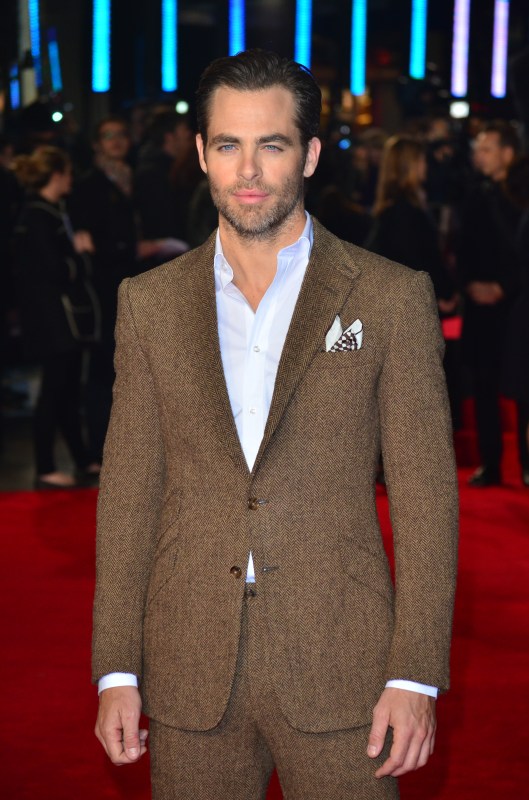